Insight: Will Shifting Dynamics Result In A Changing Of The Guard? 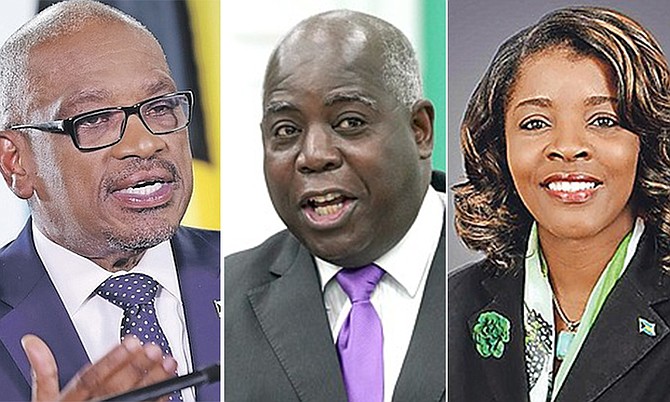 FROM left, FNM leader Dr Hubert Minnis, PLP leader Philip ‘Brave’ Davis and DNA leader Arinthia Komolafe - but who will be at the helm of the next government of The Bahamas?

AS the political temperature heats up with just a year until the next general election, the Bahamian electorate will have many questions to ask. After Hurricane Dorian and the economic wrecking ball of COVID-19, any political party would face a struggle to stay in favour with fickle voters.

After 25 years of the Pindling-led PLP which supplanted the UBP, Ingraham and the FNM claimed victory in the 1992 general election – and that was the last administration to hold office for multiple terms.

Since 2002, the Bahamian people have swung back and forth between the Progressive Liberal Party and the Free National Movement, cementing our reputation of being a two-party country.

When Branville McCartney, a former Cabinet member in the Ingraham administration, became frustrated with his party and was eventually fired, it led to the formation of the Democratic National Alliance ahead of the 2012 election, it was the first time a third party seemed as though they would be a threat. While not being able to build enough momentum to win the election, the DNA certainly ensured that McCartney’s former colleagues lost it.

Wrestling the grip on power in politics from the establishment was what the ideals of the modern Bahamas were built on – tenets which many Bahamians felt were strayed away from over the last five decades. This much became evident ahead of the 2017 election when social activism became the catalyst to what many citizens had hoped would be a revolution in the shape of the We March movement.

This signalled changing dynamics in the political environment – where a unifying message may have been the first blow weakening the current establishment before something new could be built. As younger Bahamians have had the opportunity to be more engaged in the political process over the past two decades and find many hard to tell the difference between the two major parties, it becomes even more of a possibility for us to witness history.

Heading into its third election, has the DNA motivated Bahamians enough to become the next government? Has the PLP done enough to revamp its image? Has the FNM done enough to convince the Bahamian people that they’re worthy of a second term?

Even though DNA leader Arinthia Komolafe receives tremendous adulation, she competes with primitive perspectives over a woman’s ability to lead a country. For PLP leader Philip Brave Davis’ part, he competes with his party’s image and his proximity to its failures during his tenure in the last PLP administration, as he was the former Deputy Prime Minister.

Prime Minister Dr Hubert Minnis, while in some quarters receiving sympathy for the challenges his administration has faced, still has questions over his ability to lead effectively. After all, true leaders recognise ahead of time that governance is not an easy job.

Continuing to ponder where each scenario leaves us, if we take into account the realities of Bahamian politics, there are not enough independent candidates who the Bahamian people take seriously enough to move the needle.

But what must be considered is the energy that surrounded the We March movement in 2017.

Nevertheless, what it has also done was lay a blueprint for what may not be a revolution, but perhaps an evolution.

Activist Lincoln Bain is no stranger to politics but has gained more notoriety of late for taking a page out of Henfield’s book – amplifying a message that can unify Bahamians in pain in the form of a Bahamas Evolution – a push for Bahamians to receive their piece of the economic pie through the sovereign wealth fund.

The past four years under the Minnis administration have been anything but the people’s time. After being hyper-critical of the former government’s decision to implement value added tax, the trust between the government and the Bahamian people was severed when VAT was increased from 7.5 percent to 12 percent. Then after Hurricane Dorian and the COVID-19 pandemic, along with government policies which effectively shut down the economy, only die-hard FNM supporters and vehement PLP opposers still consider giving the government a second term.

Even individuals from those two groups struggle with the idea of handing Minnis the keys for a second term.

But who is the alternative? Is it Komolafe? Is it Davis? Is it Bain? Will Minnis remain the leader of the FNM as prospects of losing the election become more apparent?

Answers to these questions will naturally come to the fore as political strategists in each party factor in what matters. Assuming that what guaranteed victories 20 – or even ten years ago - will do the same today will be a costly mistake. As younger voters have had enough time to see what’s in the marketplace and tough times have taken over as a normal way of life, promises of transforming the economic futures of every Bahamian seem to become a very reasonable place to begin a conversation.

The Bahamian people are tired of the same old script, different cast brand of political leadership. Whether it results in a win or loss for any of the parties vying for leadership of the country will be one of the most interesting storylines as we move through election season.

For the most part, the Bahamian electorate is wiser, more educated and understands more the impact of their vote, not just locally but outside the borders of the country. The Minnis administration had to walk a tightrope since it won at the polls some four years ago. And the road ahead is still unclear a d full of challenges. The resounding victory of the FNM at the polls was indication that the people had had enough of the PLP, their corruption, their favoritism and their failures and incompetence as a government. The wounds and pains of the PLP are still being felt. The people are not ready to return bro the torture of the PLP, ask them. And whilst the DNA, led by Komolafe May appear as the greener grass over the fence, can the country take such a gamble in such a time as this? Do you want an untested captain andt rookie crew in the middle of deep and treacherous waters when the ship is already battered and torn, but the crew is tested and willing to press on?

Any party can make outlandish promises but in reality we all know or should know that it is impossible given all that has happened over the last three years for any government to forefill its pledges. People seem to forget that running a country in simple terms is income in expenditure out and if expenditure is greater than income then you have to borrow. A sensible person or government if is to continue to manage the country has to reduce expenditure. Does anybody really believe that the PLP faced with a devastating Hurricane, and Covid and collapse of tourism could have done any better. The answer is a resounding NO. Every country is deep in debt, with massive unemployment but in most cases has alternative sources of income unlike the Bahamas. Go ahead vote in the old PLP and see if they have a magic wand because I can assure you 100% they do not.

I wouldn't even try to predict who'll win the next election. Both parties (FNM and PLP) suck and the DNA is and always will be a non starter.

Our choice is simple. Incompetent or incompetent.

I can honestly say though, no administration has been as bad for Grand Bahama as this minnis led FNM. If the FNM has any concern for our country they'd get rid of minnis. The man is useless...

It would be interesting to see the DNA get a few seats so that a coalition government would be the only option. We can then hopefully have a real government program for the next years and they can keep their governing partner "honest" by holding them to the agreement.

Comrade Sonkai, time goin' tell if constituents across the colony are in the mood to reward the DNA, a party that self-muted itself during Hurrican Dorian and COVID crisis, with their Xs?

Maybe the guards change, but not the orders of the globalist, the neglect, political chicanery or lack of fulfillment and dedication to the working class remains. The Imperial state department and privilege/favored classes rules always, regardless.