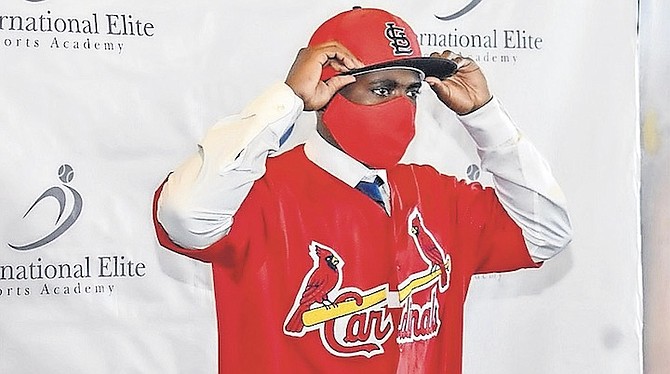 ADARI GRANT, of the Bahamas, officially became the newest member of the St Louis Cardinals organisation. He signed his contract to join the club among family and well wishers at the Pelican Bay Resort in Grand Bahama yesterday. Photos courtesy of 10th Year Seniors

Adari Grant returned to Grand Bahama to celebrate the next chapter of his baseball career as he officially became the newest member of the St Louis Cardinals organisation.

Grant signed his contract to join the club among family and well-wishers at the Pelican Bay Resort in Grand Bahama yesterday.

The 17-year-old 5’11” 163-pound shortstop, out of the International Elite Sports Academy, headlined the group of 15 free agents signed by the Cardinals to open Major League Baseball’s 2021 International Signing Period.

“I don’t know how to express my feelings, it’s surreal. I feel excitement, but I’m also anxious to start my professional career and I know I’m going to make everyone proud and represent The Bahamas very well,” Grant said following the ceremony.

“My mindset and attitude will be the same as always. Although I signed, nothing has changed, I’m going to keep the same underdog attitude, the same work ethic, go at it 24/7 and never let up. That’s how it is and how it always will be. I have to turn it up, I have to go harder, I have to stay committed and once I do that I know I’ll make it.”

With his signing, Grant became the first Bahamian player to join the Cardinals organisation.

Grant spent his early years at Sunland Baptist before he left Grand Bahama for Georgia Premier Academy in Statesboro, Georgia.

He eventually made the transition to I-Elite where he completed his high school education and took his final steps toward professional baseball development.

His mother, Philcher Grant, said each decision was made with a singular goal in mind - to achieve the dream Adari spoke about as a pre-teen.

“There’s no words a mother can use except proud. Proud that he took a chance to gamble on his dreams at such a young age. Adari told me at the age of 12 ‘I want to be a professional player’ and he gave everything to it. He sacrificed a normal childhood, going out with friends and having fun. He had to do two years in one to graduate because that was my deal - ‘you don’t sign until you graduate’ - so he finished a half-a-year early to do this and he never once wavered,” she said.

“He sacrificed, he put in the work and I’m so proud of him.”

I-Elite was founded by directors Geron Sands and Albert Cartwright. It provides an avenue for players between the ages of 11 and 17 years an opportunity to hone their skills with the view of playing at the professional level.

“I-Elite is one of the first academies of its kind in The Bahamas. We use customised and professional training to develop and assist aspiring professional and collegiate athletes to reach their goals,” Sands said.

“Over the past six years, we have been a part of helping over 20 young men fulfil their goals of making it to professional baseball with eight different organisations. While doing that we were able to secure college or high school scholarships for another 15 young men. We believe that kids are the future of The Bahamas and investing in them is the only way to make our country a better place.”

Sands said he saw the signs of a professional player early in Grant’s days with the programme.

“Adari came to I-Elite as a kid that only wanted to play in the big leagues. From he got to Nassau he had one goal in mind, he was determined to prove everyone wrong that thought he wasn’t good enough. Adari knew he had to put in multiple hours of work more than anyone else to get him where he needed to be. He never complained one day about being tired, his only focus was being the best player he can be,” he said.

“He dedicated himself to becoming a better all around student athlete. Many kids today want to become a professional athlete but not a professional student. One without the other usually doesn’t end well because there is always life after sports. Today we are here to celebrate his first step toward his ultimate goal.”

Cartwright added: “It’s always a unique situation when you have a guy from Grand Bahama uproot his home to come to Nassau and go to work everyday not knowing what the outcome will be. He said: “So we thank the Grant family for trusting in us to allow us to help make Adari a better baseball player and a better man.”

Luis Morales, Cardinals’ Director of International Operations, said Grant’s strong support system will be vital as he looks to progress in his pro career.

“It is impressive how everybody came together today. It makes us happy about the support system he has in this very difficult sport. He already knows because he went through it when he moved to Nassau and when he had to travel to the Dominican Republic or in the United States to play for different teams - this foundation and his family is going to help him throughout his career,” Morales said. “This is a market that has been growing alot in the last couple years and we are very interested in finding players in this country. We were happy to find Adari, to get to know him and now finally to sign him and now he’s becoming a part of the St Louis Cardinals family. This is just the beginning, the goal is to make it to St Louis.”