Peter Young: Silence In Court - Hit The Mute Button: Tradition And Technology In The Justice System 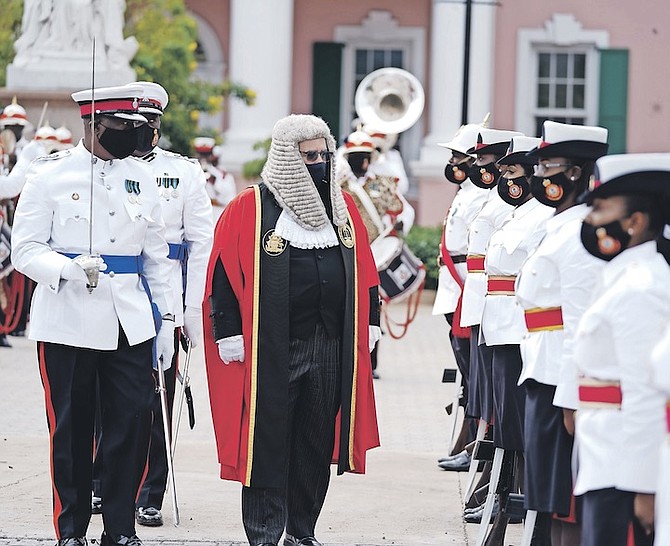 IT was a pleasure to receive again this year an invitation to the ceremony to mark the opening of the new Legal Year. This time, because of coronavirus restrictions there was no traditional service at Christ Church Cathedral nor the usual crowded gathering in the Supreme Court to hear addresses by the Attorney General, the Chief Justice and the President of the Bar Association. Instead, there was a “virtual ceremony” held last week out-of-doors in Rawson Square with limited attendance and live television coverage.

The formality, order and solemnity of last year’s ceremony was noteworthy. But, to my eye, this year’s three-hour event was equally good in its different way. With attendance by the robed and bewigged justices and the presence of the excellent Royal Bahamas Police Force Band and a Guard of Honour, there was appropriate pomp and pageantry and it was a worthy, dignified and impeccably well organised occasion.

There seemed to me to be an unusual sense of expectation as people wanted to hear from Chief Justice Sir Brian Moree what progress had been achieved in the face of the unprecedented challenges posed by the virus pandemic – in implementing the ambitious reform and modernisation programme he had announced this time last year. But, first, in what looked to be a fine initiative, we heard from his counterparts in five different Caribbean countries who, at his invitation, had pre-recorded messages about their own administration of justice. These were in a spirit of regional co-operation and collaboration that might be beneficial to all, particularly in dealing with cross-border disputes. These addresses were then followed by an informative, comprehensive and interesting one by the Attorney General.

In the Chief Justice’s much-anticipated main speech, it would surely not have surprised anyone if he had claimed that the enormous difficulties of the past year had set back his reform efforts. Instead, he explained that at the start of 2020 the nation was recovering from Hurricane Dorian but the subsequent months were the most difficult in modern times and he and his colleagues had had to rethink how justice should be delivered. But he was determined to overhaul the machinery of justice and create a more effective and independent judiciary consistent with The Bahamas’ standing in the world as, historically, a strong and successful parliamentary democracy.

It had been a period of change and consolidation and, as he said, ‘necessity is the mother of invention’. So, in a way, the new constraints arising from social distancing requirements served to speed up the reform and modernisation process because there could be no question of simply standing still with the existing procedures.

This is not the time or place to describe the reforms in detail and they have anyway been covered already in the press. But, in summary, it has become apparent that in the modern world access to justice may not necessarily mean access to courts in the traditional manner, though the delivery of justice should remain fair and available to everybody. As a result of technological advance, more use can be made of remote hearings conducted by live video link and using virtual platforms, leading to a reduction of physical court appearances; and there could be more so-called ‘judge alone’ criminal trials. The Chief Justice has made clear that the key is greater digitalisation across-the-board that should result in better administration of court procedures and greater all-round efficiency.

He has announced introduction of an integrated case management system to be installed and completed within 12 months. This would transform the conduct of cases – to include, for example, automated dates and timings of hearings and of payments in the Family Court and for bail applications together with improved access to digitalised data and information, much of which was previously contained in paper records that were too often hard to access.

Overall, however, Sir Brian’s remarks about the general autonomy and financial independence of the judiciary were perhaps the most telling of his whole address. Indeed, as far as I could hear, he suggested the drive for greater autonomy and control of the judiciary’s own resources for the administration of justice – rather than such financing being dictated by politicians – was one of the most important projects of his tenure. Thus, he welcomed the Court Services Bill, tabled recently in the House of Assembly, which was ‘transformative’ because it would give the judiciary a higher level of financial, administrative and operational autonomy.

This time last year, although many people surely welcomed the then newly-appointed Chief Justice’s innovative ideas, there were equally those who wondered whether reforms could be implemented effectively. Such doubts may have been reinforced by the huge challenges precipitated by coronavirus. So, in unprecedentedly difficult circumstances, the successful continuation and consolidation of the reform and modernisation process has been all the more remarkable and impressive.

It is now certain that this process will continue apace under the expert and vigorous direction of the Chief Justice and that such reforms will serve the country well as it recovers from the pandemic and regains its strength and equilibrium after the worst year in living memory. Those who watched last week’s ceremony and listened to the various presentations must surely have been reassured that the administration of justice in The Bahamas is currently in the best possible hands.

IT IS said that some historians regard the 1920s as the most explosive decade of the last century, though this is perhaps not the most apt description with, at that time, the seeds of another world war already taking root. It is famed as the ‘Roaring Twenties’ as the world recovered from the Spanish flu pandemic that lasted for two years, infecting about two thirds of the global population and killing some 50 million. Does that sound eerily familiar a hundred years on?

In 1920, the world looked a very different place. The First World War, which up to then had been the deadliest conflict in human history, had recently ended. The 1919 Treaty of Versailles imposed such harsh conditions on the defeated Germany that many believed another global war would become inevitable.

In the US, the decade was an unprecedented period of dramatic social and political change together with economic growth, affluence and prosperity – though not for all – thanks to major technological advances and inventions and the mass production of consumer goods. There was also an outpouring of relief after four long years of war followed by an increase of personal freedom – and a hedonistic life style developed, with the Jazz age and dancing the ‘Charleston’ becoming all the rage.

As for major events, the decade saw – to cite a few examples – the establishment of the League of Nations (the forerunner of the UN), creation of the Soviet Union and the founding of China’s Communist Party. Women gained the right to vote; the Irish Revolution resulted in partition and the creation of the Irish Free State; the BBC was formed; penicillin was discovered; Prohibition resulted in the growth of organised crime with the notorious Al Capone and the Saint Valentine’s Day massacre; Charles Lindbergh made the first solo non-stop trans-Atlantic flight from New York to Paris; writers like F. Scott Fitzgerald, Ernest Hemingway and T S Eliot emerged; John Logie Baird in Britain developed the first TV transmitter; and in 1929 the first Academy Awards or Oscars for film-making and film actors were held in Los Angeles.

As the decade ended, however, there was the Stock Market crash of 1929 that led to the Great Depression. The reduction of world trade in the 1930s seriously affected production in Germany whose economy collapsed with hyperinflation and this contributed to the rise of fascism and ultimately the Second World War.

In light of this complicated and varied history and because the conditions of life are now so different, I believe it makes little sense to try to draw parallels with events of a century ago other than to hope that our political leaders and budding statesmen at least study the past and learn lessons from it in order to avoid making similar mistakes. Life has changed so radically and, rather than look for indicators from the past, it is likely to be more productive to look at what is facing us now.

Such is the influence and economic power of the US that its tentacles reach far and wide. Closely linked as we are to our giant neighbour, its fortunes and its policies affect us disproportionately here in The Bahamas. Thus, the future actions of a Biden administration matter to us.

On the basis of what we know so far, in world affairs he will move back to multilateralism and the US is almost certain to rejoin the Paris Climate Accord, the Trans-Pacific Partnership, the UN Human Rights Council and the WHO. He is also likely to consolidate his predecessor’s work in brokering the normalisation of relations between Israel and various Sunni Arab states as well as rejuvenating the Iran nuclear deal. But the US and China could clash over Taiwan and the pundits are warning of a world food crisis, since the pandemic has disrupted food supply chains, while global debt from increased spending on the virus could explode.

It seems that on the domestic front the deepening political division, tribalism and polarisation in the US is beginning to scare people as the scope of it is becoming more apparent. Many have been particularly shaken by the assault on the Capitol Building and are now concerned to see large numbers of the National Guard on security duty in Washington to protect the symbolic core of American democracy on inauguration day against its own citizens. Is it any surprise that people now ask how all this fits with Thomas Jefferson’s reputed claim that his own state of Virginia was the ‘cradle of democracy’?

After the hell of 2020, perhaps a spirit of optimism for the new decade will gradually emerge but the portents are not good. The sad fact is that in modern times the future has seldom looked so bleak.

DESPITE the unfavourable prospects described in my separate piece today, there should surely always be room for some measure of hope at the general level. I happened to spot in the UK press the other day an item about what has been termed in Britain “Blue Monday”. Reportedly, the third Monday of January is considered the gloomiest day of the year – Christmas is over, payday seems a long way off, the days are still short and New Year resolutions have already been ditched.

Such labelling of a day in January is hardly surprising since in the Northern Hemisphere this month is on average the coldest and most dismal of the year. Moreover, during a continued lockdown in Britain the challenges faced by many people in the middle of a cheerless winter seem worse than ever. All that said, however, people here at home will no doubt have noticed that, with some two months to go before the clocks go forward, the days are already getting slightly longer. This, of course, happens every year. But, when it becomes noticeable, it gladdens the spirit and tends to put people in a more hopeful frame of mind.

What is more, with a COVID-19 vaccination programme perhaps becoming a reality at last, and the Prime Minister’s comment in last week’s national address about the crisis that the ‘end is in sight’, many will say there are now grounds for some genuine optimism. But first we have to get through January – though at least “Blue Monday” has come and gone!