Junior Golfer Zion Next In Line 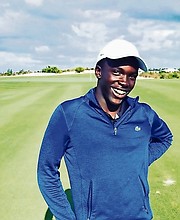 The 16-year-old Zion, who hails from Tambearly International School, is now holding his own as a student at Windsor School and a member of the Albany Golf Academy.

While at Tambearly, Zion played soccer as a centre back for the Western Warriors in the Bahamas Football Association’s youth programme. He made the junior national team at the age of 13.

But in grade nine, he left Tambearly to attend Windsor School and the Albany Golf Academy. By then, he had already established himself as one of the top junior golfers in the country, having made the junior national team at age 14.

“I chose golf because it started out as fun until coach Georgette Rolle saw something special in me and told me to start taking it more seriously,” Taylor said. “While I was playing golf, I was a member of the national team for soccer.”

Rolle, the director of the Fourteen Clubs Golf Academy, said she’s so proud of Taylor, who has emerged as one of the top three golfers in the 16-18 age group and one of the top five junior golfers in the Bahamas today. “I must have met Zion in 2014 when I did the Tambearly golf classes,” Rolle recalled. “We piloted the golf programme there. That was Zion’s introduction to the sport then. “Then, over the years, he did a little bit of golf and we encouraged him to stay in it. In 2018, his game was coming around a lot better and he got an opportunity to attend the academy at Albany.”

Having supported the move, Rolle said she felt it was the best and right fit for Taylor with all of the equipment to practice and the coaching expert from John Heart, one of the top 100 instructors.

“We were happy that Zion was getting that opportunity to be an inspiration to those youngsters who were coming behind him,” she stressed.

“He’s a great kid with a great personality. I think he’s going to be one of those who will put the Bahamas on the map. He’s good, he’s talented and he wants it. He’s in a great environment to do it.”

While doing online classes at Windsor School during the day, Taylor is engaged in golf lessons at Albany from 1-5 pm and then does gym workout between 5-6 pm.

“It’s a different environment in terms of schedule and practice,” said Taylor, who along with Heathcliff Kane are the only Bahamian golfers enrolled, along with more than 10 foreigners. “It took a while to get used to it, but I got the hang of it.”

Although he remembered the exploits of his older brothers, Dante, 27 and Tre, 24, Taylor admitted that Charisma, 21, his only sister, was an “inspiration and someone to look up too and be like.”

Like the rest of his siblings, who all attended college (Charisma, now with the Cougars' track team at Washington State), Taylor said he would like to eventually play division one golf and then become a professional player.

As a footnote, his father Dewey Taylor attended Jersey City University and his mother Patrice Taylor went to the University of Mary Washington.

Dewey Taylor, now a certified official in swimming, said he and his wife feel so blessed to be parents of four children, who all have been so athletically inclined.

“Our family motto has been that ‘I can do all things through Christ, who strengthens me,’” said the elder Taylor, who himself played all sports at St John’s College, but admitted that soccer was his first love with track and field being second.

“He (Zion) knows that I expect him to put God first and acknowledge that God is where he gets his talent and gifting from.”

The only other request he has for the younger Zion, as he did for the other three children, is give it their all once they decide to do something.

“Give it your best and if you had a bad day to just regroup and go back at it again the next day,” he stressed. “I have learnt over the years that we as parents put too much pressure on our children and this is not good for them.

“We should just support them, chauffeur, buy equipment, pay for tutors if necessary, show up to events and encourage them, but try your best just to only guide them. Let them set their goals.”

Having been down this road with all of his children, as a father, Taylor said he tries to just be there to hold them accountable to their own goals by reminding them when they fall short.

“I believe that if he stays focused and continues to keep up his work ethics and continue to have the favor of God, the sky’s the limit,” said Taylor of his youngest son, Zion.

Zion Taylor, making the adjustment from the soccer pitch, is expected to be in action from March 22-25 when the inaugural National Interschools Golf Championships is staged at the BFG’s nine-hole driving range at the Baillou Hills Sporting Complex.

Congrats Zion and keep your focus. I remember you at 13 in Jamaica. If you are interested in playing in college reach out to Cameron Riley who’s the number 5 ranked minority player in America. All the best to you and I will keep you and your family in my prayers...