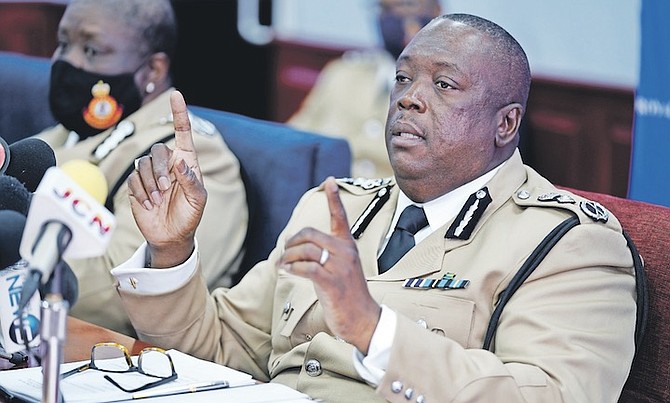 POLICE Commissioner Paul Rolle last night apologised for his comments about suicide victims, but claimed his remarks were sparked by questions from “pushy journalists”.

At a press conference on Monday, Commissioner Rolle said some of last year’s suicides were committed by “weak” men who killed themselves because they were having problems with their partners. His remarks triggered outrage from people on social media, especially those who have worked for years with people struggling with mental illness.

Suicides increased by 38 percent last year. On Monday, Commissioner Rolle also said there was no evidence to suggest that 2020’s lockdowns were to blame for increased suicides.

When contacted about the immense backlash to his remarks, he told The Tribune: “I was explaining that we did not do a scientific research on the cause and that really is not my specialty.

“What I do know is that there were about three cases which we identified as domestic-related based on info we got from their friends or their family. (The press) asked me, why is that and I said ‘I don’t know, maybe it’s just that you have weak men.’ That’s the context in which I said it. I apologise to those families and it was not intended to be that way. This is what happens when you have pushy journalists who refuse to accept the explanation given. I issue my apology for those comments to those families, it was in no way intended to cast aspersions on them.

“I spoke with Dr (Wendy Fernander) this morning. She contacted me and expressed her concern with it. I took what she said and so you have where we at now. She’s the chairperson of the Bahamas Psychological Association. I took the comment. I took my spanking and we move on.”

“These comments by the COP are unfortunate and distasteful,” Mr Roberts said. “He is unqualified to make such assumptions and should apologise to the families.

“To equate mental illness or emotional distress to being weak is to downplay the seriousness of these issues and to make such a statement, as the senior law enforcer in the country, shows just how unlearned and insensitive he is to such matters.

“I am highly offended and disappointed.”

Meanwhile consultant psychiatrist Dr John Dillet said the police chief’s comment appeared to be insensitive to those with mental health issues. He also said the COVID-19 pandemic has had a negative impact on many Bahamians, while there has also been a rise in the number of mental health conditions around the world due to the situation.

Given the circumstances, he said leaders have an obligation to set a supportive tone.

“I want to start by saying that I believe the commissioner’s heart is in the right place and his wish is to enhance the safety and well being of the citizens of the Bahamas. So, I acknowledge the difficulty of it,” Dr Dillet told The Tribune yesterday. “I do believe, though, that leaders have a responsibility to set a supportive tone when it comes to mental health and the plight of many individuals struggling with mental health conditions.

“The comment did appear in some ways to be insensitive to the needs and the plight of individuals with medical conditions.

“I would encourage the commissioner to reach out to mental health professionals if he has any concerns or questions. I can say unequivocally that the COVID-19 pandemic has had a negative impact on the mental health of many of our citizens.

“We’ve seen a rise in the number of mental health conditions and it’s been proven by research in the world that persons who are already under enormous amounts of stress in our communities because of day-to-day responsibilities have seen an increase in those stresses as a result of COVID-19 because of many issues such as lack of access to healthcare, lack of financial resources, because of the pandemic and the strain it’s placed on the economy (and) the added stress of being on confinement and being isolated have all increased the amount of stress in our society. So, certainly it is something that we have to deal with and something that is real to people in terms of what they’re going through.”

Dr Dillet continued: “I would encourage and I’ve always had a good working relationship with people in law enforcement - I think mental health issues affect almost every family in the Bahamas, our loved ones, our brothers, our sisters, our children, our grandparents, our colleagues, our friends. We all know someone probably with a mental health disorder and have struggled with it.

“I would encourage leaders to set a supportive tone in these public statements or public press conferences to remind individuals that we should reduce the stigma and stereotype of individuals that may have mental health problems that there are resources available to assist.

Dr Dillet said resources are available at the Community Counseling Assessment Centre on Collins Ave, the Crisis Centre, as well as the psychiatric clinic at some of the outpatient clinics such as Fleming Street Clinic.

Sorry but no matter ho much this man takes his spanking and moves on, His Mind set will not change, Bigoted disrespect for anything that challenges his Mind...

So is the Commissioner admitting that due to the Press he was "weak" and was pushed around?

So the COP supposedly apologises. I say supposedly because he seeks to blame his answer on the journalist? Really. How low can you go?

I give him credit for at least having the wherewithal to at least say apologise for the statement. But trying to pass it off on the journalist question. That is just WEAK!

The media made him say it?

Geez this guy can't even give an apology without casting blame!
Only a weak man, can't take responsibility for his own actions! SMH 🤦‍♂️

And just think, Minnis and Dames threw their weight behind Paul Rolle being appointed police commissioner. Minnis and Rolle certainly have a lot in common when it comes to being arrogant, nasty and vindictive. Nothing but big bullies with little grey matter between their ears!

Should have pointed out that what Brave Davis said was equally distrubing.