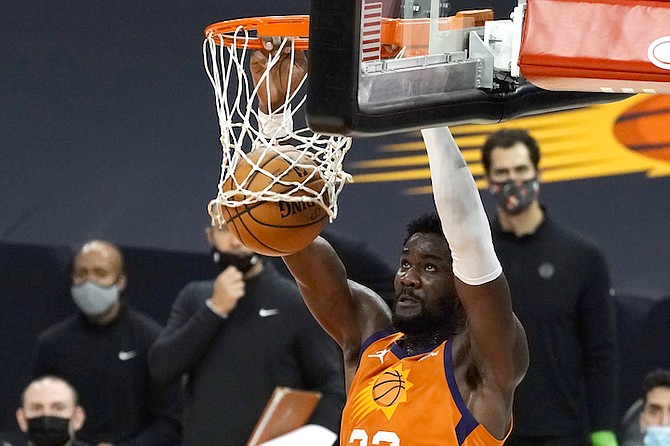 PHOENIX Suns centre Deandre Ayton (22) dunks during the second half against the Denver Nuggets on Friday in Phoenix. The Nuggets won 130-126. (AP Photo/Rick Scuteri)

DEANDRE Ayton continued his streak of double doubles for the Phoenix Suns while Chavano “Buddy” Hield and the Sacramento Kings had their first game of the season postponed due to COVID-19 protocols.

Ayton totalled 17 points, 13 rebounds and two blocked shots across 38 minutes in a 120-112 double-overtime loss to the Denver Nuggets at the Suns Arena in Phoenix, Arizona, on Saturday.

It was his fourth straight double double. He shot 7-14 from the field, including 1-2 from beyond the arc, but fouled out in the first overtime period.

It was the Suns second overtime loss to the Nuggets in three days.

In the four games since the Suns returned from three missed games due to COVID-19 protocols, Ayton has posted per-game averages of 22 points, 14.8 rebounds and two blocked shots.

Following a January 11 game against the Washington Wizards, the Suns had games against the Atlanta Hawks, Golden State Warriors and Indiana Pacers postponed.

They returned on January 18 in a 108-104 loss to the Memphis Grizzlies where Ayton had 18 points and a previous season high 16 rebounds. He followed with 26 points, 17 rebounds - both season highs - and a career-high five blocks in a 109-103 win over the Houston Rockets Wednesday night at the Toyota Center in Houston, Texas. He shot an efficient 11-15 from the field and also added three assists.

Hield and the Kings were scheduled to open a six-game road trip with the first of back-to-back matchups against the Memphis Grizzlies. However, both games were postponed by the NBA due to COVID-19 protocols.

The Grizzlies had three games postponed “due to unavailable players for the Grizzlies and contact tracing for others players on their roster.”

It was the first Kings game to be postponed this season. The NBA has postponed 19 games this season due to COVID-19.

In their last appearance, the Kings ended a four-game losing streak and won just their second game in January with a 103-93 win over the New York Knicks at the Golden 1 Center in Sacramento, California. Hield finished with 11 points.