Family: We Did Not Organise Junkanoo Rush For Funeral 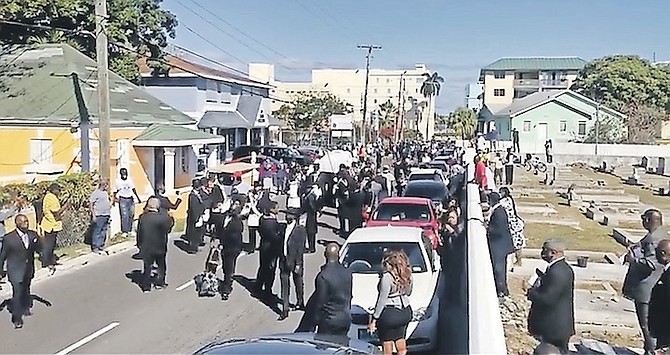 An image from the video showing the funeral for Ted Sweeting.

RELATIVES of the late funeral director Ted Sweeting insisted yesterday they were not responsible for organising a mini Junkanoo rush held in honour of their father on Saturday, saying family members were not even aware of Junkanooers’ plans until the day of the service.

Their comments came after videos made the rounds on social media over the weekend, showing a large group of people making their way down a street to a local graveyard in a mini-Junkanoo rushout, led by lodge members carrying Sweeting’s casket.

In one livestream capturing the event, the sizeable group can be seen playing their instruments as they enter the graveyard. And even when the cemetery ceremony begins, the overflow from the crowd could be observed lingering in the road.

The latest COVID-19 emergency order mandates that funeral services on New Providence, Abaco, Eleuthera and Exuma may only have a maximum of 20 people at the graveside only, not including the officiant and mortuary workers.

However, more than 20 people attended Saturday’s event. On Sunday, a representative at the Office of the Prime Minister said it did not give organisers special permission to host a large funeral service.

When contacted by The Tribune on the matter yesterday, Damian and Dominic Sweeting, sons of the Sweeting, clarified that many of the attendees at their father’s graveside service were mortuary workers.

Damian Sweeting also described the event as a “requiem mass”, insisting it was not a funeral procession or a funeral service.

He explained that after the family was unable to get permission from the competent authority concerning their requests for a funeral, church officials decided to hold a requiem mass.

“But to this day, they have not responded to us, so Archdeacon Cartwright, he decided by himself to have a requiem mass so, he did not have a funeral service because this day we’re still waiting on the competent authority to respond to us and they never responded to us…We (also) didn’t have a funeral procession.”

As it relates to the lodge’s role in the service, Mr Sweeting said the family had requested for his father’s lodge members to be the honorary pallbearers.

He told this newspaper: “(My father) was a past grandmaster in that fraternity. We requested for them to be the pallbearers because the whole family at the funeral home was in mourning and according to the orders, you could have 20 people to the graveyard and they didn’t put no figure on what mortuary staff could be there and everybody you would’ve seen in the graveyard, they would’ve either owned a funeral home or they worked to a funeral home. That was a private service. There were no bystanders.”

However, he admitted that the family was caught off guard by a small rush out orchestrated by a local Junkanoo group – of which his father was a member.

“Now, he was a prominent member of the Valley Boys as you would’ve seen the Junkanoo part. The Junkanooers didn’t tell us (what they were doing). They said they was going to pay tribute to him, and we didn’t know what the tribute was and that’s where the part came in,” he noted.

“None of that was planned and after Mr Cartwright said on the 23rd we were going to have a requiem mass, that’s what we did because it was time for him to be laid to rest. He didn’t have no funeral service. It was a private graveside service.”

He added: “The members of the Valley Boys called my brother... and said they wanted to pay a tribute to him. We was waiting for them to put something in the papers but they didn’t do that. They came out and did what they had to do. We weren’t responsible for them doing whatever they did.”

A police spokesman confirmed to The Tribune yesterday that no one was cited at the event, saying when officers arrived at the service to investigate the matter – “everyone dispersed”.

He said while the country was doing well in keeping COVID-19 infections low, people were letting their guards down.

He pointed to a number of funerals with attendees exceeding the number of people allowed and Junkanoo groups engaging in rush outs as an example of people becoming too relaxed.

Yesterday, president of the Bahamas Funeral Directors Association Kirsch Ferguson maintained that the organisation has been doing its part and abiding by the COVID-19 protocols.

“As far as the association is concerned, we have been doing just that and our members have been very vigilant and compliant with the orders and also have been encouraging families and keeping them abreast of what is presently in place,” he said.

Sometimes it is best to tell newspapers no comment and just keep quiet. The more they talk the more this doesn't sound good. Requiem mass but yet you have pallbearers? Seriously?

"police spokesman confirmed to The Tribune yesterday that no one was cited at the event, saying when officers arrived at the service to investigate the matter – “everyone dispersed"

Well there you go criminals... bring a crowd with you.. and disperse when the police show up

The results will be high covid numbers.. nuff punishment. Even with lockdowns and curfews we still don't seem to get it. The hospitals full.

there is enough space in a graveyard for social distancing

They sit in the house assembly right next to each other..