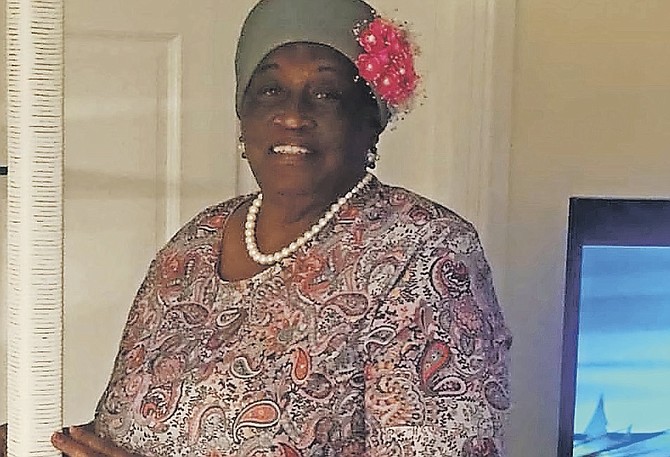 SANDRA MOORE, who died on Sunday.

TRIBUTES continue to pour in following the sudden death of Mrs Sandra Moore, which has left her family and the Grand Bahama community in shock.

Mrs Moore was a loyal wife, a loving mother, and a beacon of hope to many in the community through her church and her political affiliation. Her death on Sunday was an unexpected blow for many, including her family.

“It was a shocker,” her son, Malvin Moore said on Monday when contacted. “This is something we did not expect, but we are hanging in there. She (her death) knocked everyone off guard yesterday morning.”

Mrs Moore was in New Providence with her husband, former Ambassador and Cabinet Minister Maurice Moore, who is battling prostate cancer and undergoing treatments in Nassau. “They were planning to come back this week,” Mr Moore said.

“She was a very loving and loyal wife, and she nurtured him back to 100 percent – and it is just a shocker. She stood by my Father’s side. Mum was also somebody who you could talk to and go to for advice.

He said that Mrs Moore was not only a mother to him and his three brothers. “My mother had four boys, but there was an older brother before Mum, and three others and she took everyone in.

“Mum impacted our lives in every way. She instilled good manners in us from small. She taught us to have patience, to be humble and respectful, and to trust in God.”

Mrs Moore was an active member of the Good Shepherd Anglican Church in Pinder’s Point. “She was a part of everything around that church,” Mr Moore said. Through her church, she helped with feeding the hungry and helping the less fortunate in the community.

The Tribune was flooded with tributes to Mrs Moore.

“A devout Anglican, Mrs Sandra Moore was faithful to her calling as a Christian woman. and served in many organs of her local Church with charity and grace as Lay-reader, President of the Anglican Church Women, and member of the Vestry of the Church of the Good Shepherd at Pinder’s Point, Grand Bahama. Mrs Moore truly personified Matthew 5:16 which asks us all to ‘let our light so shine before men that they would see our good work and glorify our Father which is in heaven.’”

He said the Office of the Prime Minister, Grand Bahama, extends deepest sympathy to Ambassador Maurice Moore and the Moore Family.

Mrs Moore was also well known for her role as a supportive wife of a politician. She not only supported her husband, but was an honorary former president of the FNM Grand Bahama Women’s Association, having served as president from 1980 to 1983.

April Crowther-Gow says Mrs Moore was a role model and mentor to whom she looked up to from a young age. “Her impact upon my life has been so wonderful and cherishable. When I was told she had suddenly departed, it was quite an emotional moment for me yesterday,” she said.

“Sandra Moore was a beacon of hope, not just for her husband, her children, but for everyone that came in contact with her. Only God knows best when He makes a decision.”

Mrs Gow, immediate past president of the FNM Women’s Association, former Torchbearers Association president, and former deputy chief councilor of the City of Freeport, said she often called on Mrs Moore for advice and counsel.

She stated that Mrs Moore was passionate about helping people, particularly. “I know she would say, April, don’t be discouraged, you keep the fight going. We have too many women we have to heal, help and promote.”

“Ms Moore was an angel on earth. When you saw her, her smile and eyes lit up and she made you feel you were the best person. Ms Moore’s contribution to the community of GB, East End, Central Grand Bahama, Pinder’s Point, Pineridge, Lewis Yard, Mack Town should never go unnoticed. I hope when GB celebrates all of our victories that she is added to that wall of fame.

Peter Adderley said the Grand Bahama community will miss Sandra Moore. “During Sandra Moore’s life, I often thanked her for the true professional she was before retirement. She bore a warm personality and loving spirit. My mother is a big Sandra Moore fan. She was a woman of faith and a dedicated wife and mother. Family meant everything to her. I enjoyed seeing her and her husband at events together. She added much to the Hon. Maurice Moore’s successful political career and public life.

The Grand Bahama communities will miss her. As I mourn her death, I find joy in the prayerful hope that she is now in a better place. I extend heartfelt condolences to the Hon. Maurice Moore and the entire family.

“She was committed to her family, her church where she served as a lay reader, and to her Party, for which she was a strong voice for women and youth. She lived a Christian life and was a true example of godly living. I will miss her weekly messages and spontaneous calls immensely. She was a strong personal supporter who never wavered or questioned. She was solid in her defense of truth and was incredibly clear in what she believed. I will truly miss her sweet face and graceful personality.

“Sonia and I send our deep condolences to His Excellency the Hon Maurice Moore, her children, and to the entire extended Moore, Pinders Point, and FNM families,” Mr Turnquest said.