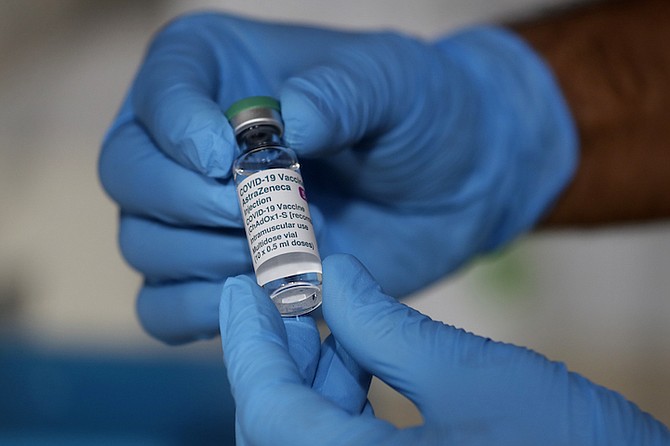 AS BAHAMIAN officials urge vaccination to push the country towards herd immunity, a Pan American Health Organization official revealed that less than three million of the Caribbean’s population has been vaccinated against the deadly COVID-19 virus.

Dr Carissa Etienne, PAHO’s director, made the revelation yesterday during PAHO’s weekly webinar updating the region on the fight against COVID-19.

Health Minister Renward Wells feels that 120,000 fully vaccinated Bahamians will put the country “in a good place” in the fight against COVID, but this number is well below the number needed for herd immunity.

As of June 5, 62,183 AstraZeneca doses had been given to residents of The Bahamas. Of this figure, 48,434 have received one dose. Meanwhile 13,749 people have had two shots, meaning they are fully vaccinated. This represents roughly four percent of the country’s population.

“Just two million people have been fully vaccinated in Central America and less than three million in the Caribbean,” Dr Etienne said. “Some countries like Guatemala, Trinidad and Tobago and Honduras have yet to administer enough doses to protect just one percent of their populations.

“The inequities in vaccination coverage are undeniable. Unfortunately, vaccine supply is concentrated in a few nations while most of the world waits for doses to trickle out. Although COVID-19 vaccines are new, this story isn’t—inequality has too often dictated who has the right to health.”

Minister Wells recently told the press The Bahamas is in line to receive some COVID-19 vaccines via the generosity of the United States directly. The United States is donating its excess to countries around the world through the World Health Organization’s COVAX programme.

He also said he is expecting a COVAX shipment of the Oxford-AstraZeneca vaccine sometime this week.

Dr Etienne thanked the United States for its generous donation to the world.

“While it’s true that vaccines will eventually help us curb the spread of this virus, progress has been uneven,” Dr Etienne continued. “In fact, today we’re seeing the emergence of two worlds: one quickly returning to normal, and another where recovery remains a distant future.

“The situation is particularly acute in Central America and the Caribbean. We’re thankful for the US government’s decision to donate an initial six million doses to countries in Central and South America. Spain has also generously donated five million doses to Latin America and the Caribbean. And we’re grateful to Canada, which has committed $50 million Canadian dollars to expand access to COVID-19 vaccines in the region.”

Dr Etienne said PAHO hopes other countries, particularly those with excess doses, along with global financial institutions will follow in the US’s footsteps to provide the support the organisation needs to protect the 70 percent of various populations that will not be covered under the COVAX programme.

“First, we urgently need to ramp up access to vaccines in the Americas,” she said. “While we need more doses everywhere. Countries at greatest risk, where vaccines have been slowest to arrive and even vulnerable populations have yet to be protected, urgently need more vaccines.

“Last week there were almost 1.2 million new COVID-19 cases and over 34,000 new deaths reported in the Americas, and four of the five countries with the highest death counts in the world were right here in our region.

“While COVID-19 infections are slowing across North America, localised jumps in COVID-related deaths are being reported in some states in the US and Mexico, and in some provinces in Canada.”

“In the Caribbean, Trinidad and Tobago reported the largest spike in COVID-19 infections and deaths over the past month, while hospitalisations in Haiti continue to stretch the country’s oxygen supplies,” she said.

“While infections are finally coming down in Costa Rica after weeks of accelerating cases, other Central American countries like Panama and Guatemala are still reporting a rise in new infections.”

The Bahamas has recorded more than 12,000 COVID-19 infections to date.

And Covid-19 numbers continue to DECLINE

they only go up when theres a bump in travel. "new" exposures. check it.

JOE BiDEN says the US will give away 500,000 dowse of the Pfizer vaccines to 100 ‘poor and medium income countries. Biden says it is to save lives. The facts are there are less than 100 countries recording more than 100 new cases of corona a day and more than 20 deaths. And half of these countries are ‘better off’ financially and have already carried out mass vaccinations of their populations. So does the US plan to give vaccines to countries that have experienced very few corona cases and even those with no deaths? Then what is this Delta variant?

JOHNSON and JOHNSON has applied and been approved by the FDA to distribute its vaccines beyond the four month shelf life. OBVIOUSLY the vaccination process is not moving as rapidly as expected and vaccines are going beyond their shelf lives. Now the risk of continuing to use these vaccines. Will they be dumped on poor and unsuspecting countries? Remember, The Bahamas had this experience under the Hubert Ingraham administration, when it accepted a donation of vaccines, only to discover that they had expired. Then the task and risk of exposing of them.

Bahamian scientists fails to find a new AZ vaccine threat. But EU doctors are smarter to could find it.