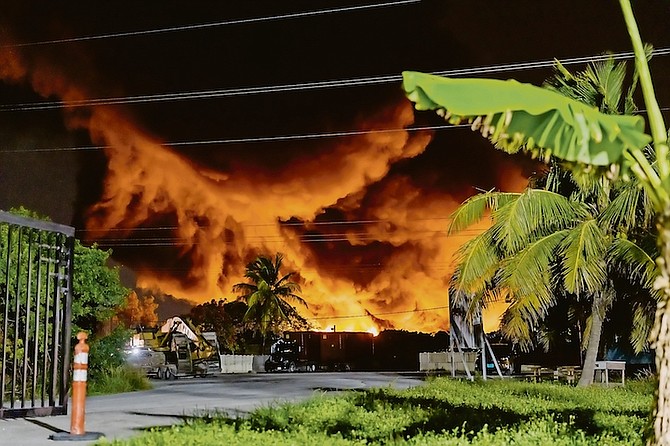 The blaze sent smoke billowing into the air and raised fears among nearby residents.

Officials emphasized that the fire was started at Manpower Scrap Metal, a private business that is not associated with the New Providence Ecology Park.

Assistant Superintendent of Police Audley Peters said police officers responded to the scene shortly before 8pm and, after assessing the site, realised the fire equipment could not reach the fire, which was at the centre of the property. Heavy equipment operators tried to contain the fire by erecting barriers around the flames on the western and northern sides. When he spoke to the press around 10.30, ASP Peters said firefighters were still determining whether to use their assets to extinguish the flames. He expected it to take hours to extinguish the fire.

The cause of the fire was unclear up to press time, but ASP Peters said old vehicles were in the area where the fire began.

No damage to building structures were reported but ASP Peters could not rule out the possibility that the fire would spread to nearby communities.

“I can’t say that I’m confident because you have a number of variables that you have to take into consideration, for instance the wind, ambers flying or a shift in the fire itself. What we will do is do our best to contain it as much as possible.”

Tall Pines MP Don Saunders said although the fire did not start at the landfill, it underscores the importance of regulating businesses in that area.

“We have to have a discussion beyond they ecology park,” he said. “This is evident that we have to have a wider discussion about how we keep this general area safe because we can’t have a whole compound that not only has the ecology park but also has other businesses and facilities. So I’m going to challenge my colleagues that we also have that discussion to ensure not only the ecology park does its part to stay safe because as you can see it isn’t enough for one facility to be putting in place all the mechanisms and protection they need but each and every business here has to play their part.”

maybe it is time to get rid of all these garbage and scrap piles in the Bahamas eh?