‘Officer’s murder was nothing to do with me’ 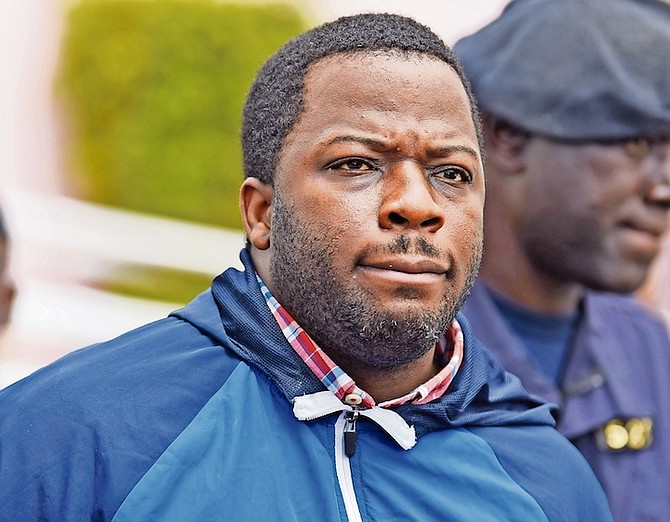 ABLE Seaman Jevon Seymour denied threatening to shoot Petty Officer Percival Perpall after the marine refused to let him use the Royal Bahamas Defence Force’s satellite phone to call his girlfriend while they were deployed on Ragged Island.

Seymour is charged with the shooting death of PO Perpall, along with the attempted murders of Marine Seamen Calvin Hanna and Ellis Rahming.

Police said the Royal Bahamas Defence Force officer was fatally shot when an assailant opened fire on the three men while they were on duty at Government House around 2.30 on the morning in question

Seymour has maintained his innocence.

A day after the prosecution closed its case, Seymour chose to go into the witness box to give evidence under oath.

During his testimony, he said around 11pm on April 27, 2019, he left his home to attend a Valley Boys Junkanoo party at the Farm. He said when he got there, he met “numerous” civilians as well as officers from the police and defence forces in attendance. He said it was a “celebration all night” and people were “drinking and smoking cigars.” He also said he had a WhatsApp status video of himself “chilling and enjoying” himself at the Farm around 1.30am on the morning in question.

Seymour claimed he left the Junkanoo party around 2.30am with his co-worker Marine Seaman Percentie to head to a soca concert at Breezes resort. He said he ended up seeing two of his co-workers in a skybox at the event and joined them for a “few more drinks.”

The court was told that the accused left the concert around 3.15am. He also claimed he had “another video” of him leaving with a Bahamian entertainer around that time.

Seymour said he then travelled east towards Goodman’s Bay, before riding downtown past Commonwealth Bank and a night club and making his way towards the Wulff Road traffic light. The accused said after he dropped his co-worker home, he continued onto Robinson Road and made his way to his own residence.

Seymour said he had known Perpall for “many years” and acknowledged going on assignment to Ragged Island with him and Marine Seamen Storr and Butler in March 2019.

When Mr Archer asked the accused if he agreed that Ragged Island was destitute at the time, the accused said only “defence force officers and a few people” were on the island.

He also agreed that the phone system on the island was down for some time, which resulted in the RBDF issuing a satellite phone to the officers.

Mr Archer then suggested the satellite phone prompted the first disagreement between Seymour and Perpall.

“You wanted to use the phone to call your girlfriend (but) Perpall told you the cell was for government business or emergencies only,” Mr Archer asked.

When asked if he threatened to shoot Perpall, he also said “no” and denied police travelling to Ragged Island to investigate the incident afterwards.

“So the following morning you happen to get (a) hook in your finger,” Mr Archer asked.

Mr Archer then suggested the accused just wanted to “get off the island where Perpall was,” but he denied this.

Yesterday, Seymour also said he only spent two weeks in Ragged Island. He also acknowledged the fact that he was declared absent without leave (AWOL).

However, he claimed the “charge did not come from Perpall.” He also said he and the petty officer were “supposed to go to court on May 9 for the charges brought against” him.

“You became enraged because Perpall refused to back up your story,” Mr Archer then suggested.

Still, Mr Archer stated that if Seymour was absent for about two weeks prior then took another two weeks off, it would add up to almost a month. He also noted if the accused had been convicted of the AWOL charge, he would have to forfeit a month’s salary of almost $3,000.

Nevertheless, Seymour insisted Perpall “never denied him any time off.”

“Faced with all these things in addition to the previous incident with Perpall in Ragged Island (caused) you to get enraged,” Mr Archer stated. “A week after Perpall returned, he was dead.”

“Has nothing to do with me,” Seymour replied.

The accused also insisted that he and PO Perpall “never had a problem” and he had “no reason” to go to Government House on the morning in question.

He further denied entering the guardroom and shooting PO Perpall “again and again” or attempting to “eliminate” the other two witnesses.

“You fired at Hanna and Rahming because they were there, but your objective when you got there was to kill Perpall; they were casualties of war,” Mr Archer suggested.

“Me and Perpall don’t have a problem,” Seymour responded.

Yesterday, Alexstine Daxon also took the stand. The Valley Boys event coordinator said she was the person at the gate distributing tickets and wristbands at the Junkanoo party on the eve of PO Perpall’s death. Mrs Daxon claimed she saw Seymour, a drummer for the group, at the party “sitting on a bench with a couple of fellows and smoking a cigar”.

She also said he was one of the last persons to leave and stated she “wouldn’t lie and go to hell for no one”. Mrs Daxon said there was also camera footage to show all of the people who were at the party.