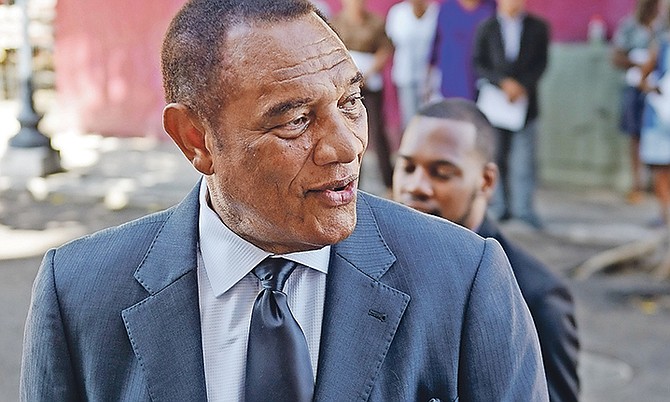 A former prime minister yesterday warned that COVID-19 has “only strengthened the resolve” of major nations to eliminate the competitive threat posed by The Bahamas and other Caribbean countries.

Perry Christie, making a rare public appearance in giving the keynote address at the Institute of Chartered Accountants of the Caribbean (ICAC) conference, warned that it was “not an option” for this country and others to lose financial services industries that have been critical to developing their societies’ middle classes.

The ex-PLP leader, who stepped down from the party’s leadership following the FNM’s 2017 landslide election victory, also suggested that there were “obvious answers” pointing towards the urgent need for tax reform in The Bahamas and wider Caribbean given concerns about fairness and whether existing systems are generating sufficient funds to finance essential public services.

Acknowledging that COVID-19’s devastating blow to government finances worldwide will only make G-7 and European Union (EU) members keener to drive international financial centres (IFCs) out of business, due to the perceived loss of tax revenues, Mr Christie argued that their initiatives over the past two decades have been more about eradicating competition.

“The real objective is to eliminate any competitive advantage IFCs have because of tax systems that are not identical to those of OECD countries,” Mr Christie said, in a nod to the G-7’s agreement on a 15 percent minimum global corporate tax rate.

“The global pandemic has only strengthened the resolve of those countries to eliminate IFCs. Protectionism has become the order of the day, whether they are likely to admit it or not.” He also agreed that it was especially troubling that the Biden administration is now ensuring the US provides “back up” for the initiatives already launched by the EU and Organisation for Economic Co-Operation and Development (OECD).

The former prime minister suggested it had been a mistake for The Bahamas and other IFCs to “got it alone” and seek “to negotiate with the big boys” alone, rather than as a bloc, as this had resulted in both themselves and their middle classes being whittled away by “1,000 cuts”.

Calling on the Caribbean to “sing from the same hymn sheet”, and use the high net worth residents living in many of its member states to lobby on behalf of regional IFCs, Mr Christie said: “Losing the facilitator of the middle class [financial services] is not an option.”

Some observers may ask why Mr Christie seemingly never implemented any aspects of this strategy when he had the chance while in office as Prime Minister. However, he yesterday agreed that The Bahamas and others in the region need to explore reform of their existing regressive tax systems for their own benefit and that of lower income members of society.

Arguing that the Caribbean’s economic future remains linked to tourism as the primary jobs and growth driver, Mr Christie called for a data-driven approach that would enable The Bahamas and others to know “to the zip codes” where the majority of their tourists are coming from so that they can better dedicate scarce marketing resources to where they will have the most impact.

“At our own peril we pay scant attention to ensuring every resident understands and can assist in ensuring the best experience we can for our visitors,” he said, adding that a data-driven approach could also help to “personalise” the guest experience for tourists according to their personal preferences and tastes.

“Annual hotel occupancies are in the range of 60-70 percent,” the ex-prime minister said. “If we manage to use the new analytical tools the way we desire, and move occupancies to 90 percent, we will increase the contribution to GDP by 50 percent without building one roof.”

Mr Christie also revealed that he had been motivated to launch The Bahamas’ National Development Plan (NDP) after discovering that Jamaica had leapt ahead of this nation in the World Bank’s ‘ease of doing business’ rankings.

“It was a shocking realisation to me, and I needed no further convincing of a National Development Plan,” he added, suggesting this could serve as “a template for the region” over its response to the COVID-19 pandemic.

Talk about a hard core fully indoctrinated Communist who believes everyone's station in life should be determined by big government run as an authoritarian police state!!

It's no small wonder why Christie and Minnis see eye to eye on so many things and the current corrupt Minnis led FNM administration has proven to be even worse than the last Christie led PLP administration.

Yup, the tyranny of big government is indeed upon us with Christie and Minnis having cemented for themselves and their cronies a well secured place among the few well endowed 'have's' while the vast majority of Bahamians suffer an increasingly miserable existence as the 'have nots'.

These government flunkies love to talk about a new tax on this, or raising taxes on that, but it is funny that we never hear anything about not pissing away the money that they do manage to collect. Doesn't matter, the hole is dug far too deep to ever escape from now.

You're completely right. Of course not a single one of these guys (Ingraham, Christie, et al...) talks about how much money went unaccounted for during their time. Probably because a good chunk of it found its way into their pockets. Just wait and see what will happen after the next election. If the PLP gets it, it will be time to fill some brand new empty pockets. If the FNM gets it, a lot more of the same crap we got now.

Here is the little secret the G7 didn't want anyone to know about. Google. You see before people book their visits, they research using Google. So you don't need to complain about Carnival and Royal Caribbean because you can contact their clients before they become their clients. Yes Google will sell you the information on anyone searching for a Caribbean vacation. You can even entice those looking at visiting another Nation to come to The Bahamas instead. OR...... we can complain about the foreign companies exploiting local vendors and sit on our hands.