Btvi ‘Is Trying To Intimidate Employee’ 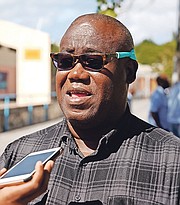 THE union vying to represent workers at the Bahamas Technical Vocational Institute has accused the facility of “trying to intimidate” an employee as part of an investigation to find out who was behind flyers circulated on social media about the school.

The flyer in question, which was circulated online in January, claimed there was a theft ring at BTVI, that an executive manager was involved and two people were fired because of it.

At that time, The Tribune reached out to BTVI’s chairman, Kevin Basden, who admitted there was an ongoing investigation into malfeasances at the tertiary institution, but did not confirm the firings nor the involvement of the executive manager.

Shortly after his interview, BTVI released a statement that exonerated the executive manager and admitted two employees were fired as the flyer said. The school has maintained there was no evidence of a theft ring.

A company was hired to conduct an investigation into the wrongdoing at the school, however the union said even though BTVI’s statement said the investigation was over, somehow a probe remains open into who generated the flyer.

On Friday, for the second time, an employee was called into a meeting with the investigators to be questioned about the origin of the flyer. The first time he was accompanied by Daniel Thompson, president of the Union of Tertiary Educators of The Bahamas. At the second meeting on Friday, the staff member reported with his lawyer and Mr Thompson, however the latter was reportedly ordered out by the investigator.

“They are trying to pinpoint the production and the promulgation of this flyer,” Mr Thompson explained. “BTVI told you that the matter of the investigation was finished. Why are they now coming behind my member to try to intimidate him? If you have evidence that he distributed this flyer then simply produce it so he can answer your charge.

“From I was there (BTVI) a few weeks ago I asked this investigator if he had digital fingerprints of my member being involved. He said ‘No, no, I am not saying that!’

“But he is acting like he is investigating a criminal. He came today again, without any evidence.

“The same security consultant very rudely and aggressively told me to come off the campus in my own country. Of course he is acting on behalf of the president. He was very rude to me. I know BTVI has no labour representation at the time, but I was there representing him in a private capacity.”

The Tribune reached out to Mr Basden about the allegations, as he had previously said the matter was closed.

“We issued a statement once saying investigations at BTVI were completed and we stand by that,” Mr Basden said. “It is completed. There is another matter where internal investigations are taking place, but we are not in a position to say anything at this time.”

However, Mr Thompson referred to this “new” investigation as a “fishing expedition” and a “Spanish inquisition”. He feels the investigator is simply prolonging the matter to earn his keep as there is no evidence to support his claim.

“They are asking him (the worker) about an IP address that is not his own,” Mr Thompson said. “That man (investigator) is trying to keep his contract. He is trying to show his worth.

“This is the same fishing expedition taking place again along with intimidation. They could not produce any evidence, beating around the bush. They are using this as an opportunity to union bust and to intimidate this gentleman because they suspect he is interested in being a member of UTEB.

“He has had a lot of challenges with his immediate supervisor who has been trying to get at him so this is an opportunity to union bust; the supervisor gets his cake and they have to somehow prove that they didn’t let this thing go out so someone has to be sacrificed. That sacrifice will not be my member! They claim to have a package full of documents. When the attorney asked to see the documented evidence they claim to have, they have refused to show it to the attorney.”

Mr Thompson said if the investigators have evidence against the employee, they should take it to the police so they can conduct a thorough investigation.