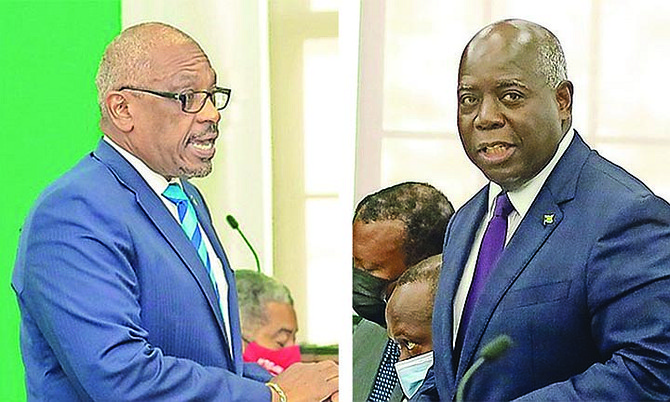 The bleak state of the country was reinforced last week when Prime Minister Dr Hubert Minnis delivered the Mid-Year Budget Communication in Parliament. Although Dr Minnis continues to sound optimistic, a rebound of the scale needed is untenable while we are still wrestling with COVID-19.

With government revenue down by $425m and expenditure up by $112m, the decision to borrow was seemingly easy to make. But now, as we wrap our minds around a ballooning fiscal deficit of $736.1m and a lopsided debt-to-GDP ratio of 78.8 percent, a pertinent question looms: How are we going to get ourselves out of this? Or perhaps, even better, who is equipped to get us out of this?

The Central Bank of The Bahamas has projected that things will get worse. Forecasting the country’s debt will tower to an eye-popping $9.5 billion, there is much cause for concern. It is worth noting that, historically, recessions typically lead to a change of government.

The National Bureau of Economic Research, having studied economic changes in America during election years, found that in each instance of a recession or harsh economic times, presiding heads of state were given their walking papers. As far back as Abraham Lincoln and as recently as Donald Trump, both former Presidents’ elections and firings were influenced by the state of the economy.

We cannot negate the fact other issues played a significant role, especially in Trump’s case, and that racial issues have been ignored for over 400 years. But, undoubtedly, the tipping point for Americans was the economy which was exacerbated by COVID-19.

Likewise, we, here in The Bahamas are in a hole we aren’t able to dig ourselves out of in the immediate term.

Parties vying for government ought to be careful in politicising the state of the economy during the election race. The Minnis administration’s commitment to providing social assistance to support Bahamians and buoy small businesses through grants and loans through the SBDC are laudable initiatives. But as we know, elections can lead to wild and unnecessary spending, and in some cases, more borrowing.

There has been a global appetite for borrowing during the pandemic with many countries having few alternatives. The World Economic Forum noted one of the consequences of the pandemic is that public debt levels, as well deficits, have hit record highs. And while economists are less conservative on the level of debt countries around the world are amassing to stave off an economic collapse, the importance was placed heavily on how the money is used and the interest level remaining low.

This means, among other things, it will be crucial for the government not to make decisions that are the antithesis of the fiscal record just because an election is on the way.

The Bahamian people agreed the Christie administration was a poorly run shop, blighted by fiscal recklessness, corruption and scandal. With an election battle that looks to be closer than some may be projecting, we hope the focus remains clear and that the Bahamian people are kept first.

Both sides have already started their campaign efforts - while speculation about when the bell will ring continues to build. Thus far, the Prime Minister has been non-committal on a date.

As the marketing engines have revved up for both parties, it is evident they haven’t spared any expense on advertising budgets. We’ve seen a plethora of ads with both Davis and Minnis selling themselves to the Bahamian people. And while this time of year usually leads to a lot of excitement, one can’t help but wonder if these funds are being used in the optimal way.

When we consider the challenges thousands of Bahamians are facing and may continue to battle with for an extended period, is this money well spent?

Moreover, unless we’re truly on the verge of a snap election, do both political parties intend to keep this up heading into the middle of next year?

Meanwhile, both men are trying to impress their respective portrayals upon the electorate – one as a healer and life saver, the other as someone who understands the plight of the Bahamian people.

Rather than self-promotion, how refreshing would it be for the money spent on advertising to instead, be used to make a tangible difference in the lives of Bahamians in a time as unique to our experience as this. Such an act would speak far more to the heart of the citizenry than an ad with a spirit that does not resonate with the times that we’re going through.

The Bahamian people need our leaders to come to us with real plans about how we are going to go beyond getting through these times with their encouragement, but also with their guidance and acknowledgement that we are in this together.

We never learn and accept the fact (clearly shown by the electoral farce in the USA) that 99% of politicians are in it to keep their jobs at any cost and what is best for the country is spoken but over taken by political self preservation. That being said obviously the FNM is being blamed and yes could with hindsight have done better just as in the UK but could all the wise armchair financial wizards please specifically state what they would do, dollar for dollar to ride out this worldwide unplanned for pandemic. Every country has seen its debt increase but wealthier countries are better able to budget and pay it back , but the Bahamas is small , with limited income options (PLP or FNM could not force foreigners or cruise ships to visit) and not only unbelievably inefficient at collecting revenue but has limited alternatives to traditional methods.

Time to go after the untaxed and under taxed economies in the country and stop saddling ordinary Bahamians with additional tax burdens and plunging them into poverty.

Both parties are lousy...no wonder why they're dropping like flies out of running again. Clean the swamp out plz👍💯

Your shepherd Malcolm is weighing in the balance and is found wanting.

he is taking you over a deep and dangerous hill.