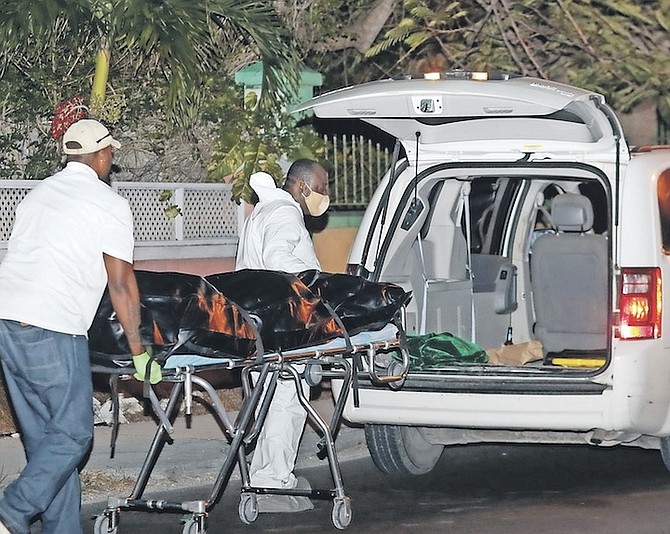 A BODY is taken from the scene after last night’s shooting. Photo: Donovan McIntosh/Tribune Staff

POLICE are seeking to identify the victim of the lastest homicide after gunshot wounds rang out shortly before 10pm last night.

Police at a checkpoint heard what appeared to be gunshots emanating from Bernard Road East.

Superintendent Audley Peters said at the scene last night: “The officers proceeded in the direction of the sound and they came upon a body of a male lying at the eastern boundary of LW Young School with what appeared to be gunshot wounds to the body. Emergency medical services were summoned. On completion of their examination they pronounced the body lifeless.”

The victim had no identification, and Supt Peters said: “Nothing of interest that could assist us even in determining his identity. We are appealing to members of the public who have a relative that is not home and particularly a male, dark male about 5’7’’ with plaited hair who has not been seen for a while if they can contact police.”

The victim appears to be in his mid to late 20s.

Supt Peters: “We are appealing to members of the public who have any information relating to this incident to contact the police at 502-9991 or 502-9992.”

He added: We want to advise members of the public that we continue to need their support in bringing matters of this nature to a resolution.

“I want to thank members of the public for their assistance with the recent matters that we were able to bring before the court and it is because of their goodwill that we accomplishing such success thus far with matters of this nature that occurred within this year.”

What is so ironic is the fact that the police need help, and they do, from the very public that they a lot of times show disdain for.