Wells ‘Not Disappointed’ That First Doses Of Vaccine Have Not Arrived 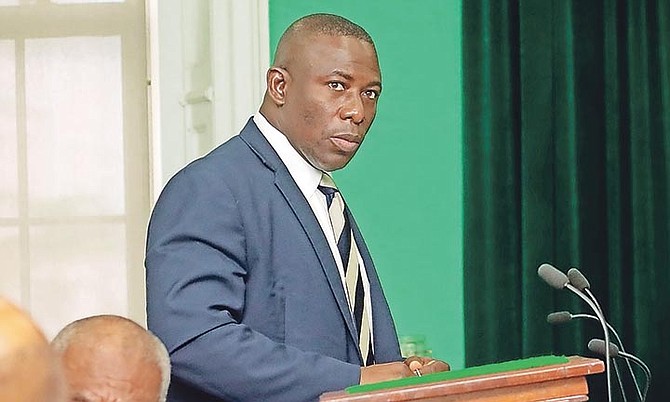 HEALTH Minister Renward Wells said yesterday he is not disappointed that the first doses of the COVID-19 vaccine have not yet arrived in the country.

The government was expected to receive its first doses of the Oxford-AstraZeneca vaccine late last week, with Mr Wells telling reporters at the time that administration of the jabs could begin “as early” this week.

However, the vaccines never arrived and it is still not clear when the first doses will be present in the country.

Asked for an update on the matter outside the House of Assembly yesterday, the minister replied: “We will update the public sometime this week, later on this week. There is no disappointment. The fact of the matter is I am so happy that y’all are concerned and elated and making sure that you keep the Bahamian people informed because when it does come, we do want all of the Bahamians (to take it).”

According to the health minister, the government will likely use the first batch all at once to vaccinate citizens, meaning that if 100,000 doses have been shipped to the country, 100,000 people will be able to be vaccinated.

“We have always talked about the 100,000 dosage which is about 50,000 doses if you give everyone two doses, but the dose is obviously spread over a period of eight to 12 weeks for AstraZeneca. That’s when they say it’s most effective,” he told reporters before going to Cabinet last Tuesday.

“So more than likely the government will vaccinate everyone first, give them their first shot of those who are wanting to be vaccinated. That could be up to 100,000 persons barring we don’t have any spillage and wastage. So, we’re looking in the first tranche to be able to do (it).”

According to officials, several vaccination sites have already been identified in New Providence, Grand Bahama and the Family Islands.

Among the first priority groups eligible to receive the COVID-19 vaccine on New Providence and Grand Bahama are healthcare workers; people over the age of 65; uniformed branch members; frontline workers; critical workers in high-risk settings and other essential service workers.

Meanwhile, on the Family Islands, residents there will be vaccinated at the same time and the schedule will not follow the prioritised group rollout as previously announced.

“However, the vaccines never arrived and it is still not clear when the first doses will be present in the country.“

But he’s not disappointed. Nobody knows where they are, or what happened, or when they will arrive, or who will get them, or how, or when, but ... hey, no biggie, right?

Wells only need monitor what’s going on with the vaccines. A huge black market is being created where persons and clinics are willing to pay hefty bucks for these vaccines. Some people are attempting to’trick’ the system by presenting fake ids. Others are going to different locations, even different parts of the state to ensure they get their two doses in a timely manner. But in India, where some of the vaccines are made, the opposite is true. Persons are afraid to take the vaccines so the program has hit a brick wall. The government has embarked on an education and information campaign to get more people to take the vaccine. And as the numbers continue to decline over the world, less people are willing to take the vaccines, at least anxiously. And with three pharmaceuticals now cranking out the vaccines (Johnson and Johnson has delivered their first 4 million doses) some expect there will be a glut of vaccines on the market by June. That’s when The Bahamas will get there’s. O and there’s also talks of fake vaccines been offered for sale. So you should know where your ‘jab’ comes from.

not disappointed, of course you are not disappointed. you wouldn't be a politician if you were. You guys know what to say and when to say it. You said by the end of last week. you must be disappointed in your comments , then.

Of course he is not disappointed, he knew this right form the start. But 50,000 Bahamians are.

This uncertainty also fuels the narrative that all politicians are nothing but nasty, arrogant, dirty liars who don't have the people's best interest at heart but will spool out untruths to appease the moment while actually don't know and deceive us all.

And meanwhile not a peep from Dr. Minnis about the doses of Communist China COVAX vaccines supposedly coming our way. After all, he's now much too busy masquerading as Robin Hood as he goes about dangling generous low cost land handouts in front of those whom he thinks he can dupe into voting for him, especially in his own Killarney constituency.

We are scheduled to receive the lowest ranked vaccine on the market, maybe. One must be concerned that if you take the first shot now,will the second dose arrive in time to comply with the 8-12 week time frame. His nonchalant approach does not instill confidence in any one.

Poor Renward Wells. It has taken him longer than most to wake up to the fact that our supreme ruler has thrown him under the bus. If God should unmercifully smite us with a second Minnis-led FNM administration, it's highly unlikely Renward would be given a signficant cabinet position. In fact, Minnis would probably point to Renward's dismal performance as minister of health as the basis for not giving him a cabinet position at all. LOL