ALICIA WALLACE: We need women in Parliament who can do real work. Rolle is not a loss – she was a liability 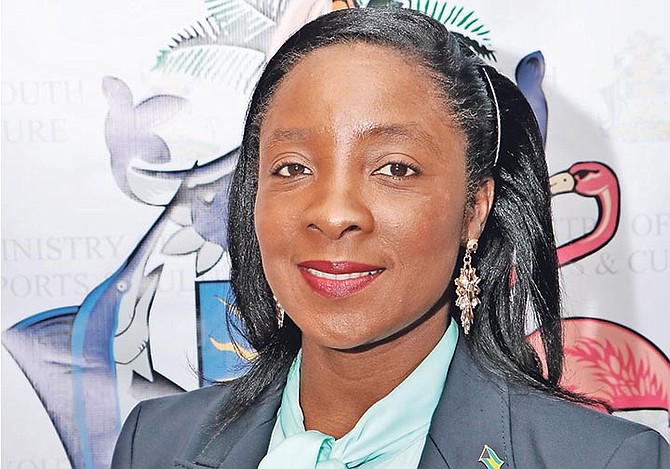 LANISHA ROLLE MP, who has resigned as the Minister of Sports, Youth and Culture.

International Women’s Day is next Monday, March 8. The theme set by UN Women is “Women in leadership: Achieving an equal future in a COVID-19 world.” This theme is meant to align with that of the upcoming 65th session of the United Nations Commission on the Status of Women (CSW)—“Women’s full and effective participation and decision-making in public life, as well as the elimination of violence, for achieving gender equality and the empowerment of all women and girls.” Both themes are important and need more than one to 12 days of discussion, analysis, and action planning. We can see that quite clearly in the national context, particularly as we are in the midst of election season.

Political parties continue to announce the ratification of candidates and are far from gender parity. Not even 30 percent of the slates are women. This is no surprise considering the fact the two major parties had four and six women on their slates of candidates. We currently have five women in Parliament — 12.8 percent. It stands to reason that if both political parties had more women as candidates, women would comprise a higher proportion of Parliament and we may have actually had better representation.

It is important that, even as we advocate for a political quota, we emphasise the need for quality candidates. We do not need more women in Parliament who will not only fail to represent women in all our diversity and work to address issues that directly and disproportionately affect us, but embarrass us repeatedly and help to set us back.

We do not need women who simply want to be a part of the “boys club” or want to set themselves apart by distancing themselves from women’s rights issues or “feminine” characteristics.

We do not need more people who simply want to occupy a seat. We need women who are well-equipped to represent their geographic constituencies and the larger constituency of women.

It has been particularly interesting to watch the hypocritical response to the resignation of Lanisha Rolle from the Ministry of Youth, Sports, and Culture. All of a sudden, people and organisations are concerned about the absence of women in Cabinet.

Over the past four years, very little was said about there being only one woman in Cabinet, and that one women being among the worst of Cabinet Ministers. Her earlier appointment to the Ministry of Social Services and Urban Development was cause for great concern. Those who were paying attention knew that it would not go well. Giving Rolle oversight of the ministry with departments responsible for serving people in need and meeting international obligations such as CEDAW made no sense. The Department of Gender and Family Affairs was suffocated by her refusal to recognise the necessity of its work. It was devastatingly stagnated, despite the work of some of the most dedicated, qualified staff - and it has yet to recover.

Rolle, when asked for her position on marital rape, said marital rape was a private matter. Are other forms of violence within the home also private matters? The personal is political. This is not just a saying. It is a truth we need to understand. The decisions we make as individuals and the structures of our relationships and institutions, including families and businesses, are directly impacted by and directly impact the economic and political spheres.

We can look at the state of households during the COVID-19 pandemic (though the same dynamics existed before this exacerbation). We continued to work, whether on-site or from home, and took on the additional work of supervising virtual learning and the tasks that could no longer be done by others due to restrictions. Most of the added labour fell to women who had to continue their regular work, help children with virtual learning, look after elderly family members and keep the house clean and prepare meals on a more frequent basis. Before this, women and men were working and, in most cases, women came home to the second shift, handling domestic tasks and care work. Some may say this is a personal matter.

The way people divide their household work is up to them, right? Well, how do they come to these decisions? Are they actual choices, made consciously, or predetermined due to circumstance or the (often unspoken) gender division of labour?

The way tasks are divided are home depend heavily on the ways women and men see themselves, not only on a personal level, but culturally, politically, religiously. If only one person in the household can work overtime in order to ensure household matters are dealt with, it is likely to be the person who is making the most money. This is directly impacted by the gender wage gap and the difference in opportunities available to and accessed by men and women.

A woman does not truly choose to spend less time on paid work and take care of the children if the issues are that no one else is available to do it and/or the man is able to make more money in less time. This “private matter” is affected by public issues of education, employment, and social security, among others.

Returning to the absurd idea that marital rape is a private matter, we have to look at the factors that affect and are affected by dynamics within the home. When we create this kind of divide between private and public, we leave people defenceless. Rolle’s comment communicated to the public that what happens to any woman at home is her own problem. The government is not concerned about such matters and sees no need to interfere.

Miriam Emmanuel, no better than Rolle, saw fit to share a disturbing anecdote about her father’s victim-blaming regarding intimate partner violence. Comments like these send the message that women are disposable, unprotected, and complicit in their own harm while men are excused or even revered for their brutality, creating the environment for violence in the home to proliferate. It is important to understand that the effects are not limited to the individual, but affect public health and the economy. Hospital visits and sick days do not affect just one person.

We need true representation for women in Parliament and Cabinet. We need women who are aware of the issues affecting women, care about about addressing them, and are prepared to do the work with minimal support. Rolle is not a loss. She was a liability the entire time she was a Cabinet Minister and remains a liability as a Member of Parliament.

This month, as we advocate for women to be in positions of political leadership, it is critical that we are clear in the demand for feminist leadership and true representation. We do not simply need women, but women who believe in equality. Women who understand and explicitly state that marital rape is rape. Women who advocate for comprehensive sexuality education in all schools. Women who have studied and have mastery of international mechanisms and declarations such as CEDAW and the Beijing Platform for Action and have fresh ideas and plans of action for legislative reform and implementation. Women who are engaged with civil society organisations that are engaging in women’s rights work.

Taking notice of the lack of gender parity now could be a sign of opportunism because it is election season or because it is a global priority. Better late than never when the latecomers are ready to go the whole way. Let us not lament the resignation of Rolle as though we have suffered some great loss. We have not. Focus the discontent on the actual tragedy — the continued lack of representation for women and all indications that the next term, no matter the administration, will be quite similar to this one. While all parties still have room on their slates, pressure them to ratify qualified women who believe in and will advocate for human rights. Pay attention to what The Bahamas says in international spaces. Hold the government to the commitments it makes. Call it to a higher standard.

We need women leaders who will represent all women from different walks of life.

This is the problem with so-called enlightened commenters like Wallace ........ She calls the serving women public figures "weak" while complaining about the "lack" of women in power.

Is she looking for Dame Doris Johnson or Janet Bostwick to be politically resurrected????????