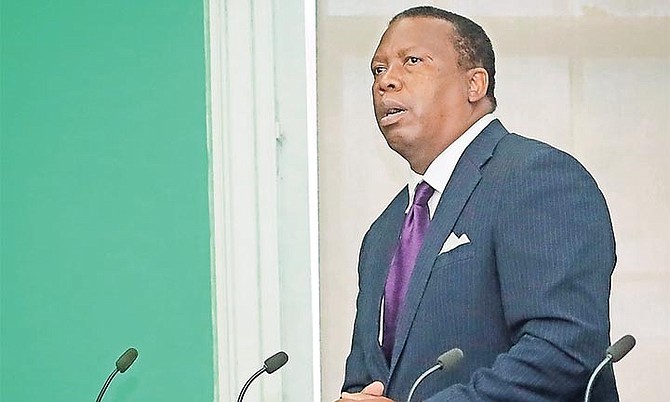 Mr Forbes said on Monday he will not seek re-election. He felt the leadership of the PLP did not robustly support his potential candidacy.

During the mid-year budget debate in the House of Assembly yesterday, Mr Johnson discussed recent PLP matters that have made headlines, starting with Mr Forbes’ surprise announcement.

“I do recall when this matter first came, I stood on this very same floor and I said to the member for Cat Island (Philip Davis) who is not here today strangely enough, I said this is a committed and loyal gentleman,” he said, referring to Mr Forbes.

“Whenever the attack was on Cat Island, he would jump to his feet. He would put himself in the way and block the fiery spears or darts that (were) heading toward Cat Island. I said to him right there, this is an honourable man, this is a faithful man, you can’t be going back and forth, what is the deal with him?

“And it wasn’t my business you know, because that’s my cousin and I love him too, but what is the deal? Be fair with him. And he said to me…’everything’s okay’ but we going into the community…going back and forth and to treat the member of Andros the way he was treated is unacceptable, you just don’t do these things.

“I said to my party, if you’re not going to run me, tell me you ain’ gon run me. We could have a discussion with the executive of Yamacraw and I could perhaps even walk with the fella who you sending in, but don’t let me go on the road for six, seven months, expend funds that I don’t have when I could be concentrating on rebuilding my firm. Tell me that now and then what I can do, just tell me and let me go.”

Mr Davis has publicly said the MPs who won their seats on the party’s ticket in 2017 were guaranteed a nomination.

He and a contingent of PLP leaders travelled to South Andros yesterday for meetings.

“Now he’s in South Andros when he’s done allowed it,” Mr Jonson said. “You should’ve come out and told the man.”

Mr Johnson also discussed comments Monique Pindling, the daughter of Sir Lynden Pindling, made on Tuesday. Ms Pindling said the PLP’s leadership told her they did not want a Pindling on the ticket.

He continued: “Somebody told me you got Sir Lynden daughter in one way and then you trying to hold back A D Hanna daughter. How you could do that?”

PLP officials say Glenys Hanna-Martin, the Englerston MP, is guaranteed a nomination. Unlike Mr Forbes, no strong hopeful has been soliciting support in her constituency.

“I’ve heard certain things said about (Mr Christie) but I don’t know that to be the man,” he said. “I know there are some allegations being made about Nygard Cay and I’ve called on them to say something about the women, but when I heard the thing about Mr Christie and about him exposing himself, I find it very difficult to believe it and I would give him the benefit of the doubt. And this is big man talking here now. But I would’ve expected that Cat Island would get up and say hey, at least it deserves an investigation to protect the office of this gentlemen and say what you like about him, he gave it his best shot.

“I just would like to warn all and sundry that South Andros deserves better, the legacy of Sir Lynden deserves better and like I said, say what you like, do what you like, Sir Lynden got all of us going his way and the Rt Hon. Perry Gladstone Christie at least deserves someone to stand and say, ‘listen I give him the benefit of the doubt, innocent until proven guilty, let’s say something to protect these women and children but have an investigation.’”

Mr Christie has said that he has “no fear of any investigation” into his conduct in public life concerning Nygard.

This same Johnson man who as they called it the spy bill was against. In fact, they campaigned on that, "The Judas" with the black shirts helped. Then stood on the house floor and had the audacity to pass the bill.passed.No creditability at all

Mr Christy would be a real fool to say anything about Mr: Nygard.. Which you all hope will somehow help you all to win an election.

The Average Bahamian is busy trying to meet ends meet. since you all 60% increase in VAT , increase in water and the list goes on..

We can only pray Elsworth ends up going the same way as Picewell after the next national general election.

No one is surprised by the PLP’s actions! There is no honor among thieves.

Both major parties have gotten rid of MPs. Remember Vernae Grant and Kendal Wright. Bahamians have short and selective memories.