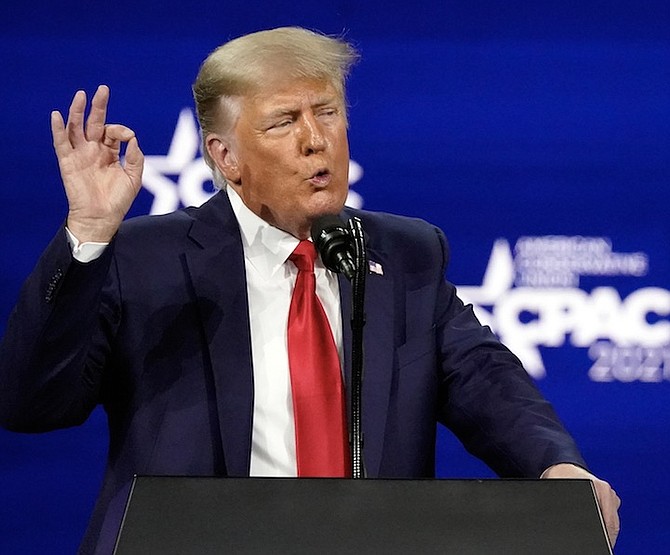 He got a haircut.

That was the first thing some spectators noticed when ex-President Donald Trump strode out on to the stage on Sunday at an Orlando Hyatt hotel to bask in the adulatory applause of the 1,400 faithful fans gathered at the 2021 Conservative Political Action Committee conference.

Not that he ever looked especially overwhelmed by the burdens of office while living in the White House, but Trump did look tanned and well-rested.

And just as smug and cocky as ever.

Shaking his head wearily, though, one observer of Trump’s 90-minute rally speech at CPAC said the whole experience left him “just incredibly tired. Somehow, hearing all the same smack talk and lies and exaggerations and venomous attacks on opponents left me as wrung out as a dishrag.”

“When Trump was still President, I guess you had to take him seriously, even if he rarely seemed to give any thought to what he was actually saying and often strayed off course to pursue grievances.

“Now, though, he’s out of office. It feels like I don’t have to pay him so much attention any more. What a relief.”

Finding Trump’s much-ballyhooed speech on television on a Sunday afternoon wasn’t particularly easy. The mainstream media that Trump so often and so virulently criticizes largely ignored his appearance.

ABC, CBS, NBC, CNN and Fox carried on with their normal sports, re-runs, movies or infomercial programming. CNN and MSNBC did “cover” Trump’s words, but focused more on other stories such as COVID-19 vaccination updates.

Fox News, One America Network and Newsmax all adoringly carried Trump’s every word, however. These three are supposedly vying for Trump’s favour and seem to be scrambling all over each other to catch his eye. They still offer no on-time fact checking of his prevarications, of which those keeping track said the total exceeded 30,000 lies during his four years as President.

After keeping his audience and his loyal news networks waiting for one hour before he appeared, Trump was played on to the stage with the Country and Western anthem “God Bless the USA.” He wore his customary navy-blue suit, white shirt and blood red necktie.

All of that notwithstanding, Trump did drop some news during his monologue. He revealed he and his supporters had no plans to form a breakaway party in advance of the 2022 or 2024 American elections.

“Why should we?” he asked the crowd. “The Republican Party is solidly behind us (me), and it is poised to take back the House and Senate next year and the White House two years later.

“I wonder,” Trump mused, “who will take back the White House for the Republican Party in 2024? Who might that be, hmmm?” he teased his audience of true believers.

That was the breaking news from an otherwise all too familiar address.

It’s just that you had to hunt for a TV network that was actually broadcasting it. No Facebook. No Twitter. No mainstream TV media.

53 largely quiet days after he incited a historic assault on the American Capitol, Trump might finally be starting a journey down the path to being forgotten - but not gone.

And that might just suit most of the nation.

Ordinarily, the only context in which Ted Cruz and Andrew Cuomo would be mentioned together would be an alphabetical directory of current American political celebrities.

These aren’t ordinary times. Both the Republican Texas senator and the Democratic New York governor have stepped into potholes they dug for themselves, and their likely fate speaks eloquently about the culture of the political movements they lead.

You may have heard about the deadly misery inflicted on Texans recently when the polar vortex punched a hole in the jet stream and sent an unusual and unexpected tsunami of cold air down through the middle of the United States.

It snowed in Houston. There were icicles on the Texas Gulf Coast. And the Texas power grid failed to deliver sufficient juice to keep thousands of Lone Star state residents from suffering and in some cases dying from the cold. This was all because conservative, tax avoidance Republican state regulators over a decade ago took the easy path and refused to commit the state to paying the financial or political price to join the national power grid.

The result was that people froze to death or died inhaling noxious gases from equipment pressed into service to stave off the cold but which was not designed for that purpose. A scandal ensued, snaring among others the state’s Republican governor, who initially blamed the whole mess, implausibly, on the Green New Deal.

Ted Cruz got caught too. In the midst of all the suffering in Texas, he and his investment banker wife Heidi and their two daughters took off for a sunny break at the Ritz Carlton in Cancun, Mexico, a place better known as a spring break magnet for college students.

Cruz was pictured on numerous cell phones passing through the Houston airport after Heidi had urged some of her wealthy neighbours to join them in the sun. “Rooms are only $309 per night,” she shared on social media.

Cruz, who virulently opposed Trump in the 2016 GOP primaries and was punished with the nickname “Lyin’ Ted,” now instantly became known as “Flyin’ Ted” or “Cancun Cruz.” The senator was compelled to admit that deciding to sneak off to the sun was “a mistake”.

Now Cruz is back in Washington spreading disinformation like marmalade. Cruz will continue to seek the support of the Trump wing of his party in the fight for the next GOP presidential nomination.

Almost universally disliked by his colleagues for personal rudeness and insensitivity, Cruz has few Senate fans. His colleague Lindsay Graham of South Carolina once said “if you killed Ted Cruz on the floor of the Senate and the trial was in the Senate, nobody would vote to convict you.”

Cruz will nonetheless probably survive. He isn’t up for re-election until 2024.

Then there is Andrew Cuomo. Son of a longtime New York governor and elder brother to the CNN 9pm weeknight news host, this Democratic scion was once married for 15 years to one of Bobby Kennedy’s daughters and was riding high as he became the face and voice of responsible government in the time of COVID-19.

In fact, Cuomo’s noontime press briefings as the coronavirus devastated the US became the exemplary counterpoint to the wilful ignorance and disinformation coming from the American President. Then, much more recently, things turned sour. First, it emerged Cuomo may have cooked the books on nursing home death totals to make his administration look better.

This week, at least three women have alleged that the governor behaved inappropriately toward them, and one plaintiff has video to back up her claim.

Cuomo is experiencing what such other once distinguished public figures as Bill Clinton, Bill Cosby and Al Franken have suffered as their alleged improprieties accumulated with stunning speed and volume.

Franken, the one-time comedian who turned out to be an effective politician and represented Minnesota in the Senate until his behaviour toward women undid his career, was tried and convicted of misogyny by an impromptu jury of his female Senate colleagues and was compelled to resign his seat.

One of those Senate Democratic women was New York’s Kristen Gillibrand. Now many observers are watching what she does in the coming days. If this bellwether feminist deserts Cuomo, so the story goes, he will be as doomed as Franken and might as well resign immediately.

So far, this is all Gillibrand has said: “The women who have come forward have shown tremendous courage and must be treated with respect and dignity. The behaviour described in these allegations against Gov. Cuomo is completely unacceptable.”

New York and the US has no shortage of powerful Democratic women. What might New York City congresswoman Alexandria Cortez-Ocasio have to say about Cuomo in the days to come? How about Trump nemesis Letitia James, the state’s Attorney General?

The governor, like his father, is a renowned fighter. But a world of trouble might await him.

Because the Democrats can publicly eat their own. The Republicans? Not so much. Georgia bigot and QAnon darling Marjorie Taylor Greene, after all, remains in her House seat this morning.

Right now all dems are praying the repugs run trump next election. Lol. Talk about a sure win....