Back In The Bahamas And Trying To Survive 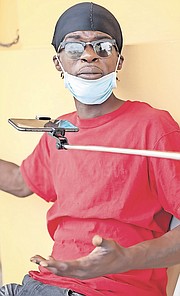 AFTER years of living abroad and a stint in prison, Steven Hunt is trying to survive in The Bahamas after being deported.

The 37-year-old said he left the country when he was two years old because both of his parents had died.

As a result, he was in foster care in America and raised by many people.

He had been living in the US for more than 30 years but was sent back to The Bahamas recently after spending 15 years in prison. Mr Hunt said he did not even know he was Bahamian for a long time.

The deportee has been in Nassau for a year and a half. Being deported was a “first introduction” to the country and he admitted it’s been a “culture shock”.

“When I first came, I had nowhere to go,” he told The Tribune. “I ain’t got no family.”

“It’s just me and then I have to acclimate myself to the culture. . .This culture is very foreign to me because I haven’t been over here in over 30 something years and never tagged on to the culture while I was here.

Workers at the Department of Social Services have been the only people assisting him since his deportation.

The Tribune met him yesterday outside of the Department of Social Services’ office on Baillou Hill Road where he was seeking rental assistance.

Mr Hunt said he has not worked for a while and just came out of the hospital as he was attacked last September.

He added: “Having no family, there are no close resources so you have to use places like this, you know. That’s about the hardest thing... knowing there is no help but relying on somebody else for assistance.

“I’m an electrician and plumber by trade, but right now we do contracts and things are tough. So I haven’t been working since January and I was doing light work because I just came out of the hospital.”

Mr Hunt said he gets government assistance, but lamented the “tedious” process.

He explained: “Me personally, I get the help because I’m not afraid to ask. I ain’t afraid to bother anybody because if you need it –- it’s worth fighting for.

“I would say it’s tedious to receive the assistance you need but anything worth having is worth fighting for.

“Sometime this place be filled up (with) 60 people and 10-15 of them, let’s say, will get the assistance they need; these 10-15 people may have been the most persistent.”

Mr Hunt is one of many criminal deportees who return home each year.

A report released by the US Department of Homeland Security in 2019 noted that 861 Bahamians with criminal records were deported from the United States between 2008 and 2017.

The government isn't doing anything on trying to improve the system, only trying to bring down the opposite party so they can fruad us again. Why are they worried about other projects. Ppl need jobs to survive right now.

We don't need fraudy projects, we need jobs to survive during these times. Barely ppl get help from their constituency leaders, stop the crap and just provide jobs.

Give this dude a ticket to Mexico and let him illegally enter the US with the Central Americans, the US has open borders under Biden and the Democrats, they won't ask him a single question and will give him free money.