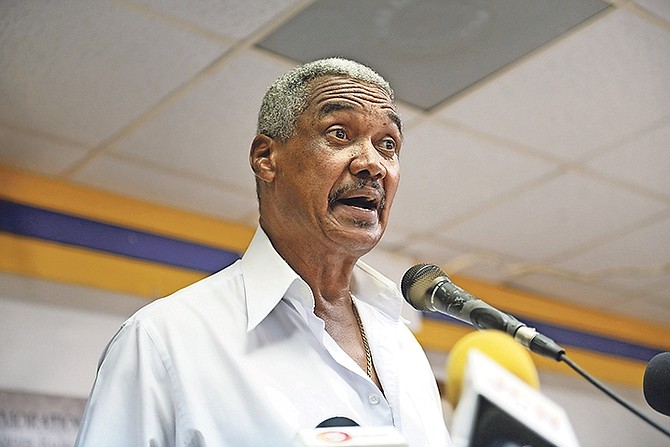 FORMER Tall Pines MP Leslie Miller would not reveal yesterday if he still plans to run as an independent candidate after being snubbed for a nomination by the Progressive Liberal Party. However, he expressed his desire to still help the Bahamian people and work with those who seek out his assistance.

Meanwhile the party’s Tall Pines candidate Dr Michael Darville said there is “no bad blood” between the two of them and called Mr Miller his “personal friend”.

When asked yesterday if he will do anything that is necessary to help the PLP win the next election, Mr Miller answered: “No doubt about it. I will do all in my power to see that there’s some positive change taking place in this country to enable our people who are (catching) so much hell today to advance themselves to get a better life. I’ll put my life on the line for that (cause).

“…..Under the PLP, I’ll put my life on the line for that (cause). . .That people of this country are given a break, that they’re given a refuge from what they’re under now. I don’t know if y’all know what’s going on but as I went door to door in my constituency – the pain and suffering that our people are going through. It is so significant…it is so harmful to their welfare.”

Still, he would not say if he plans to run for office as an independent, something he had previously threatened to do if he was not selected by the PLP.

“You will be the first one I will tell. I promise you that,” he said yesterday.

Asked if the party has assured him that if the PLP wins the election officials will use his experience to their benefit in some way, Mr Miller said “not to my knowledge.”

He added: “Maybe you may tell me. You may know more than I know.”

Mr Miller said he has been working with Leslia Brice – his daughter and the party’s candidate in Seabreeze.

“I am working with her - doing an excellent job up here. Just finished cleaning up every single lot in addition to that just cleaned the whole perimeter of 50 percent of the place called Seabreeze…. I’ll work with anybody who would approach me to work with them.”

Last week Senator Dr Michael Darville was ratified as the PLP’s candidate for Tall Pines. He was expected to be selected as he had been campaigning in the area for some time. Speaking to reporters on the sidelines of an event, Dr Darville said while the race for the nomination was “aggressive”, he is sure Mr Miller will work with him to advance the PLP’s agenda.

“We were in a very very aggressive race and during that particular race things would be said but at the end of the day Mr Miller is a PLP like myself who’s engrafted in the philosophy of the party, understands very well the democratic process, and I’m very confident in short order we will join forces and he will work very closely with me to ensure that I become the next member of Parliament for Tall Pines.”

Dr Darville added: “Me and Mr Miller have been in communication for some time. My ratification process was only a matter of I think days or probably two weeks now. Now that I’m ratified the discussion between me and Mr Miller is ongoing.

“I would allow Mr Miller when he’s ready to speak directly to the media as to where we are with those, but from those discussions I feel very confident that me and him can work together in the best interest of the residents of Tall Pines and to be able to have that camaraderie as PLPs to ensure that the Progressive Liberal Party not only wins the Tall Pine constituency but form the next government of the Commonwealth of The Bahamas. I believe that he is that type of individual who is engrafted deeply in our party and will make a strong contribution to the country by way of the Progressive Liberal Party when we win the next general election.”

Well, really, was it the expectation of Tribune's reporter EarYel, be picturing readers to truly be staring directly at the article's picture of Comrade Pot cake Leslie. and seeing em's as being anything even remotely capable of being tight-lipped over, or about anything?

Leslie Miller needs to stay focused on his beloved Haitians! Bahamians gave up on him long time ago!

Are there any truthful leaders out there...👀😒

Good riddance. He's too conflicted with massive amounts of debt he's supposedly defaulting to the bank owned by the Bahamian people. If he can clear his debts, maybe he can be trusted to not be self-interested.