Insight: We Must Proceed With Caution - Now’S Not The Time To Shoot Ourselves In The Foot 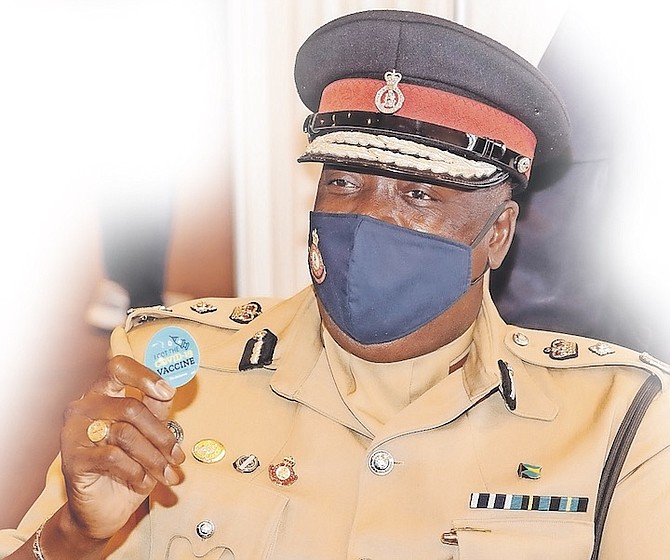 JUST a few weeks into the first jabs going into the arms of Bahamians, reports of increased cases of COVID-19 since January have shown the urgency for citizens to get vaccinated.

In the United States, the race to vaccinate amid the spread of more contagious variants has been under way since the start of the year. Even with 14 percent – more than 47 million - of its population having been fully vaccinated, health experts are still signalling caution after multiple states have experienced hikes in cases.

As restrictions have eased and people have become more comfortable, a dangerous game is being played.

Just next door to the US, top health experts in Canada are warning citizens there could be a seven figure rise in cases by next month unless both prevention and vaccinations occur quickly. Likewise, in Europe, increased cases in Poland, France and Italy have been unsettling with vaccine lagging in countries battling resurgences of the virus.

With the global competition for vaccines intensifying, governments are naturally relying on their citizens to discipline themselves.

Are you willing to take the Oxford-AstraZeneca COVID-19 vaccine?

Here at home, the first of PAHO’s 100,000 doses of AstraZeneca will arrive in early April, a little longer than we thought.

As election season continues to heat up, campaign events are leading to gatherings that have the potential to become spreader events. While data has not shown a connection so far, there is a concern to see campaign activity increasing at the same time as the increase in COVID-19 cases since January.

We initially did not know how different campaign season this year would be, but with both the FNM and PLP taking the liberty to hold events where attendees aren’t necessarily following the established protocols, we are playing with fire. Furthermore, the parties themselves should be questioned if these actions are responsible with the light at the end of the tunnel in sight.

Anticipating better days ahead, Health Minister Renward Wells stated his confidence we will achieve herd immunity by summer’s arrival once there is successful distribution of the vaccine to our population. Sharing his sentiments with reporters outside Cabinet, Wells said the combination of Bahamians already exposed to the virus along with those receiving vaccinations mean greener pastures in our immediate future.

“Along with our vaccination programme, I do believe that by the time we enter the summer, that The Bahamas would have entered and we would’ve reached our desired herd immunity which means that the country will be able to move in a more positive direction,” said Wells.

If his prediction is sound, however, it begs the question if the campaign activity we’re seeing could not be postponed a few months?

A perfect example of the danger we face exists in the US, which is getting its 600 million doses to its people at a much facer pace.

Nonetheless, the trifecta of the quick trigger ease of restrictions by governors, the threat of more contagious and deadlier variants, and the challenge of vaccinating millions is something our government should be taking note of.

According to data published by Johns Hopkins University, cases of COVID-19 in 15 states in the US saw a 10 percent jump from early to mid-March. Top infectious disease expert Dr Anthony Fauci expressed his concern to the US Senate’s Health committee about a fourth wave.

Making his case to US lawmakers, he said: “I’m concerned that if we pull back in our enthusiasm for the fact that vaccines are rolling out, and things look good, if we pull back prematurely, we may trigger another surge. And that would really set us back in all the things that we’re trying to do.

“Europe is generally about three to four weeks ahead of us in the dynamics of their outbreak. And what they saw a little while ago was a plateauing of their decrement. They were coming down nicely, and then they plateaued. And then, just as you might have predicted, they then, one, started to go up.”

With spikes in Europe creating anxiety, we hope our leaders haven’t gotten too comfortable for the sake of election season.

While it may be tempting to galvanise political support, if we are as close as the Prime Minister says to being back to normal, then a word to the wise is sufficient.

Proceed with caution. Shooting ourselves in the foot at this stage is foolhardy.

We’ve not performed as well as we have against the virus without significant cost to our people. Strict lockdown measures under the emergency powers saw the closure of businesses, families with breadwinners becoming unemployed, marriages struggle due to stress, and most importantly, lives lost.

We understand how important this time is to political factions. However, we have no control over what is going on around us and therefore must do what we can to ensure that we can progress safely to the other side of what has been our most challenging period as a country.

Clueless, anticipating better days ahead, Thee Renward is an understatement. Well, right. But if it wasn't an attempt at satire, it's the first-degree deception.

So ridiculous. I wonder how many cases of diabetes, high blood pressure and obesity were registered this week, this month, this year, last year..