Peter Young: A Giant Cargo Ship Isn’T The First To Find Trouble In The Suez 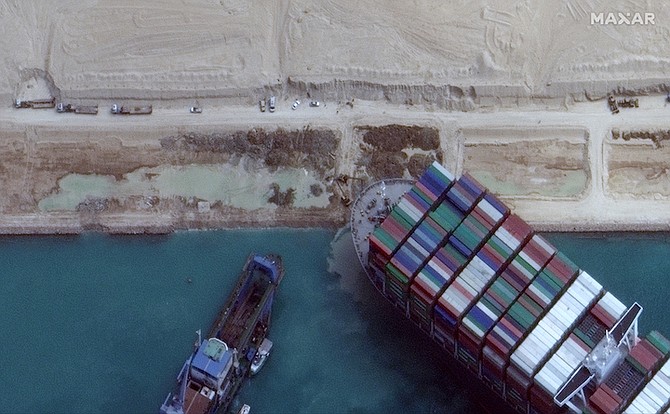 The extended images over the past days of a giant container ship run aground in the Suez Canal has captured international attention amid disbelief that such a thing could happen. But this new focus on the most important shipping lane in the world will also be a reminder that mention of the word ‘Suez’ means to historians, in the first instance, the crisis of 1956 when Britain, France and Israel conspired to invade Egypt following its nationalisation of the canal.

For the past week, the Japanese-owned and Panama-flagged 200,000-ton and 1,300-foot-long vessel, Ever Given, which is carrying hundreds of containers, has been blocking one of the world’s busiest waterways that is the shortest link between Asia and Europe. About 50 vessels pass through the canal daily with some 12 percent of global trade traffic. At the time of writing, there is news that the vessel has been successfully pulled free and is slowly being towed through the canal.

To the man in the street, the navigational hazard of taking one of the largest container ships in the world through the Suez Canal looks to be daunting. The owners claim it was blown off course by high winds and became wedged across the canal. But what is hard to realize is the extent of the knock-on effect of the log jam of hundreds of other ships now stuck at both ends of the waterway and the delays created.

This has been sufficiently serious for commentators to describe the blockage as a ‘major macroeconomic shock for Europe’ as some international trade could come to a standstill. The delays will have disrupted global supply chains for everything from oil and grain to cars and a range of manufactured goods. Reportedly, suppliers and manufacturers rely on ‘just-in-time’ deliveries in order to avoid stock piling parts, so finely-tuned supply chains have been affected by the delays as have scheduled manufacturing lines. If the blockage had been prolonged, carriers would have been forced to divert vessels around the Cape of Good Hope despite extra costs and fresh delays.

In the midst of all this, some people may be unaware of the history of the Suez Canal as a symbol of Egyptian sovereignty and nationalism as well as being a major source of revenue and foreign currency. In 1956, a crisis developed with the Anglo-French invasion in reaction to Egyptian President Gamal Abdel Nasser’s nationalisation of the canal which up to then had been largely controlled by Britain and France. He claimed to have done this in order to charge tolls to pay for the construction of the Aswan Dam on the River Nile; and historians generally agree that the Suez crisis - also known as the Second Arab-Israeli war - was precipitated in part by America’s and Britain’s earlier decision not to finance this.

In describing the crisis in his memoirs, former Prime Minister Harold Macmillan wrote that rarely in Britain’s affairs did disputes arise that were so fundamental that they produced serious rifts and divisions within the nation. But two examples have been the appeasement policies of Neville Chamberlain in the 1930s and the Suez conflict.

What caused so much controversy over Suez was that it became known that Britain and France had been plotting military action to regain control of the canal and, if possible, to depose Nasser.

They had secretly connived with Israel which attacked Sinai, giving Anglo-French forces a pretext to bomb Egyptian bases and to attack Port Said on the dubious grounds that they were separating the combatants (Israel and Egypt).

The US, whom Britain had failed to consult in advance, strongly opposed this action - apparently on the grounds that it was an unjustified post-colonial show of force - and even teamed up with the USSR to lead international condemnation and a demand for a ceasefire and immediate withdrawal of all the forces engaged.

The result was that within weeks Britain and France had no option but to withdraw. Amid accusations of collusion and the misuse of military power in attacking Egypt, the British Prime Minister, Anthony Eden, was forced to resign and there was a serious breach in Anglo-American relations.

In Britain itself, many considered the attack had been an illegitimate use of force, not least because of the duplicity of the Eden government in secretly plotting with France and Israel. But others saw it as the right response to Egypt’s hostile action in nationalising the canal with support from the Soviet Union which was increasing its influence in the Middle East. In his retirement from public life, Winston Churchill issued at the time a statement of support for the invasion but later declared it to have been ‘ill-conceived and ill-executed’ and that the Americans should have been consulted. As it was, Eden had profoundly underestimated the strength of US opposition.

Having written last week about the coronavirus vaccines, I hesitate to return to the subject today. But the rollout of a vaccination programme is such an important issue that I think it is worth drawing attention again to the success of the programme so far here in The Bahamas.

From all I hear - and, as I mentioned last time, from personal experience of receiving the first dose - the rollout has been well organised by the Ministry of Health with the assistance and effective participation of Rotary and is being carried out with impressive efficiency.

After an unnecessarily slow start in procuring vaccines, The Bahamas is bound to be behind some other countries in the region in organising its own programme. But clearly there has been good progress already and everybody must hope the momentum will build up as the programme continues in the coming weeks.

I reported last time about the similar success of the vaccine rollout in Britain. Having begun there in early December, there has been good progress and the latest figures show that 30 million have received a first dose.

Even though there is a long way to go in vaccinating as many people as are willing to take the vaccine here in The Bahamas - and there has been a worrying increase of COVID-19 cases in the past week - it might nonetheless be interesting to look at Prime Minister Boris Johnson’s most recent pronouncements about plans for easing COVID-19 restrictions in case there are any lessons to be learnt from experience there which we might be able to use here at home.

He said at the weekend that he could see nothing in the latest data to dissuade him from continuing along the route of the government’s so-called ‘road map’ in an effort to remove all local limits on social contact and unlock the UK economy. The official guidance is COVID-19 remains a serious threat across the country and social distancing measures should remain in force as necessary. One in three people who have the virus have no symptoms so there is a danger of their spreading it unwittingly. But new data shows vaccines have prevented thousands of deaths in older adults.

Generally, restrictions are easing across the UK. But the government’s strong advice is everyone should remain vigilant in case of a new spiral, though the difference this time is that any rise should - in the Prime Minister’s own words - be “sufficiently mitigated” by the successful vaccine rollout. Nonetheless, with the emergence of new strains and more cases in other countries like Germany, the legal curbs on non-essential travel will remain so that people will not be allowed to leave the UK without a valid reason.

On present plans, there should be no more restrictions in Britain after June 21 when all legal limits on social contact will be removed. Meanwhile, schools were reopened on March 8, and yesterday the stay-at-home rules were ended so that people can meet outside and outdoor sports facilities can be reopened – and this is now being called the ‘first day of freedom’!

On April 12, non-essential retailers will be allowed to reopen - as will, for example, libraries and museums, gyms and spas. Furthermore, pubs and restaurants will be permitted to open out-of- doors and then, by May 17, indoors as well when theatres and cinemas can also reopen. The government has said, however, that all of this will depend on the vaccination programme going according to plan and infection rates remaining low.

Perhaps this last condition about the rollout of vaccines is the key one for us here in The Bahamas as well. So the next few weeks of the vaccination programme will be critical, with the speed of the rollout a major factor. We surely ought to bear in mind, too, that evidence of having been vaccinated will almost certainly be required for those who wish to travel outside the country.

Pride restored in the southern seas

A quarter of a century after the Suez disaster, another British military adventure - but one which ended in triumph - was the successful campaign directed by a Conservative government led by Prime Minister Margaret Thatcher to retake the Falkland Islands after Argentina invaded and occupied them on April 2, 1982. These remote islands, with a population of under 3,000, had been administered by Britain for some 150 years.

On the anniversary this week of these momentous events, it might be interesting to take a brief look at what happened in a conflict which for many is now long forgotten.

Britain reacted forcefully to the attack on its sovereign territory. The Islanders were fiercely opposed to any Argentine interference in their lives, but bilateral talks with Argentina about the future of the Falklands were taking place, and this made the invasion all the more unexpected. A naval task force was quickly sent and British armed forces landed on the islands on May 21.

After fierce fighting, the Argentines surrendered on June 14. But the price paid was high in terms of casualties. During a conflict lasting seventy-four days, six British warships were sunk, 255 British and 649 Argentine military personnel were killed and many on both sides were wounded. Among numbers of Argentine aircraft and ships lost, the cruiser, the General Belgrano, was sunk, with heavy loss of life, by a British nuclear-powered submarine. Three Islanders also died during the hostilities.

Despite Argentina’s long-standing claim to what it calls the Malvinas - situated some 320 miles from its southern coast - as I understand it, the British government remains clear about the status of the Falklands as a legitimate overseas territory.

I am, of course, not privy to current policy in London, but I am certain Britain continues to support the principle of self-determination contained in the United Nations Charter and accepts its obligation to respect and protect the interests of the Islanders, who, in a referendum in 2013, voted by an overwhelming majority (99.8 per cent) to maintain the status quo and remain under British rule.

Working in the then Foreign and Commonwealth Office on policy in relation to the reconstruction and redevelopment of the Falklands after the conflict, I was fortunate to have been able to make a familiarisation visit there in 1986. It was a fascinating but sobering experience which left a sense of pride that one’s own country was prepared to stand up to international aggression in the way it did in order to protect so few.

The government in Buenos Aires has made it clear that its claim to the Falklands remains as strong as ever, though it seeks to pursue this by peaceful means. However, there can be no certainty that force will not be tried again. But, if there were another invasion, it is now reported that, with continuing cuts in UK defence spending, there are doubts whether it would be possible to take back the Islands once more.

Great history. I love history. There is a quote. I hope I have it correct.

"If man could learn from history what lessons it would teach"

History is always a part f the future.