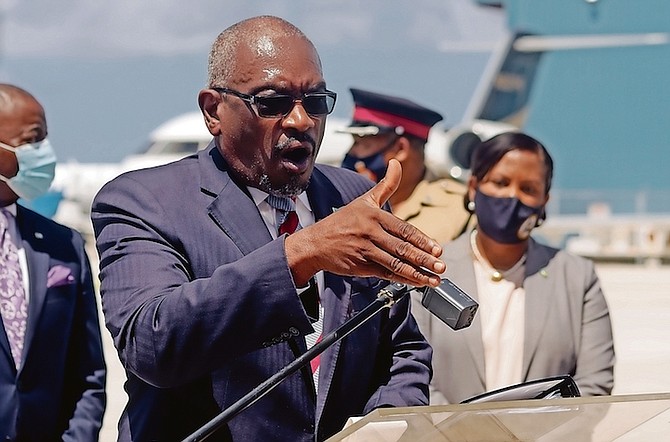 PRIME Minister Dr Hubert Minnis urged people to avoid large gatherings this holiday weekend, saying not doing so could set the country back as health officials warn of a possible third wave of COVID-19.

Asked about a possible third wave on Grand Bahama, Dr Minnis said this could be averted if there is effective contact tracing, isolation exercises and accelerated vaccinations on that island.

He spoke on the matter after 33,600 doses of the AstraZeneca vaccine arrived in the country yesterday and after Dr Nikkiah Forbes, a local infectious disease expert, said Grand Bahama appears to be in the early stages of a third wave of a COVID-19 outbreak.

Dr Minnis did not rule out introducing new restrictions for that island but said health officials will analyse data they collect and advise him on what to do.

“I think we have a very efficient and effective medical staff assisted by our PAHO representative and they have monitored the situation and both I and they are convinced that once we aggressively continue our contract tracing, aggressively isolate those who are infected and aggressively vaccinate the population as much as possible, I think we can avert that,” he said.

Some observers have questioned if the government will enforce stricter measures on Grand Bahama, New Providence and other islands in view of the spike in cases.

Asked about this in relation to Grand Bahama, Dr Minnis said: “Your other question was whether I would introduce any curfews, any stringent measures, I am advised by the health professionals and they would do their data collection, they will do their analysis and they are guided by the science and they would advise me as to the way forward. What I can tell you at this point in time, this is Easter and Bahamians love beaches.

“We do not want to discourage (people) from going on the beach but I would encourage them to avoid the large mass gatherings that I’ve seen just recently and I’ve seen in the press, as that simple gathering can cause our entire country and economy to go into a tailspin and backward from whence we came, especially at a time that we’re now growing, and I would advise that for those that are in groupings, allow that group to be only household members, family members, do not allow strangers or those who you don’t know within that grouping.”

During his address, Dr Minnis noted that Grand Bahama and Eleuthera have seen an increase in cases.

“At this time, health officials are managing outbreaks in Eleuthera and Grand Bahama,” he said. “The vaccination programme will be accelerated to address the increase in cases.”

“Easter weekend is traditionally a time of family gatherings and fellowship, including beach picnics. But we are still in the midst of the pandemic. These are not normal times. The COVID-19 case numbers in the Bahamas and around the world make it clear that the pandemic is not over,” he said.

He noted that groups at beaches and parks are, by law, still limited to five on New Providence and Grand Bahama.

“Large gatherings over this weekend could set the country back,” he said. “If we continue to exercise discipline for a little longer we will reap the benefits.”

Dr Minnis was asked to respond to critics who note that his call for small gatherings and groupings come as political groups continue to congregate and campaign.

Despite his comments, people campaigning with political parties have not always strictly adhered to COVID-19 protocols.

Some people at both Free National Movement and Progressive Liberal Party events have clearly congregated less than six feet apart.

During a PLP ratification event this month, hundreds assembled and were at times tightly bunched together with many not wearing masks.

Minnis is not gonna shutdown anyone or anything anymore because he's afraid the people will physically remove him from his chair in the PM's office and seat Davis in it. Minnis now knows there's only so much of a beating his lowly plebes can withstand and tolerate from him. But he will nevertheless huff and puff as he threatens to blow us and our economy down for the umpteenth time.

Bus loads of tourist on tours, not ONE wearing masks, and not one word from anyone on that!

Get ready for a spike after Easter weekend.

However, isn't it interesting that this new wave of spikes came after these political, FNM, DNA, and PLP have all been our in large groups campaigning? Shows all these politicans are just a joke.

In other words ‘stay home whilst we out there.. campaigning, yea ya c

You can just imagine Minnis's FNM foot soldiers campaigning door-to-door in neighbourhoods during which time they become infected with the virus and spread it to many other households. But then again he probably wanted to hold on to his political power by declaring the next national general election to be a high risk super-spreader event that must be cancelled.

Reading the report presented to WHO, it says the virus was NOT from the lab but transmitted to humans from bars who got it from an unidentified second animal. We now can conclude that second animal was the Easter Bunny.

You will see the spike that comes after Easter. Remember they can say however many cases came as they want to say. They are already starting a big media campaign in the USA claiming rising cases ... just in time to scare people now that the virus is more widely available. What a coincidence in timing.

Lol.....Braindead sheeple are ignorant enough to totally ignore the fact that the reported "uptick in cases" just happens to coincide with the availability of the vaccine.

Exactly. I mean it is just so incredibly incredibly unbelievable. If you wrote a movie like this 3 years ago, nobody would come after the first night because the rumor would spread after the first night that it was a silly unbelievable movie - where people just did any stupid thing they were told and believed anything they were told. Nobody would think such a movie made sense. But here on the planet Earth - it is a box office smash.

Perhaps the Prime Minister can lead by example. Campaigning in large numbers, no social distancing in most instances, some not wearing masks, shaking hands, hugging, etc. Nothing but a clown show.

Stop messing up the elections plans of the PM or you will get a lockdown for Easter.

Excellent advise, does this include the politicians and their entourage that roam the neighborhoods asking for votes? How about the beach goers? Are they exempt as long as they wear masks and social distancing?

According to our politicians campaigning for public office is fine as long as you were a mask. All other activities could be extremely dangerous for the public health. Do not forget that all decisions are based on the advise of health experts and scientific evidence.

Thee tongue spitting Mr. Minnis and colleagues are not much anxious to be drawing focus inward at those about whom amongst PopoulacesPrivilegedAlternatives, are frequently witnessed being chauffered and flown about the realm, whilst committing social distancing misbehaving acts.
Yes, they're from another planet but which planet, expelled this bunch?

Regardless of which party wins the election, Minnis will most likely retain his seat. And there’s a lot of pre-election work going on in his constituency. He has constituents from the very rich to the very poor. And whilst his popularity may have diminished somewhat because of the lockdowns and curfews during they corona pandemic, he is still popular and favored in his entire constituency. Unlike many other politicians who cannot even walk to two or three houses in their area without getting cussed out or even chased away. Aggressively!

Y’all know if he wasn’t campaigning we would’ve been on lockdown this blessed Easter Weekend. Speak the truth and shame the devil! 😂😂