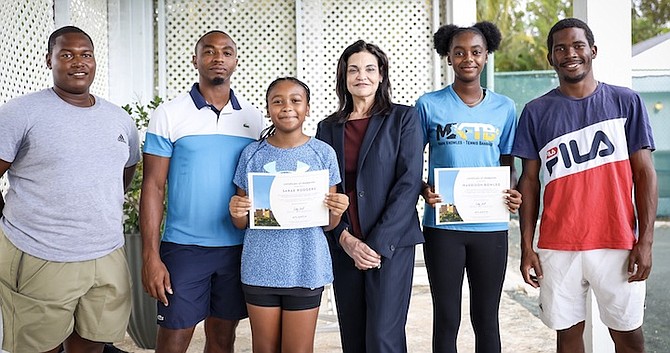 Sarae Rodgers and Maddison Bowleg, rising young players out of the Mark Knowles Tennis Bahamas programme, were rewarded by Atlantis Resorts yesterday for their victory and runner-up position at two separate (USTA) tournaments in Florida and Virginia respectively last month.

In front of their peers, coaches and parents at the Atlantis Tennis Courts where the MKTB programme is based, Audrey Oswell, president and managing director of Atlantis, presented the two players each with a three days, two nights weekend stay at the mega resort on Paradise Island.

Oswell noted that it was Atlantis’ way of saying thank you to the two players for being a part of the Atlantis family as players in the MKTB programme. Both players expressed their gratitude in receiving the gift certicates.

Not having the opportunity to play on the international scene as much as she would have liked, Sarae Rodgers said it was good for her to go to the Pumpkin Bowl in Wellington, Florida and come out victorious in the 10-and-under division of the level seven tournament.

A four-year player in the sport and a member of the MKTB since it began at Atlantis two years ago, Rodgers said while she’s pretty good at playing in tournaments, she hasn’t had that chance to play overseas, so she was ecstatic about her victory. “It was a very good experience. I got to play against people around my level and they’re really good but I won over them,” said Rodgers, a 10-year- old sixth grader at Summit Academy.

“Being a part of this camp here at Atlantis has really helped me to improve my game.”

For Maddison Bowleg, it was just her second USTA tournament, but she was delighted to get a feel for the competition, playing in the cold weather at the Hidden Creek Country Club in Reston, Virginia. She nished as the run- ner-up in the level six tournament. The 15-year- old Bowleg, who has been playing tennis for the past six years, said it was a good experience playing against different types of players.

Having only joined the MLTB six months ago, the Aquinas College 11th grader said she has grown so much at the facility.

Kevin ‘KJ’ Major, one of the coaches of the MKTB programme, said he’s worked with Mad- dison since she joined the programme and he’s pleased to see her growth and development in such a short time.

“She listens well, she fol- lows instructions and she’s very coachable,” he stated.

“So these are things that got her in the position that she is in today,” stated Major.

As for Sarae, Major said it’s “easy to coach her because she looks up to them as coaches for guidance.”

He said they just lay out the golden rules for her and the other players and now they’re seeing the fruits of their labour.

Philip Major Jr, another coach in the MKTB programme, said he was delighted in the perfor- mance of the players. “They put in a lot of work

so I knew they were ready to compete,” he said.

“It was just a matter of what the result would be, so I’m happy for them. They came out on top which was great and it makes them hungrier to do it again.

“So hopefully they can continue the momentum. We want to have more kids involved in the developmental programme, just giving them something that our generation didn’t have. So to be there for them as coaches, it’s a great feeling that they are being molded to be great Bahamians and tennis players, either to go on as a collegiate or profes- sional player.”

Oswell said when they were approached by the group to bring the pro- gramme to their facilities, they welcomed the idea because the courts were not being used at the time.

“I didn’t know what to expect, so I came over a couple times to watch and of course the coaches were fantastic,” Oswell said.

“Young children of all ages play tennis. It’s amazing how good some of them are and how promising they are. They put so much into it.

“They are dedicated to it, they show up every day, even when they are back in school now, they come after school and they come and practice and so it just warms my heart to know that we can be a part of it and it does not cost us anything to provide the tennis courts for them and to really give them that opportunity to practice on the courts and improve their skills.”

Oswell said it was so encouraging to see the players’ success at the tour- naments they played in and she’s looking forward to hearing about more success from them and the other players in the future.