PM tells COP26: Do what is needed, not what you can get away with 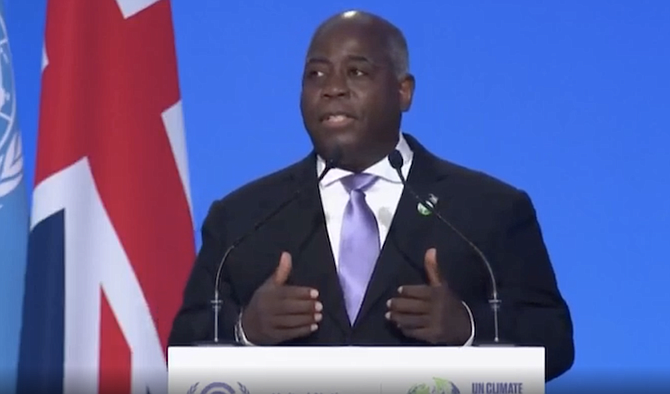 He said The Bahamas is among one of the top ten most vulnerable island nations in the world due to climate change but is not the cause of the crisis.

He called on world leaders to take specific action and make concrete policy changes to tackle the issue.

“Do what is needed, not what you can get away with,” Mr Davis said during a speech at COP26's World Leaders Summit.

• The updated version of this story can be found HERE.

Glad that he wore a purple tie. I wish he would send a message to his supporters to stop brandishing PLP flags and paraphenalia. We cannot move this country forward with partisanship

Meanwhile he's doing any and everything that he reckons we, the dumbed-down Bahamian people, will let him get away with. LOL

I hope he takes his own advice. Then maybe we can break this cycle of corruption.

Trying to make The Bahamas credit billion dollar windmills to stop oil production and use has Europe in trouble now as tinkering with nature calls for power beyond rich elites playground with marbles. There is money to make from electric lithium powered cars as they save the earth from CO2. Just that after 4 years you will need a $5,000.00 battery. Now there is research ongoing that concerns fires on board. Nothing is free neither the climate profiteers advise. Beware of used hybrid cars as gasoline is proven.

The "Brave One" borrowed some backbone from the Barbados PM ..... He will be reminded of these words by Bahamians when his Cabinet go rogue. What he says abroad will be used against him at home. If he is just looking for COP27 "handouts" from the rich countries to "fix" our climate change challenges, he may have long to wait.

We better start building our homes at least 30 feet above sea level to survive beyond 2050.

I am bamboozled by the disaster preparedness & environment agencies huge budget cuts in constrast of such a great speech concern of climate change. I'm unpinned.