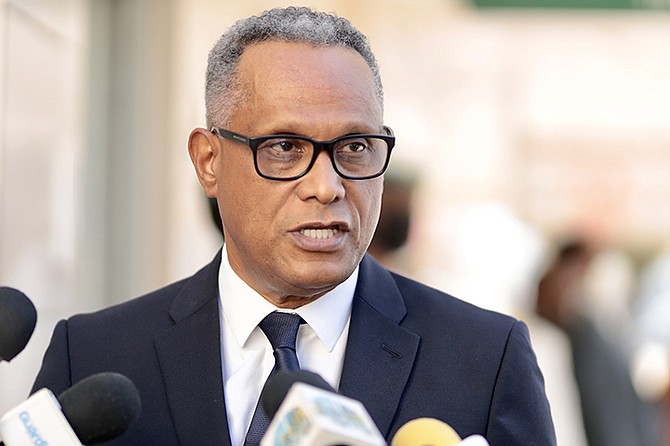 The minister would not commit to a timeline yesterday for the restart of in-person learning, telling The Tribune assessments of both schools and clinics are ongoing.

However, he said there were protocols officials intend to use to guide the resumption of face-to-face instruction whenever it should occur.

Last week, the United States Food and Drug Administration authorised the emergency use of the Pfizer-BioNTech COVID-19 vaccine to include children five through 11 years of age.

That authorisation was on the basis of an FDA in-depth and transparent evaluation of the data which included the views of independent advisory committee experts who overwhelmingly voted in favour of making the vaccine available to children in this age group.

“We just got the tranche of the 134,000 (doses) from the United States and we are hoping that the next tranche they may consider us and put some paediatric doses with that,” Dr Darville told The Tribune yesterday. “That’s what we’re hoping for. That’s what we’re trying to see if we could get.

“But we would like to have it in country as soon as possible to assist with the opening of schools and knowing whether or not some parents would want to have their children have it.”

Asked if it was likely schools would resume in-person learning in January, the minister said: “I don’t—I don’t want to give a date because one hat don’t fit all.

“We first went into the southern Bahamas, central and now we are going into the northern areas because we saw that it was low lying fruit. We don’t have the population size and once (the Ministry of) Education is satisfied that the schools are ready and speaks with the staff and we go in to make sure that we have what we need in place for the protocols to work, we’ll begin to make those recommendations.

“But we are working very diligently to get some sort of face-to-face or some sort of hybrid model moving quickly because the kids are falling behind. So, this is a serious matter that we have at hand but we don’t want to just start opening schools and education and health didn’t have the opportunity to visit the schools.

“So, it’s a very tedious process. We are pretty much visiting every school or as many as we possibly can.”

Last week, Education Minister Glenys Hanna Martin said officials were hoping to soon announce a date for the resumption of face-to-face learning but disclosed that several schools will be unable to open due to an unsatisfactory state of repair.

Speaking in the House of Assembly at the time the Englerston MP did not give a timeline for the in-person opening of schools.

All Family Island schools are ready to open with the exception of George Town Primary and L N Coakley High, both in Exuma, Mrs Hanna Martin said.

So there won't be face to face unless they are vaccinated? Sounds like a vaccine mandate is in effect then.

... so a person can be "vaccinated" and spread covid, but not "unvaccinated"? Ok, that makes sense!

good luck with that

As reports of vaccine lies and failure hit the world the vaccine industry for profit is jamming Vax on Bahamians indiscriminately.

And after Darville gets the five to 11-year-olds all jabbed up, he's going to go after the zero through four-year-olds like Bella Walker, rest her soul.

This is completely retarded...Ok we know kids under 18 have statically no risk of death from COVID. Thats right as close to zero has you can go. So what's the logic of the vaccine? To protect teachers? But vaccination doesn't prevent transmission so vaccinated or not you're not doing anybody any favours accept sacrificing the educations of the thousand of Bahamian Children on the Pyre pharmaceutical hubris. Enough in enough...come on be better than Minnis, do the science thing, do the rational thing...Meanwhile private schools have been back to school for months with huge case loads or teacher death...does covid only go after kids that don't pay for education?

It makes no sense until you realize that the primary motive behind all of this is grift. Billions in government subsidies have gone to pharmaceutical companies in the past year and a half, and they are ensuring that they have a steady supply of customers to keep coming back for their products. Drug dealers in labcoats.

I am very curious as to how many people are going to go along with the third and fourth shots. Keep in mind that most people only begrudgingly took the first two under the assumption that they would be able to have a restriction free life. Will they line up for a third and fourth just to eat in a restaurant or fly to America? At what point do these people grow a spine and just say no to this unnecessary medical apartheid?

Meant to read - privates schools have been back to school for months with 'no' huge case loads or teacher death...

Yes @frustrated with 30+% fully vaxxed and 60% bullied into taking one shot..the third shot isn't happening... plus the proof is pudding cases collapsed as they did last November without vaccination...seasonality, prior infection, viral evolution are the primary drivers of this thing not vaccination rates.

Davis needs to be bold and be 'brave' - let this covid crap go and focus on getting our country back on the right track - we can't build a better Bahamas without bright young Bahamians - get them in school so they can shine...

Of course they target children under 12. SIckos just like our near neighbours that we have to follow like headless sheep. There be plenty more money to be made........

Is our Commonwealth independent of fauci, Pahwho and sands under a new government.

PAHO Fascist health dictatorship, like legendary Adolf Hitler style is force gas chambering us with vaccines even though current world data has revealed an uptick in expectant illnesses by December as happened in Israel and across UK and Europe among the vaccinated, that prompted the use of booster shots for those immuno compromised.

Child vaccination because vaccines create mini Covid to promp the immune system to respond, leaked Covid through breathing will spread Covid to each home. Those vaccinated and elderly will get ill. Mr Strachan rattled Fauci when he questioned phyzar protease inhibitors. But Fauci realized you don't push things down our throats easily and he had no scientific/medical runover in The Bahamas. Blackmailing children through education is criminal and insane. They say 'parents choice' then turn around and deny education like they deny travel, employment and entertainment. PAHO vaccine with a whip. The masses have bent whole singing 'OH Freedom'.

Oh Freedom from this vaccine tyranny. 🙏

Israel, UK, Denmark, Iceland and many nations that had vaccine rollout in January 2021 went into lockdown by August 2021 because the vaccinated got Covid and many became hospitilized near death. We are at that point now for learned doctors to predict a fourth wave. The panic of illness will force further rush for Vaccines that is why thousands of doses where imported knowing the spectre of death is upon us. Solution. As Mr Strachan shot at Fauci pbyzer new pill due in January but ivermectin and hydroxichloroquine are readily avaliable for years.