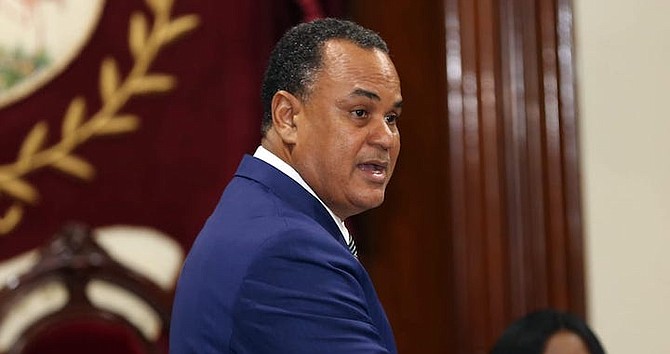 A Cabinet minister yesterday conceded that Bahamians are becoming increasingly “alarmed” over the $10bnm-plus national debt and “systematic” action is needed to address it.

Michael Halkitis, minister of economic affairs, told the Senate in leading-off debate on the Speech from the Throne that the newly-elected Davis administration is “setting the foundation for sweeping fiscal reform”.

Placing much emphasis on committees, namely the newly-established Debt Advisory Committee and Revenue Policy Committee, he indicated plans to change the fiscal culture within government while acknowledging growing concern that the weak public finances could drag down the wider economy and entire country if not addressed.

“Many Bahamians are alarmed by the level of our national debt,” Mr Halkitis said. “It’s something that must be addressed in a systematic manner and we are going about that.” Tribune Business revealed earlier this year that the $10.356bn national debt at end-June 2021 was larger than the size of the Bahamian economy, producing a 100.4 percent debt-to-GDP ratio.

The Davis administration’s revised deficit represents a near 10 percent reduction on the $951.8m forecast by its predecessor, with the cut almost entirely due to 2021-2022 first quarter revenues exceeding projections by just over $90m. Deficits of $351m and $148.7m are forecast over the next two Budget years, taking the national debt to $11.293bn by mid-June 2024.

Meanwhile, promising to continue the former administration’s public procurement reforms, Mr Halkitis said: “Under this administration, procurement policies will be more transparent and more efficient, ensuring that all government engagements and purchases are done in accordance with the highest standards.

“This may not be the highest profile or exciting policy issue, but it is very important that we end inconsistent, discretionary procurement procedures. To complement these reforms, we will also bring greater transparency to public financial management so that it is clear who is receiving government funds, and that the Government is getting value for money.”

“If the past few years have taught us anything, it is that we cannot continue to be passive about our national development. To proceed with the economic and revenue models of the past would be a mistake. What we need more than ever are big, paradigm-shifting ideas.

“For our administration, this means delivering a more diverse economy through investments in technology, renewable energy, sustainable tourism, and the green, blue, and orange economies.”

Some observers may argue that no “big, paradigm-shifting ideas” have been unveiled yet, but Mr Halkitis pledged to ensure Bahamian investors are placed on an equal footing with their foreign counterparts.

“There is a long-standing perception that The Bahamas rolls out the red carpet for foreign direct investors while we leave domestic investors to fend for themselves,” he added, repeating what has been acknowledged by all previous administrations.

“We will put policies in place to change that perception. Bahamians on every island must have access to the same kinds of funding opportunities, land grants, tax inducements, concessions and incentives that foreign direct investors have access to.”

Turning to the Government’s digitisation initiatives, Mr Halkitis said: “We recognise that it is time we push government processes into the 21st century. We all know the key role that digitsation will play in speeding up processes and improving ease of doing business when it comes to government services.

“We are talking about faster processing times, the use of data analytics and machine learning to inform smart policies, and enhanced access to e-services throughout The Bahamas. The Government will be investing a number of resources, including the existing $30M Inter-American Development Bank (IDB) loan, to see the digitisation process through to completion.”

Good luck! Action must follow announcements! Think big and now act big. An uphill battle. The elephant in the room is growing.

Step 1 would seem to be selling off BPL so the public treasury does not need to guarantee any more BPL debts and fuel purchases.

If BPL is sold, would government buildings then have to actually pay their bills? Can you imagine the utility bills for the numerous government facilities which have air conditioning running year round including weekends and holidays?

How much more debt will Halkitis & his merry band hang around the necks of Bahamians in the next 5 years? How will this PLP Cabinet be any more fiscally responsible than previous governments? Will this government be able to meet its short term fiscal obligations (2-3 years) without putting more taxes on the lower & middle class Bahamians? ....... Halkitis is quiet on that.

Nothing will change as our politicians never have the balls to make the changes necessary. As concerned said sell BPL, also sell Bahamasair. In fact sell everything Government has no need to be in. Then reduce Cabinet to 10 people max, and reduce most civil service as well. Then if that doesn't work we can start talking about taxing more. But don't tax more without doing other things.

Honestly, skyrocketing debt is a problem not unique to the Bahamas. Will the US ever pay their debt back? Anyone with a grain of credibility will tell you that answer is no. They are looking at removing the debt ceiling entirely.

Will Canada ever pay their debt back? What about Japan that had a debt-to-GDP ratio around 250% during the Recession? Balanced budgets are a thing of the past worldwide. We are just going to keep pretending until the charade known as the modern financial system goes down in flames.

Those countries strategically take on debt because the investment of that debt will outperform the debt servicing.

Far as I can tell I see no long-lasting investments in the Bahamas that outperform our $10 billion debt. Remember how the government blew the money that was supposed to build the stadium? That was an example of how the country is managed at large. We take out a mortgage and spend that money on having a good time. Then end up with no house, no money and debt to pay.

these countries don't borrow at 9%

What did this debt buy us? Where did it go?

Bahamians deserve to know. It will take generations of Bahamians to pay this debt for no apparent benefit.

Selling away the country won't fix the problem because the same practices will continue until we have to sell again. Sell the environment to cruise ships, hotels, industry and land to foreigners that Bahamians can never afford to buyback. Sell until we have nothing left. PM Davis gave a speech at the UN COP26 urging environmental sustainability else Bahamians will become climate refugees. We also need financial sustainability or we'll become financial refugees. It's already happening, refugees in our own country, our largest private sector is tourism where we learn to be servants to those enjoying our country in ways we can't.

We have too much government. For example: In Britain 1 MP represents on average 92,000 people. Based on the Bahamas population we should have 4 MPs for all of the Bahamas. We have on average 39 MPs, what are their salaries and is it worth it? Are we getting value out of our government?

The country needs more privatization and not owned by the corrupted political elite. Create a healthy competitive culture where Bahamians have worthwhile opportunities for employment and are rewarded for growth, productivity and innovation. The government fosters a culture of bureaucracy, nepotism, seniority and frankly laziness. If you don't join government jobs with a lazy attitude you'll surely have to develop laziness to survive the job and you better hold onto it because there aren't many opportunities that will offer a livable wage.

No way out. Let’s wait for the IMF doing the restructuring in 2022. Let the market speak. The country can’t sustain new debt at 9+%. Latest S&P downgrade is another nail in the coffin. Good luck to the new government!