Which Way To Go On Sex Offenders? 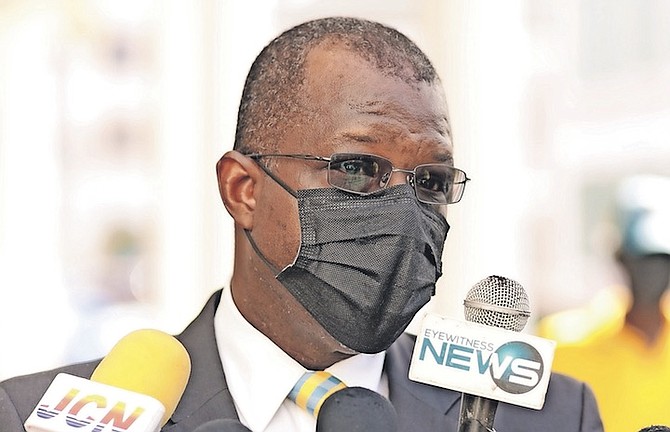 NATIONAL Security Minister Wayne Munroe, QC, has questioned the efficacy of a sexual offenders register saying he would prefer a ten-year track of prisoners after their release.

Mr Munroe told reporters yesterday he is unsure of a register’s value given the size of New Providence.

He added he is much more persuaded to follow the Parole and Re-entry Committee’s 2016 recommendation that dangerous criminals be monitored for up to a decade after their release.

Mr Munroe said he believed this method would be more useful. Nonetheless, he said the government would follow through with the register if it may prevent just one single offence.

In recent days there has been renewed outcry for a sexual offenders registry.

It comes after the death of four-year-old Bella Walker on Friday. The child died at Princess Margaret Hospital after she was brought to the facility with injuries about the body.

Police have not said that Bella was sexually assaulted, however. Last night, police said the child - who has been officially identified as D’Onya Bella Walker - died as a result of blunt force trauma to the body which resulted in multiple fractures.

Yesterday, Police Commissioner Paul Rolle said a man and woman remain in police custody in relation to the investigation.

Yesterday when he was asked about the progress of implementing a sexual offenders register, Mr Munroe said an appointed day notice had been signed by an Attorney General some years ago. Although this was the case, he said he was not certain if the Attorney General was the proper minister to sign the document.

“I’m asking the Attorney General (Ryan Pinder) for an opinion on that but I’m going to be briefed on this on Thursday,” Mr Munroe said. “My understanding is that the software is here and available that there was one person being tracked to test the system and I will find out on Thursday why it has not been fully deployed already. The impression I get is that it was ready to be deployed and was simply waiting on the say-so of the minister.

“While I hear all of the talk about a sex offenders register, I would question its efficacy. We live on an island 21 by 7. It’ll take you exactly 45 minutes to get from one end of the island to the other end of the island so I’m not sure what value there is on knowing who is on the 21 by 7.

“But if it may prevent one offence, we’re going to follow through with it.”

He continued: “I am much more persuaded that a recommendation by the Parole and Re-entry Committee 2016 is more useful and that is a proposal that any dangerous criminal will be subject to being tracked with conditions after they are released from prison. So, if you are a sexual predator when you’re released from prison, we will monitor you electronically for up to 10 years after you get out of prison.

“To my mind that is more useful because we will know where you are 24 hours a day and to my mind that’s certainly better.”

“We don’t intend to change any of the legislation. This has been too long in the planning and the execution.

“The only change that I have seen suggested that instead of the person reporting just once a year they report more frequently than once a year, but the registrar is appointed, it’s a known person. The reporting sites have been identified and it’s just a matter of getting it done and after the briefing on Thursday they intend to get it done.”

Mr Munroe maintained that crime is a consequence of society.

“We raise criminals so when I have a child and I don’t properly socialise the child and the child decides to commit crime that is how crime is committed,” he said. “We through (the) Citizen Security and Justice (initiative) we’re talking about - and you would have heard it in the House - the implementation of community centres to help to raise children better.

“The police cannot stop somebody committing a crime. Parents raise proper children; society raises proper children. When we have young men 15, 16, 17 years old deciding that their career will be to kill other people then that means we’ve had a serious societal failure in raising that person.

Is that tracking system foolproof? How will unsuspecting people know who is an offender? Will the police be forthcoming with "off limits" zones for the tracked sexual predators? What if the offender removes the tracking device?

LMAO...foolproof...you forget where you is eh? LOLOLOL

“But if it {the very costly and useless tracking equipment} may prevent one offence, we’re going to follow through with it.”

This one sentence alone uttered by Munroe tells us his head is full of Jello. The man does not have an iota of common sense but does appear to be attracted to shiny objects.

Munroe is so obviously tapping into his predecessor's lucrative gravy train of very expensive electronic surveillance contracts for equipment that is unsuitable to our environment, making it essentially useless and worthless from the get go.

I agree. How could he "see no value" in a parent knowing if the person next door is a child molester, or knowing if the a child care aide is a pedophile? He must be touched in the head. And to make such a cold remark in light of what just happened he should be ashamed!

All I want to know is that there is a database that anyone can access to identify if someone is a sexual predator.

A parent needs to be able to check that people in a position of care over their children are not convicted sexual predators.

A convicted person should also have to report travel or change of residence and should be legally barred from working in any job that gives them access to children. They should be court ordered against living with any child and they should loose custody of their children with a state imposed no contact order automatically filed on the Childs behalf.

In addition I want to say I believe we need to amend the books. Murder of a child, mentally disabled person or an infirm elder while committing a sexual act by abusing a duty of care over the individual must have a new definition. Call it depraved murder for example. Listed on our books as the worst of the worst with the only punishment being death by hanging.

Munroe will look you straight in the eye and tell you the convicted sex offender has more right to privacy than your child has to protection from one of these monsters. And thousands of them are roaming around in our society each day looking for their next young victim.

His track record certainly confirms what you said.

That is what is so scary about Munroe. It is time for the Bahamian Court of Appeal to be our final Appellate Court for our country's criminal matters. This crime against Bella surely qualifies as a "worst of the worst".

But we're an independent country tho ....... It is high time that we trust our systems of justice to deal with our crime problem.

I actually partially agree with Munroe. You can end up on the sex offender registry, and suffer the same stigma as a child molester, in the US simply by getting caught with a prostitute or escort. It is an absolutely simpleminded and non-sensical system.

Which is why there needs to be parameters for being placed on the list. Placing any and every sexual deviant on the list isn't what is needed, so what if you enjoy sex in public that's no reason to be on the list, but enjoying sex with children is. So it is up to the magistrate to use sound reasoning and judgment when determining who to place on the registry.

I'm trying to understand the part where monitoring would only be for 10 years. So after 10 years sexual predators are reformed? Wayne Munroe just showed me what I knew all along...he's a dummy masquerading as a person with sense.