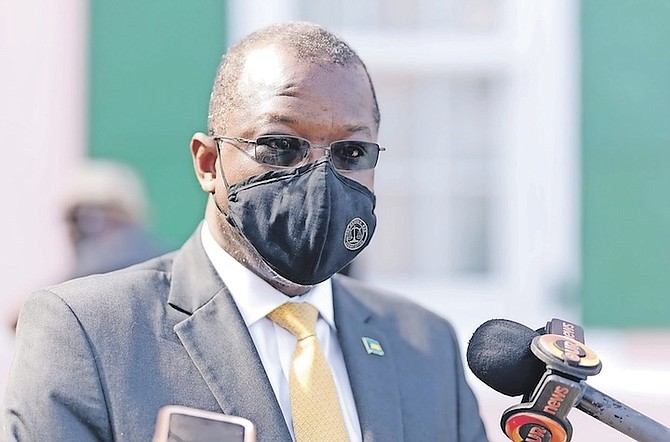 THIS week has been hard for Bahamians. Ever since news broke late last Friday that a beautiful, young baby girl affectionately known as ‘Bella’ lost her life, there’s been a pall cast over the nation.

There has been noticeable verbal lashing out from grieving Bahamians on social media, upset at the senselessness of it all.

An online petition championing the return of the cat-o-nine tails has racked up close to twenty thousand signatures in record time.

Many of our people – fueled by unproven claims on social media – are crying out for a much-discussed sexual offender’s registry. Many are just crying. Some groups have even taken to the streets.

In the midst of all this, the Minister of National Security Wayne Munroe found himself in the spotlight.

At this week’s press briefing facilitated by the Office of the Prime Minister, Mr Munroe addressed the media and fielded questions.

From the break, he seemed peeved.

He talked a little about Bella’s tragic end, careful not to say too much since the case is now before the courts. Munroe laid out his thoughts on a sexual offender’s registry (he questions the efficacy), made glib remarks directed at those he feels injected unproven elements into this national tragedy, and appeared pretty much done with “some” Bahamians.

Then a reporter asked a question that opened the floodgates.

Reporter: “What would you say to critics who say that you previously represented a sexual offender so you wouldn’t put, I guess, the necessary effort into the sex offender’s registry that somebody else would have?”

Munroe seemed upset. Not at the reporter, mind you, but likely at the droves of online “stupid’’ Bahamians who have indeed raised the same question and hurled accusations at him from the comfort of their keyboards.

The minister went on to liken himself to a hacker who, I guess, once hacked the law for his clients’ benefit? He also painted the picture of himself as someone who can defend a city because he knows how to attack the city, a feat anyone unlearned in the ‘art of war’ could never pull off.

As someone who has interviewed the National Security Minister in the past (while he was a criminal defence attorney and candidate), I feel I have a fair understanding of his personality type. He’s a “plain speaking” fellow. So I wasn’t surprised he “popped off’ because of that question.

Munroe (like me in some ways, honestly) is not a politically correct kind of guy. Indeed, you can’t get less politically correct than calling a whole swath of the populace “stupid” because of their emotional reaction during a trying time. (Disclaimer: I know I wouldn’t have done it).

With the “stupid” genie now out of the lamp, Wayne then went on to accuse Bahamians of wishing and wanting there to be a darker abuse aspect to the case, and that’s where he lost even me.

In truth, when the news of this heinous case first broke, it was a well-known (PLP leaning) online “news” website that “reported” on these unproven darker elements and lit all of social media aflame with outrage.

As the Minister of National Security in the Progressive Liberal Party (PLP), a party that went so far as to write to Facebook’s Mark Zuckerberg about “misinformation” earlier this year, you would think Munroe would know and address that directly. Instead, the “stupid” Bahamians on the receiving end of this propaganda became objects of his wrath.

Undoubtedly, Munroe is frustrated at having to defend his motives as he attempts to close the loopholes he has identified in “the system”, to the benefit of Bahamians. He’s had a long and successful career both interpreting and arguing the law.

But now he comes before Bahamians as a servant and politician, and rule number one in the politician’s handbook is certainly “try not to offend or alienate your constituents unnecessarily.”

We all want the minister to succeed at his job, but it would be stupid of him not to realise that in times of national mourning, sometimes it’s “not what you say, but how you say it.”

Not only have “some” Bahamians been labeled “stupid” this week, but apparently, a bunch of us are “lazy” too.

At least, that’s the word a top Central Bank inspector used to describe those amongst us who have yet to grasp or take advantage of online and mobile banking.

A little background: Late last week, Minister of Foreign Affairs Fred Mitchell made an impassioned plea in the House of Assembly for parliament to do something about the “atrocious” fees Bahamians have to pay to (Canadian) banks, which, according to Mitchell, “don’t give a heck about what’s going on down here.”

Mitchell referenced Barbados Prime Minister Mia Motley, whom he hopes will provide model legislation we can use here to “right this wrong”.

Fast forward to this past Tuesday, when a little-known Central Bank employee named Charles Littrell, an Australian import, lambasted Bahamians whom he feels have brought these millions of dollars in fees on themselves.

Littrell told Bahamas Institute of Chartered Accountants (BICA) members that “probably 80 percent” of the fees were generated by people’s “banking habits” because Bahamians chose to bank in person.

According to Littrell (as reported in this newspaper): “Bank fees are a great thing for politicians to whinge about…most banks would be happy not to charge those fees…ninety percent of people in those queues would be better off doing online and electronic banking…our banking habits impose costs on the banks that are reflected back in their fees...probably 80 percent of the fees generated are [the result of] the choice of people in how they do business. I don’t have a lot of sympathy for that.”

The Aussie went on to say: “We’re in the middle of a pandemic. Do your banking online, do your banking on a mobile phone, look at remote payment systems, and things like that... if people are too lazy to switch, then it’s their own damn fault. Don’t come complaining to us about fees when you could have switched.”

“Don’t come complaining to us?”

Imagine telling “Grammy” or “Granddaddy” who bank in person – as they have been doing for most of their lives – it’s “their own damn fault” for not getting with the programme? And that they, who stand on long lines for hours inside (and outside, mind you) of banks that they’re ‘lazy?’

For his part, Central Bank governor John Rolle has offered a much more sober approach. In January of this year, he pledged to deliver “greater transparency” on commercial bank fees, adding that “governance, transparency and consumer protection will also require bolstering.”

That’s what Bahamians want to hear from those in positions of power. Not the verbal beat down Charles Littrell delivered (this of all weeks) in front of a room full of accountants.

(On a separate note, did anyone in that room stand up for Bahamians? Anyone, anyone? Bueller? Bueller?)

Now the exciting part of this conversation is what’s to come next.

I take it Mr. Littrell is not too familiar with Mr. Mitchell, especially when Mitchell has power.

You want whingy? Well, Littrell, meet the “whingiest” Bahamian politician in the history of this tiny country.

Having incurred the wrath of Mitchell on many an occasion, I look forward to watching this debate play out. Mitchell says bank fees have been his “whipping horse” for a while. And now Littrell has (inadvertently?) offered himself up as a new ‘whipping boy.’

Good luck with that.

At the end of the day, I’m sure lessons will be learned; it’s not what you say, but how you say it.