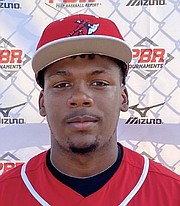 LAHIEM Bell is headed to NCAA Division I baseball.

The 6’1”, 225-pound catcher was announced as a member of the 2022 early signing class for Jackson State Tigers baseball programme in the Southwestern Athletic Conference.

Bell and the other signees will join the Tigers in the Spring 2023 season. The group includes three pitchers, one outfielder, one catcher and one infielder, including a two-way player.

“We look forward to seeing our fans out at The ‘Bob’ this spring.”

The Indians were eliminated in the Regional Quarterfinal with a 3-0 loss to Palm Beach Central. Bell finished 2-3 in the season finale.

The Indians won the Florida High School Athletic Association Class 7A District 9 title to earn their spot in the regionals.

Bell was 0-2 in the semifinal win over Centennial but finished 1-2 with one run and one RBI in the District title game win over Treasure Coast.

Bell had an immediate impact on the programme and began April with home-runs in back-to-back games as a part of the Indians’ 18-game winning streak.

He finished 2-4 with one home run, two RBI, and a run scored against Centennial (April 2) and had identical numbers the following game against South Fork (April 6).

Bell continues the tradition of Bahamians on the Jackson State Tigers roster.

Johnson said his desire to sign more international players to his programme came from watching a talented Bahamian national team play at the World Baseball Challenge.

“I was in the World Baseball Challenge in British Columbia and I saw the Bahamian national team, and all their kids were teenagers playing at the highest level of international baseball,” Johnson told the Clarion Ledger back in 2016. “I ended up going to their national games, see a couple of kids and end up getting three of them to come. (Diversity) is normal for me.

“It’s good for the Mississippi guys because they don’t see that much diversity and it’s a good situation for these guys to get to know something about different cultures.”