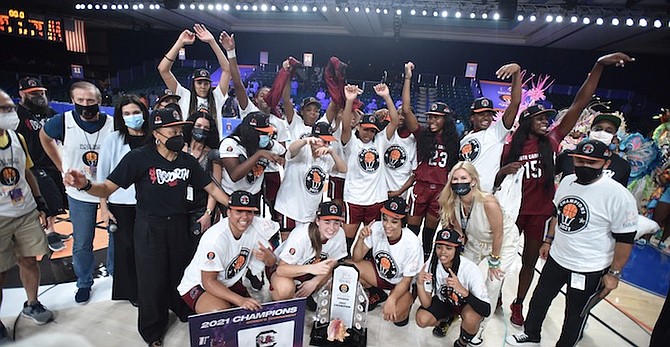 The South Carolina Gamecocks’ defensive effort powered a 73-57 win over the No.2 UConn Huskies yesterday in the championship game at the Atlantis resort’s Imperial Arena.

The Gamecocks went into the fourth quarter with a slim 57-54 lead, but limited the Huskies to just three points in the period, including a scoreless five-minute stretch to conclude the game. 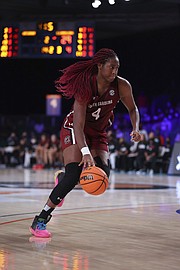 Gamecocks head coach Dawn Staley said it was an honour just to participate in the first edition of the event which she considers a milestone in the development of women’s basketball.

“This was great. The atmosphere was great. The Battle 4 Atlantis is run by a woman - Lea Miller- Tooley, this is the first time they are having a women’s tournament and it’s great,” she said. “We’ve missed out on 10 years on this type of atmosphere. So I hope moving forward great teams will come down here and play.”

South Carolina improved to 6-0 on the young season and recorded two wins against ranked teams at the Battle 4 Atlantis. Connecticut suffered their first loss of the season and fell to 3-1. “It is a challenge. You are going to play great competition and you are going to measure yourself against the best,” Staley said. “But the sun is out every morning, every day you get a beautiful sunrise, you get to wear shorts, I brought my [dog] Champ down here to meet paradise and it was a great experience.”

Reigning national Player of the Year Paige Bueckers led the Huskies with 19 points, but was limited to just six in the second half. The Huskies also got 14 points from Evina Westbrook and Chrystin Williams scored 10.

“Our players are determined. They are resilient. We knew exactly what we had to do,” Staley said.

Monday’s title game marked the 61st meeting between teams ranked No.1 and No.2 in the AP poll. With the Gamecocks’ win, the top team holds a 38-23 advantage in the matchup.

With the possibilities of the top-tiered matchup affecting the polls, the AP delayed the release of this week’s poll from its traditional release on Monday to yesterday.

The same teams met last year in a February matchup. UConn was the No. 2 team in that game as well and won 63-59 in overtime. “We didn’t really talk about last year’s game too much,” Boston said. “We have new players so we were kind of just thinking about what we were going to do in this game.”

“She just didn’t get enough help today,” he said. “You’re really good when the other players around you are really good and today, I don’t think we were at all.”

The No.23 ranked South Florida Bulls pulled off the upset in the third place game with a 71-62 win over the No.9 Oregon Ducks.

The men’s tournament, also presented by Bad Boy Mowers, will move into its 10th edition, this week from November 24-26 and will feature several returning programmes.