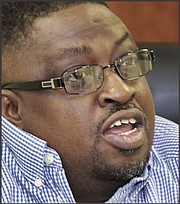 • One sets decision day February 12, the other March 12

• Labour chief says both positions will be ‘synchronised’

The Government is moving to resolve potential confusion over the deadline for when employers must decide whether to recall COVID-furloughed workers, a senior official said yesterday.

Robert Farquharson, the Ministry of Labour’s director of labour, confirmed to Tribune Business that “a move is afoot to synchronise” the contradictory same-day announcements made last week by Senator Ryan Pinder, the attorney general, and the Prime Minister’s press secretary.

Clint Watson, giving the weekly press briefing by the Prime Minister’s Office, said the clock would start running from December 12, 2021, on the Government’s decision to extend the furlough period by an extra 90 days.

Selecting that date, which was the original furlough expiration data under the Minnis administration’s COVID emergency powers, would extend the deadline for employers to decide whether to recall staff or terminate them to March 12, 2022. The emergency powers, which ended on November 12, 2021, included an extra 30 days before the furlough period ended, taking it to December 12.

Mr Watson said last Wednesday: “Under the previous administration, what was given was a 30-day window after the emergency orders would have expired for companies to make a decision and determination as to what they were going to do. Now, that 30 days would take us to December 12.

“The law also provide a 90-day window, which takes us to March 12. What has to happen within that window by March 12, companies either have to disengage the persons or call them back to work. That is the law and that is the parameters that we are now working in for companies to make a decision.

“So they have until, by the latest, March 12 to either disengage those furloughed workers or return them back to work and the government is standing behind the law.”

However, this was seemingly contradicted by Mr Pinder in a media interview given the very same day. As the Government’s chief legal adviser, he said the clock on the 90-day furlough extension started running from November 12 - when the emergency powers ended - and not December 12 as suggested by Mr Watson.

As a result, the furlough extension would end one month earlier on February 12, 2022, based on Mr Pinder’s position. “Our advice is that the 12-week clock started November 13,” the attorney general said of the furlough extension. “Others are of the opinion that the 30-day extension that was in the emergency orders gives 30 days, plus 12 weeks.”

This indicates that there are differences within the Davis administration on the issue, and the two pronouncements fail to give both employers and furloughed employees the certainty and clarity that they cherish.

Sidestepping the question of who was correct, Mr Farquharson declined to be drawn on which timeframe will be adopted. “There is a move afoot to synchronise the two positions, and I will await the synchronisation of that,” he told Tribune Business.

“Since the decision of the Government to end the emergency powers, a number of employers have sought some clarity and I suspect between now and the very near future there will be a definitive synchronisation of the position between the Prime Minister’s Office and the attorney general.”

The Employment Act provisions, which require employers to recall furloughed workers within 90 days (13 weeks) or otherwise pay them due severance, were suspended under the former Minnis administration’s emergency powers in an effort to both preserve jobs and delay payment of severance packages that could have put cash-strapped firms out of business at COVID’s peak.

The latest 90-day extension would take the COVID furlough period to almost two years since the pandemic’s start. Mr Farquharson said the 90-day limit was designed to “put a lid” on employers who were placing staff on furlough indefinitely, sometimes for four-five months or longer, which enabled them to avoid paying due severance to the worker’s financial detriment.

“The intent of the legislation was certainly because, prior to 2017, we had a number of hotels - particularly in the Family Islands - who would lay people off for long periods of time,” he explained of the 2017 reforms.

“There was no provision in the law mandating that they bring people back after a certain period of time. The intent of the law in 2017 was to put a lid on employers who laid people off for four to five months on furlough.”

Mr Farquharson said many Bahamian employers are not waiting 90 days, and have already moved to recall furloughed staff. No official unemployment data has been produced since the pandemic’s start in March 2020, making it hard to determine how many workers remain on furlough, but hundreds - if not thousands - of hotel workers are said to still be in that status.

“A number of employers have already begun the process,” the labour director told this newspaper. “A number of them are not waiting the 90 days. A number of them have taken the position to bring them back on, particularly in the tourism and hospitality sector and especially in the Family Islands.

“A number of properties are seeing increased occupancies and increased bookings, so they have begun the process of re-engaging people who were on furlough. That’s a positive sign for the economy that the process has already begun.” Mr Farquharson pointed to Sandals Royal Bahamian’s decision to recall 850 furloughed staff for its January 27, 2022, re-opening as one such example.

Dave Beckford, the General Workers Union’s first vice-president, yesterday called on Atlantis and other employers to pay due severance to workers who were recalled but did not want to return. He added that recalled workers, who declined to go back, were in a difficult position as they could “be treated as abandoning their jobs”.

Noting that some furloughed employees will have either started their own businesses or gone on to new jobs after being sent home for up to 20 months, Mr Beckford said: “What I’m advocating for is that employers like Atlantis give them redundancy packages if they do not want to return and wish to part ways.