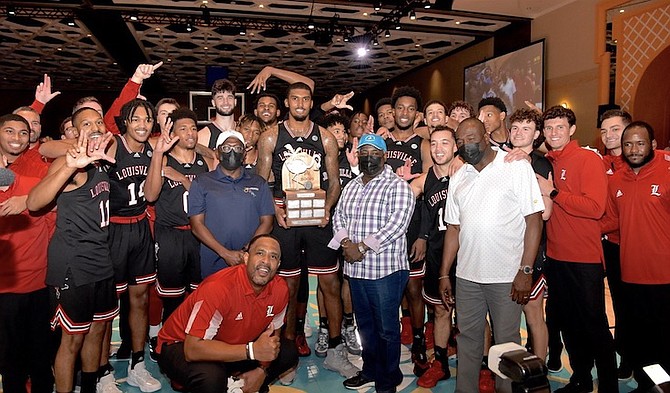 The Louisville Cardinals claimed the “Bahamas Championship” Saturday with a 63-55 win over the Maryland Terrapins. The Cardinals improved to 5-1 with acting head coach Mike Pegues at the helm as head coach Chris Mack continued his suspension.

Pegues credited his team’s downtime at the Baha Bay Water Park for their rejuvenated focus on the court for the tournament finale.

“I think its because I let them go to the waterpark Wednesday morning. Sometimes I can be a pretty hard guy and I felt like it was a no brainer that we had to let these guys breathe a little bit,” he said. “I leaned on them pretty well and we scheduled some downtime after breakfast and I think it was good and refreshing for everyone to get away. I even went down the water slide myself, it was exhilarating and it was good. We got away for four hours, the guys were happy, I think everyone decompressed and thankfully so because we came out and played pretty well.”

It was the 31st regular season championship in programme history.

Both teams play in the Big Ten/ACC Challenge on Wednesday with the Terps hosting Virginia Tech and Louisville playing at Michigan State.

Fredrick King Jr. King, a product of the NBA Academy Latin America, will join the programme in the upcoming fall campaign.

The 6’10” forward chose the Cardinals ahead of the Washington State Trojans, Creighton Bluejays, Georgetown Hoyas and Miami Hurricanes.

ESPN listed King as one of the class of 2022’s top prospects emerging from the NBA Academy Invitational in September.

The No.18 ranked USF Bulls may make the biggest leap in the pools following a weekend where they posted two wins over top 10 ranked opponents.

The Bulls concluded their time in The Bahamas with a thrilling 57-54 win over Stanford on Friday.

Sydney Harvey hit the go ahead three pointer with 2.8 seconds left to play. She finished with a team high 15 points.

“Coach called the play and I hit the shot and we had a couple of defensive stops and that was that,” Harvey said. “It was a very exciting game to play in.”

The Bulls played four ranked teams in their last five games. “That five-game stretch was difficult on us,” Bulls coach Jose Fernandez said.

“We were tied up in the fourth quarter against Connecticut and rebounded against Oregon. This was good for us. We had two days to get ready for them. We defended. We got the stops when we needed to especially at the end of the game.”

The defending NCAA National Champion and No. 7 Stanford Cardinal which finished 2-1 in games against three ranked teams over the weekend.

The Cardinal opened the tournament with a 69-66 win over the No.4 Indiana Hoosiers and after the loss to USF, concluded play with an 86-67 win over the no.2 Maryland Terrapins.

The shorthanded Terrapins, beset by injuries, went 0-3 in The Bahamas.

“I built this schedule so we would learn a lot about ourselves. This tournament, the adversity we faced, I think the biggest thing I’m disappointed in is our lack of competing today. We lost our poise, we lost our composure early in this game. Stanford had a lot to do with that. I thought they outworked us, out-hustled us, competed for 40 minutes. That’s what a championship team looks like. That’s obviously where we strive to be. They showed it for four straight quarters,” head coach Brenda Frese said after the loss to Stanford.

“We’ve got to get ourselves back and regroup, get everyone back, get healthy and be able to put the team together that we have.

“Again, liked our second half, especially our fourth quarter, but not really into moral victories within this tournament. We’re trying to play at a higher level than just winning a half or a quarter.”

Six of the seven participating teams have played in last season’s NCAA Tournament.

The Toledo Rockets won the “Nassau Championship” with a 79-70 win over the Coastal Carolina Chanticleers.