‘No Proper Search And Rescue For Rashard’ 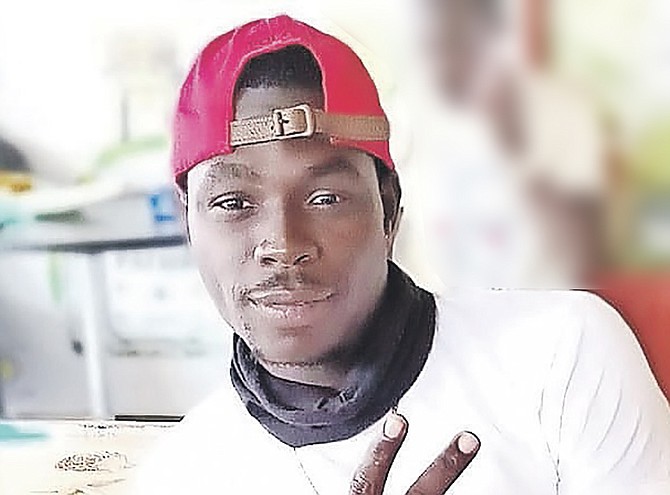 RASHARD COOPER, who was last seen on a jet ski in the area of Dundas Point, Abaco.

THE family of 30-year-old Rashard Cooper who went missing last week in Abaco is not satisfied with the police investigation and claims that a proper search and rescue was never carried out by authorities that fateful day.

According to police reports, Mr Cooper was last seen on a jet ski in the area of Dundas Point, Abaco.

Ashenique said they spoke with two friends her uncle was last seen with on the day he went missing around 6.45pm.

She was told that Mr Cooper and the two friends were at Brown’s Bay dock riding a jet ski.

“One of the friends had purchased a new jet ski and they were all testing it. They said he was the last one to go on the jet ski and it stalled out and Rashard tied the jet ski to a little cay,” she said.

The two friends, she said, told her that they told Mr Cooper they were going to get a boat to rescue him.

“The two friends left him there with nobody to watch him or reassure him that they were going to help him. They left him there…,” she said.

“The men said they then asked the police for a flashlight so they could go back and search for Rashard. When they returned, they said it was dark and they did not see Shard, they only saw the jet ski, and his stuff (at the cay),” she said.

Ashenique said the men said it took them two hours to find a boat.

She said they believed Mr Cooper took off his pants, socks, and his shoes, and jumped in the water.

She said the cay is not too far from the dock, about 400 metres away.

Although her uncle was not a strong swimmer, she said he could “manage” in the water.

Mr Cooper relocated to Abaco from New Providence about a year ago. He was employed as a mason and also did some roofing work. He has a two-month-old baby girl.

His niece described him as a very jolly person. “He was the life of the party. He loves to have fun and he was not afraid, he was brave.”

His sister Vanessa Lewis said the story of his disappearance is not adding up.

“Shardy was a loving, kind and humble young man. It is baffling to me right now because the story is not adding up for me,” she said.

“Standing on the dock… you could actually see the cay. So, my thing is why would Shardy leave if the jet ski is tied up and his friends said they coming back with a boat. Why would he jump in the water, if he is not a good swimmer?

“If there are two friends, one could go look for a boat and the other could have stayed there and keep watch and reassure him.”

She also said the men said that a woman customs officer had told them that someone was stuck on the cay.

Vanessa said that Mr Cooper’s friends told them when they went to police to report what had happened, they were informed that no Royal Bahamas Defence Force boat was available at the time.

She claimed that the residents of Abaco had conducted a search for her brother, but she did not think police searched for him.

“We saw people out on the shore searching for him, but to say the police, not that I know of,” she said.

“If our loved one and brother had drowned, wouldn’t the body already surface in six to seven days somewhere along the shores of Abaco?”

Vanessa said that when they went to the police they were only given Mr Cooper’s phone, $50, his bank card, and his licence. She said they never received his clothing – a pair of jeans and tennis, or his watch.

“Right now, we do not want him to be another statistic, someone has just gone missing, and nobody cares because it seems as if that happens a lot now in The Bahamas. People gone missing at sea, they do a couple of searches and that’s it, and the person is missing for three, four, five years.”

Ashenique said the family hopes that Mr Cooper is alive, but is also ready to accept and to face the worst outcome.

“At this point, if that means our family member is deceased which we are hoping it is not, we just want the body. Whatever information anyone knows whether it is hard to process or hard to swallow, we still want it. If they care and love Rashard, they would help the family. He is our blood and this is affecting my aunties because they raised him.”

Assistant Superintendent of Police Stephen Rolle said when the matter was reported to authorities, the police quickly mounted an operation to search the cay and the ocean for the missing man.

“Also they would have gotten assistance from the US Coast Guard to locate this young man on the land, at the cay, and in the waters. So far it has proven negative,” ASP Rolle said.

He said drones were also used in the search.

ASP Rolle said water searches have been stopped, but they are still conducting searches, hoping to find him.

“We can’t say whether he is dead or alive at this point, just that he is missing. We are hoping to find him and give his family some closure,” he said.

When asked the distance of the cay from the dock, ASP Rolle said he is not familiar with the location, but said he was informed that it was a short distance from the dock.

When asked about the man’s clothing, ASP Rolle said police are holding on to them.

“Once there is an active investigation those clothing would be kept in the event forensics needs to be done. Once investigations are concluded the items would be turned over to the family,” he explained.

“It is being kept for forensic evidence as he is missing, and we do not know exactly what transpired. He just went missing. There is nothing at the scene to suggest that it is foul play. We are going on what we have and that is a report of a missing person.”

ASP Rolle is appealing to family or friends who have information regarding Mr Cooper’s whereabouts that could help with their investigation to come forward and call the police.

Warning: Use of a jet ski without having the ability to swim for a long distance could prove dangerous to your health, especially in turtle rich waters where there are frequent tiger shark sightings.