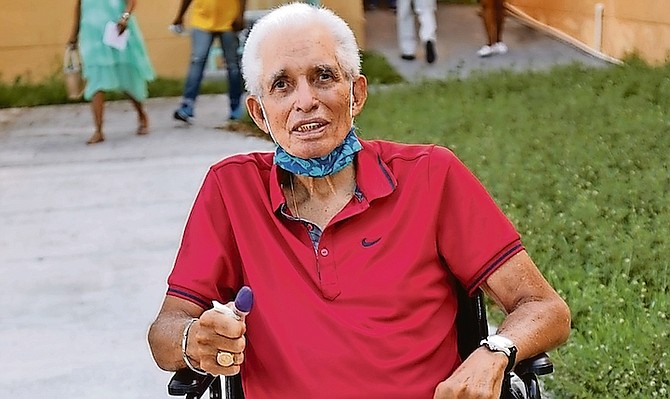 J Barrie Farrington pictured when he voted this year.

VETERAN hotelier J Barrie Farrington died yesterday, prompting tributes from people including the president of the Atlantis resort who hailed him as one who chartered the course to The Bahamas becoming an international destination.

Mr Farrington died after a long battle with cancer.

He spent 41 years at Atlantis on Paradise Island, which bore many other names over the years.

In 1995, Mr Farrington was named Hotelier of the Year and in 1997, Queen Elizabeth II honoured him with the prestigious title of Commander of the Order of the British Empire (CBE).

He received the Clement T Maynard Lifetime Achievement Award in 2008 for outstanding contribution to the growth and development of tourism. He was also a lifetime director of the Bahamas Hotel and Tourism Association.

Atlantis’ president Audrey Oswell referred to Mr Farrington as an inspiration to all.

“Our entire company is saddened and heartbroken by the passing of J Barrie Farrington,” she said in a statement. “JB, as he was affectionately called, had a deep and abiding love for tourism throughout The Bahamas and was instrumental in the development and expansion of it.

“He was an inspiration to all of us that were fortunate enough to have worked alongside him and could refer to him as a friend. At his retirement farewell in 2013, Sir Sol Kerzner praised JB for his immeasurable contribution to the success of Atlantis.

“We are so thankful and grateful to this tourism pioneer, who chartered the course of The Bahamas becoming an international destination. His legacy lives on and he will forever be an important part of the Atlantis family.”

“Over the years, Barrie was instrumental in fostering productive and collaborative relationships between the owners and operators of the resort properties on Paradise Island with the government of the day,” Mr Ingraham said.

“He was an early Bahamian success story in hotel management and administration and his contribution to the Bahamianisation of the senior management of international hotels operating in The Bahamas has been far-reaching.

“I think since his diagnosis with cancer he has proven to be a valiant fighter on that front. His candid discussion with the media about his bouts fighting three different cancers will have proven useful to many men in our society who face the undaunting circumstance of cancer in their later years.”

Mr Ingraham added that Mr Farrington had been an exemplar in the tourism sector throughout his career who fittingly demonstrated, “how one must live until you die.”

“I was impressed to see photographs of him earlier this year being vaccinated against COVID-19 and more recently casting his vote in the advanced poll of the general election,” Mr Ingraham said. “Barrie was a man committed to being a productive member of society right to the end.

Robert “Sandy” Sands, president of The Bahamas Hotel and Tourism Association, said those who work in the hotel industry will forever be grateful to Mr Farrington for his contributions to the industry.

“It is with deep sadness that I received the news of the passing of J Barrie Farrington,” Mr Sands said. “On behalf of the Bahamas Hotel and Tourism Association, I wish to express my heartfelt condolences to his family and friends; he will be missed by so many.

“We will be forever grateful to Barrie for his contributions to the tourism industry and to organizations such as ours. He was highly respected as a seasoned professional with a formidable understanding of the business of tourism.

“Barrie will also be remembered for his patience, his elegance and the dignified manner in which he treated others. Barrie was ‘old school,’ yet he understood that with progress, came change and adaptation.”

In 2018, he spoke with The Tribune about his battle with hairy cell leukaemia, prostate cancer and breast cancer.

In 2019 he published a memoir of his life, entitled “The Commander of Hawkins Hill,” which he had hoped to put on sale to raise funds for the cancer society.