‘I Will Wait For Minnis Speech’ 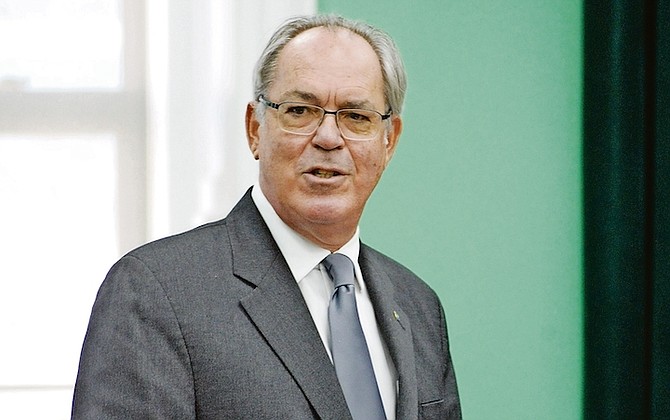 “The FNM chairman has said that nomination will close on November 18,” Mr Symonette said yesterday. “The former leader has said he will make a statement about his plans at the upcoming church service this Sunday. I will wait to see what he says before commenting.”

Dr Minnis has said he will reveal the direction he will take at the church service.

This comes as observers wait to see if he will contest the leadership position at the convention.

Earlier this month, the FNM’s Central Council agreed to hold a one-day convention on November 27 to settle the leadership race.

Meanwhile, FNM chairman Carl Culmer said last month that Dr Minnis indicated he would not offer himself up for leadership at the convention.

Some, however, believe Dr Minnis could still contest the post if someone nominates him.

Asked about this possibility, Mr Culmer said last month: “That’s up to the council. I will not want to speculate. I don’t believe in speculation. I believe that at the end of the day the process should take place and whatever the outcome is, we go from there.”

Asked whether Dr Minnis’ future was discussed during the meeting, Mr Culmer said: “None of those things were discussed tonight. At the end of the day persons are free to nominate. Nomination will close on the Saturday before and so they have between nine and five each day. Preparations will be made for ballots and nominations and so at the end of the day persons will have the opportunity to nominate.”

The one-day leadership convention will be the first time since 2016 that the FNM has held a convention. The party’s constitution calls for a convention to be held every two years.

And just who really gives a rat's arse about Brent Symonette's views?! LMAO

Wonder if the Davis premiership will review brungin about the Post Office multi millions dollars lease and everything like that including what if any are some of the the discrepancies as to the telephone call conversations between the two men's.
**Say Whaaat?.Someone has to be untruthful in their version tellin' big post office millions tales and everything like that — Yes?

Sounds like a return to the 1980s for the FNM

Never mind Minnis, he committed suicide by calling an early election trying to dodge the COI!

Brent Symonette on the other hand is a proven unscrupulous leech on the peoples' Treasury. Every time he gets remotely close to the Treasury he's had to be fired for unethical financial gain.

So from now on Brent is totally disqualified from doing anything but watching from a distance!!

Brent is also a Bahamian who invests in his country instead of just hoarding his money.....because he puts himself in a position to make money through his investments, doesn't make him a person to be hated or envied.

Today he and his family have much more of their net worth invested outside of the Bahamas than they do in the Bahamas.

@Still, how do you relocate a Billion Dollar Bank, Ready Mix Trucks and sweetheart of a Post Office Lease, prime harbour front properties' and everything more like that still avoid income tax,- Yes?

Brent making money through his investments is not an issue. The problem is his habitual instinct of unethical plundering and misuse of power for personal gain!

Secondly Brent has had more investments in Florida than he has in the Bahamas for over 3 decades!

Not to mention elsewhere in the Caribbean and Mexico.

He's basing his decision on a speech and not performance? LMAO

Theres no point in making a decision if you don't know what the person wants. Once Minnis makes clear what he wants then Brent can decide.

Brent too rich?? Bouy yinna go rest yinna cheap-sounding backside with that dumb talk about Brent and where and how he spends his money!!!

That sounds so damn childish and petty!! Now iffin yinna want to "roast Brent" because some er yinna think he can't "pass a piggy bank" without "pokin" his fingers inside of it. . .HAVE AT IT THEN!! But to carry on about him and his money, where he spends it and with whom he spends it. . .CHILE PLEASE!!

I find it strange that alla these niggars them around here got all kindda contracts and business relationships with government. . .teifin the tax payers "eye out they heads" and yinna een saying one damn thing!! So. . .yinna mean that when a shine do those things. . .tis alright? Then when a white BAHAMIAN does the same. . ."tar and feather" his backside??

Yinna know that this country een ger never "get off the ground" with the developed world until yinna could make a white man like Brent to be elected PM and don't worry about his legitimate business dealing. . .dealing that yinna allow any black niggar with "two coppers to rub together" to enjoy till he drop!!

I really don't understand yall at all! Yall want Brent to "bring and keep" all of his money in the Bahamas. . .but he can't be elected PM?? Well-mudder-tak-sic!!