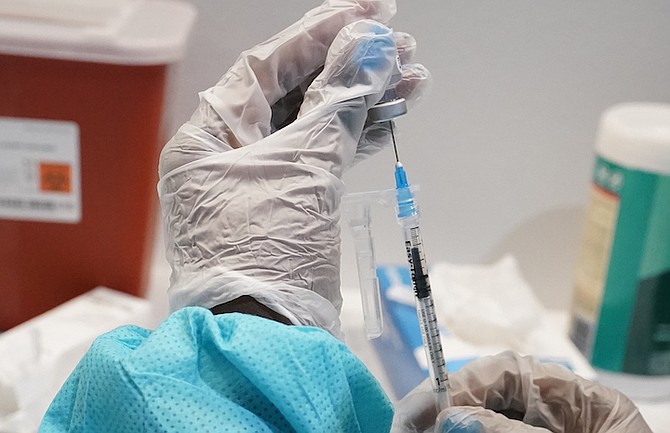 A health care worker fills a syringe with the Pfizer COVID-19 vaccine in the US in July. (AP Photo/Mary Altaffer, File)

HEALTH and Wellness Minister Dr Michael Darville accused the former administration of failing to do what was necessary to secure additional vaccines, leading to the current shortage in the country.

He also gave an update on when more vaccines are expected to arrive in the country.

He had previously said that the country should receive some 57,000 vaccine doses in the first week of November.

“The vaccines are on track,” Dr Darville said. “We have a supply of Pfizer that is en route. I was fortunate enough to have good news that the vaccines donated by the United States government, the Pfizer vaccine, are right behind and so the issue as it relates to vaccines is actually working extremely well.

“I would like to also say this. I didn’t want to, but when I came to office we realised that the reason why we experienced the delay in the Pfizer from the COVAX facility was because under the former administration, someone forgot to apply and as a result of that it pushed us in the back and so now because of negotiation it will be here in the first week of November.

“…With the COVAX facility, the responsibility (laid) with someone from the Ministry of Health or from the component authority to actually document what we are supposed to be doing. It was delayed and as a result of the delay, it could’ve been the election, we found ourselves when we came to office to move swiftly to resolve the problem and I believe if that piece of document was signed or conveyed we would’ve had the COVAX facility vaccine here in advance. Likewise for the donations from the American vaccine. Something or someone dropped the ball and we were placed further behind the line.

“So these things I had to resolve when I became minister through negotiations, thank God, with the United States government and the COVAX facility and PAHO, we are back on track. “. . .This is a reality I found and the delay of the vaccine should fall at their feet.”

Yesterday, Dr Darville said he disagrees with Dr Minnis’ assessment and highlighted the snap election being called in the midst of a pandemic.

“If you really look at what has happened around the world and you look at what happened in Jamaica and Trinidad and look at their cases, prior to the calling of the election and after the election, it is quite evident that election being called in the middle of a pandemic clearly demonstrates that you would have increased COVID cases and death. So I think his statements is a bit disingenuous because the facts are there and the epidemiological studies are clear that an election in the middle of a pandemic results in spikes in COVID as well as death,” Dr Darville said.

Dr Minnis also said the government needed to move quickly to stop the spread of COVID-19 in vulnerable Family Islands.

“Well in the Family Islands, just like I said before, we moved immediately to see exactly what’s going on in the Family Islands and to my surprise things were a lot worse than I even thought I would find,” Dr Darville said. “So after four years I find it very disingenuous that the former minister of health and the prime minister could speak about the Family Islands and the fact that they left the healthcare infrastructure in one of the most deplorable states. My job now is to not complain. My job is to go in there, fix the situation and begin to implement new measures that will begin to control the clusters and prevent community spread,” he said.

Meanwhile, he reaffirmed that the Davis administration has no intentions of renewing the Emergency Orders when they expire next month, but will instead bring legislation to chart the way forward.

“So these things I had to resolve when I became minister through negotiations, thank God, with the United States government and the COVAX facility and PAHO, we are back on track. “. . .This is a reality I found and the delay of the vaccine should fall at their feet,” said Darville.

The covid team must stay on top of emerging data and global trends as it appears another vaccine is to used to mend the inefficiencies of the vaccines taken across the USA and the globe.

The Bahamas, being about four months the leading nation's must assume that this will become our future business as usual. Thank God the PLP under Darville is showing flexibility, adapterbility God's grace and wisdom. There appears to problems around the world that are unexpected,driving nations to improvise as they occur, avoiding and admitting living up to new realities. Unlike Minnis.

But I wish the FNM them could just keep they mouths shut!! They sound just as retarded answering dr darville or Fred!! They think we don't know dr. darville and fred talking nanny? I hope both party bases can just "shut the hell up" already!!

Yall PLP sound like yinna "so suprised that yall won the election and now yinna don't know what to do next!! Hahahahahahahahahahahaha!! Think ween lookin aye?

My advice to the FNM for real nah. . .yinna een listened to we the people for the last four years!! We een want to listen to yinna right-up-in-now! Oh, and by the way. . .please don't "show" us what the PLP "getting wrong" WHEN YINNA DID SOME OF THE VERY SAME THINGS. . .please! Stop taking us for fools please. That just remind us of what yinna done to us for the last four years. So just give us some time to "forget" yall for a bit. . .really now!

So just sit back and relax. . .yinna gat five years to fight among yinna sef! Thanks for "things" done for the last four years. . .we will take it from here!