Gardiner not among Male World Athlete of the Year nominees 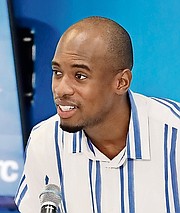 WORLD Athletics on Thursday released the names of athletes nominated for the 2021 World Athletes of the Year as the voting process begins towards the selection at the World Athletics Awards 2021 in December.

The list released so far for the men, however, does not include Bahamian Steven Gardiner, who added the 400 metre title at the Tokyo 2020 Olympic Games in Beijing, China in August to his World Championship title in 2019.

World Athletics confirmed a list of 10 nominees for Male World Athlete of the Year who were selected by an international panel of athletics experts, comprising representatives from all six continental areas of World Athletics.

The women’s list is expected to be released today and it will be interesting to see if Shaunae Miller-Uibo, who captured the gold as well in the 400m at the Olympics, will be included.

As for the men’s nominations, World Athletics says it reflects the remarkable range of exceptional performances that the sport has witnessed this year, at the Olympics, one-day meeting circuits and other events around the world.

“As always, the World Athletics Awards will recognise athletes who have performed at the highest level across the year, taking into account not only the Olympic Games, but the one-day meeting circuits,” World Athletics President Sebastian Coe said.

“We do recognise that athletes in some parts of the world faced greater challenges than others in accessing international competition this year, which complicated the nomination process.

“However, we saw some impressive breakthroughs at the Tokyo 2020 Olympic Games and we look forward to those athletes having more opportunities to shine next year, with five World Athletics Series events and a full schedule of one-day meetings on the calendar.”

Although he was undefeated this year in the 400m, and only lost in a 200m race at the end of the season, Gardiner didn’t participate in any major event outside of the United States this year, except for the Olympics.

The nominees for 2021 Male World Athlete of the Year are (in alphabetical order):

Damian Warner, CAN - Olympic decathlon champion; winner at the Götzis Hypo Meeting and national and Olympic record of 9018, moved to fourth on the world all-time list

Voting for the World Athletes of the Year closes at midnight on Saturday 6 November. At the conclusion of the voting process, five men and five women finalists will be announced by World Athletics.

The male and female World Athletes of the Year will be announced live at the World Athletics Awards 2021 in December.