Choked by a police officer on the street 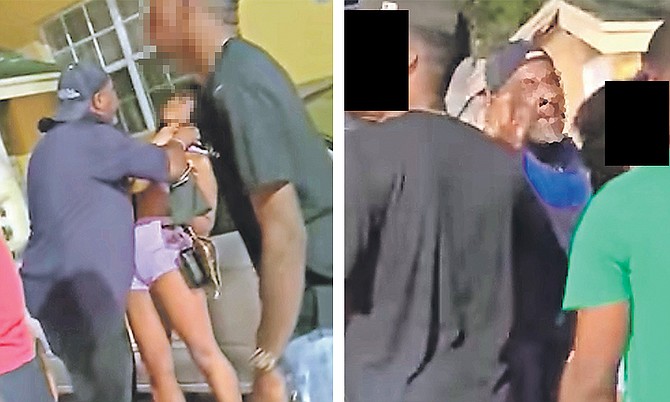 THE Royal Bahamas Police Force is investigating after an official complaint was made yesterday against a plain clothes police officer caught on video choking a woman outside a nightspot.

In the five-second clip video, a male police officer chokes a woman whose back is pressed against a car before demanding that someone bring him the phone of the person recording the encounter.

The video went viral on social media earlier this week, however Police Commissioner Paul Rolle said that a complaint was officially made yesterday afternoon.

National Security Minister Wayne Munroe also commented on the incident yesterday. He reiterated comments he made to The Tribune about the incident on Monday, telling reporters that anyone with allegations of police brutality should file an official complaint to the Royal Bahamas Police Force so that the matter can be investigated.

When he spoke to reporters yesterday morning, he said he was told by the police commissioner that there was no information that an official complaint had been filed on the incident in question at that point.

“Up to this morning, when I met with the commissioner of police, he indicated that a journalist had approached him with those persons and he had asked them to come and see the deputy commissioner of police who is concerned with discipline and to the time with me meeting with him before Cabinet today, he had no information that they had actually come in,” Mr Munroe said.

When asked if the officer in question will be reprimanded, Mr Munroe explained that there is a process that must be followed.

“You have to have a complaint,” he said. “Some things can be on video but you have to have a complaint. You have to first validate the video. You have to make sure that it’s not photoshopped, somebody has to come in and make a complaint because just as citizens are entitled to due process, police officers are entitled to due process. Once the complaint is made and once the material is brought, then the system will be engaged to deal with the police officer just as it was engaged to deal with the citizen.”

While noting that every agency has “good” and “bad” apples, Mr Munroe said it is his ministry’s job to root out the rotten ones.

“I have advised previously. . .that the police have no right to take your cell phone. I’ve advised that persons who have CCTV systems that if they fear that their DVRs will be taken, they ought to arrange recording off site,” the minister continued.

“Once you have the material to show that there has been malfeasance by the police officers in any regard, you should make a complaint to Complaints and Corruption (Unit) and if it rises to the level of criminality, you should make a criminal complaint and if nothing happens then that’s an appropriate case to involve somebody at my level.

“I’m concerned with checking that the system works properly. The system is designed to root out bad officers because in every profession you have bad professionals… The good apples have no interest in being in the same barrel with bad apples. If you have evidence, if you have complaints, please make them so the system can be engaged to deal with it.”

The officer involved should be fired, his actions are beyond disciplinary action, so he gets tapped on the wrist or scolded and then sent back on the streets to choke or maybe kill someone else, as he has shown that he is unfit to work for us, and to think this sissy would put his big nasty hands around that young lady's neck, where does he think he gets the right, perhaps he thinks that Gestapo Dames is still minister. I hope these women advocate groups come out in strong action against this sissy. A real punk.

This is obscene. This man needs a pschological evaluation. If he did this in the light of day with people all around him what is he doing in the cell when nobody watching. What is he doing to his wife?

I guess we bettas brace ourselves for some looting, burning and more statue destroying, or do black lives not matter when it’s black peoples doing da choking?

So the Police Commissioner sees a video of one of his policemen choking a woman and he does nothing? Does no member of the RBPF have the ethical, moral obligation to swear out a complaint when he/she becomes aware of these abuses of power, and criminal behaviour, or in the absence of any member of the public coming forward? How do they expect any citizen to act within the law if officers and their commanders refuse to do the same? Refuse to discharge their duty? Toadies and cowards!

She know what she did to get her a…choke

I am not psychic but you probably have a history of choking women also.

The COP is in a state of Catch-22. He is responsible for disciplining (Complaints & Corruption) and defending his troops against the social media frenzy. The time has come to separate the two for Joe Public's sake.