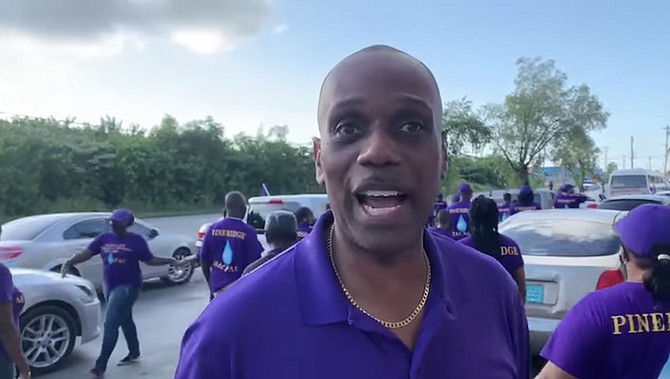 CANDIDATE Frederick McAlpine with members of his campaign team in this image from video posted on Facebook.

INDEPENDENT candidate Frederick McAlpine claims that history will be made in Pineridge this week, confident that he will be re-elected.

“It is going very good, he said. I intend to win,” he told The Tribune. I think we will make history in Grand Bahama this very week,” He believes that he is the only one who can stand up for GB if the government changes.

“If the PLP come in, we better have a voice in there who could speak out and up,” McAlpine said.

The former FNM MP said he was very pleased about the advance poll last Thursday.

“The advance poll was very good and well attended, and I can tell you from my poll workers who work on Thursday, I had already had 100 votes in the box already. I feel am very confident. You have never heard no independent get this kind of traction in GB like you hearing right now. I intend to win,” he said.

“I am feeling great, Mr Bootle said. The advance poll gave me confidence that come September 16 we have an excellent chance of being victorious. And that’s what my team and I are looking forward to.”

He said he also grateful for the endorsement of Mr Ingraham.

“I am grateful and I am humbled that the former PM came out and gave me his endorsement - that speaks volumes what he had to say.”

Mr Bootle said that once elected he intends to implement a 16-member Consultative Committee, comprising the 16 polling divisions in PR so each will have their own representative to find out what the needs are in each division.

“When the FNM came to power, police officer received several raises, and I remember when the PLP was elected they took back every dime of the $1,400 because they felt the police did not support them, and under that administration we never got a raise,” he said.

Now unwillingly drawn into the financially blinding spotlight of the much-promised, now officially declared a failed sale of the $260+ million, your Red government has dumped into the Grand Lucayan Hotel.
— A full one-third+ of yung and female eligible to vote on Thursday the 16th Day in September, — will individually get to mark their deciding Xs, alongside a political party's, or independent candidate, — whom they believe can best represent the mounting by the minute, pressing financial and health risks needs of Pinerige's constituents — during a new House of Assembly in session. —
Please turn out this Thursday day to safely discharge** your most sacred of Civic duties, — Yes?

"Mr Bootle said that once elected he intends to implement a 16-member Consultative Committee, comprising the 16 polling divisions in PR so each will have their own representative to find out what the needs are in each division.".

DO YOU MEAN HE DON'T ALREADY KNOW THE NEED OF THE CONSTITUENCY?

AND HE INTENDS TO DELEGATE HIS DUTY OUT TO OTHERS. McAlpine knows and continues to voice and meet the needs of Pineridge. Pineridge voters must not be fools. Vote for McAlpine.

Pineridge voters need to realize that every strategically important person involved with our financial, economic, and socio-political affairs is watching their choice of candidate.

I really hope that the voters of Pineridge themselves realize how important they are right now to the rest of The Bahamas. They need to be strong and faithful to the one voice which stood by them through thick and thin. They ought to support Frederick A. McAlpine.

THE FUTURE OF OUR COUNTRY DEPENDS ON THE DIRECTION YOU TAKE PINERIDGE.

PLEASE, YOUR VOTE FOR FRED IS A VOTE FOR US ALL TO MOVE AHEAD.

So I ask you again. “What can Fredrick McAlpine do for the people of Pineridge as an independent representative”? When you’re an independent candidate you’re in a no man’s land. Not only do you not have the support and financial resources of a party, but you also have the government and the opposition undermining your efforts. It renders you virtually powerless to extend meaningful aid to your constituents. I understand that each constituency is allocated approximately $100,000. But this is mere pennies when it comes to supporting an entire community. So what is Fredrick McAlpine’s plan to help Pineridge when he has no money and no power in Parliment?

It’s quite easy to discern Fredrick McAlpine’s motive within these general elections. He’s simply one of a dozen disgruntled, dissenters who were once FNM members of Parliament. His motive at this point is to undermine the FNM party by scattering votes within the Pineridge constituency with the hope that it will ultimately cost the FNM this seat. His actions have less to do with the people of Pineridge and more to do with his personal vendetta against Hubert Minnis. It’s an effective strategy that’s all too common in Bahamian politics. Branville McCartney did it to Hubert Ingraham too. So I wonder what Reece Chipman and Vaughn Miller are planning on doing to undermine Hubert Minnis.

This is so true

When McAlpine won the nomination for Pineridge , I spoke with some FNM supporters and i predicted correctly all that has transpired with him, because he was never a team player and if he did not get what he wanted he would grumble loudly. All the noise that he has been making is just so that he stays in people's minds. All his former church members can attest to it and he is always right about everything. when you think about it, his surname starts with an 'M' and ends with an 'e'. he always believed that he was destined to lead and would accept nothing less.

how everybody hear they win from the same advance poll?

i could use a purple tshirt. my favourite colour, then green then red... I dont like yellow. nothing to do with politics. They didnt consult me when they chose the colours

McAlpine is another Bodie, political mercenary aka prostitute.

He needs to enjoy his happiness now, come tomorrow he will eat those words...he didn't do thatt much for Pineridge. He has to remember he got in on an FNM ticket.. all of these didn't get converted to Independent.