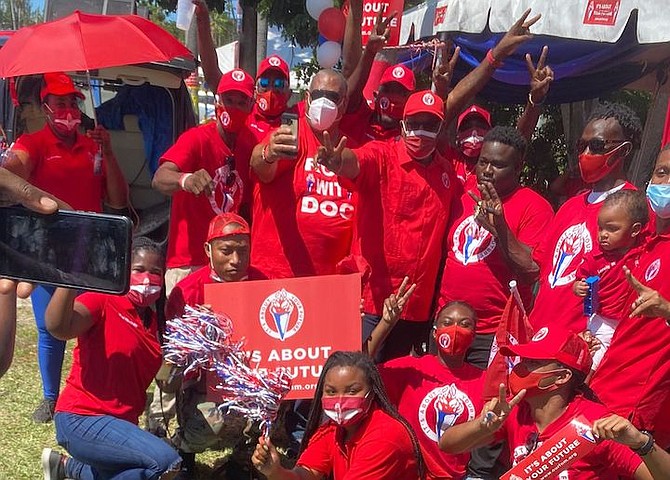 AFTER voting in the Killarney constituency, Prime Minister Dr Hubert Minnis responded to criticism that the early election was ill-timed as the country continues to battle the COVID-19 pandemic.

Critics, including some of the nation's foremost physicians, have expressed grave concerns that the nation’s public healthcare system will continue to teeter on the verge of collapse as they predict increased virus cases. The situation has led to stressed resources for months.

“I would only say when is the best time?” Dr Minnis said after both he and his wife Patricia voted at New Providence Community Center on Blake Road.

“We say we need an extra six months to come out of the pandemic, you think they would?

The Tribune canvassed many polling stations where most voters said the process was smooth and went by quickly. Some, however, said they were not pleased with insufficient signage at stations leading to some confusion in locating polling divisions.

“It was very simple and straightforward. In terms of protocol, the protocols were excellent so there was no possibility of any form of viral exposure,” Dr Minnis said.

He also said: “I think everything is a learning process and you learn from history. That’s how you advance your country, and the advanced poll may have had one or two glitches however they worked it out and everything went smoothly. From what I have seen here everything is going very smoothly.”

Asked whether he had concerns about low voter turnout, Dr Minnis said he was of the view that Bahamians were very anxious to vote as it was their constitutional right.

He said he anticipated that at least more than 90 percent of the electorate would turn out to vote.

Why is the man that PM has his arm around unmasked?

@ComradeDonAnthony, the 2021 Election is still a moving picture — Reports, I'm privy to, — points something — big may be happening as closing 3 tense hours, — fades into election history, — Yes?

... the 3 unmasked people in the picture (baby included) is a summary of Minnis's administration -- politics is more important than lives. Not sure "Brave" would have done any better!

This man makes tge wirst decisions because he ignores half of the data points. Did those countries call an election in the middle of the worst surge theyd experienced to date?

Not surprised at the low voter turnout. Said so from last year and I believe before COVID showed up, the FNM was counting on people voting for them because they didnt want the PLP completely ignoring the fact that there was a constituency of people who'd already decided not to waste their time on any of the lot

Nice job treating every voter like they had COVID

Calling and early election leading to an early cut-ass!

The Tribune reporters are shell shocked and will not report the FNM loss.

The results are fine with me. I have been trying to think of what to do with my one acre of crown land, and hadn't yet come up with any plans. At least now i don't have to. My landlord is pleased also.

He though that Bahamians could not wait for May 2022 to re-elect him. It reminds me of the Perry Christie's referendum on gambling. These politicians are totally disconnected from reality.

As soon as they won, every last one of them immediately forgot the people and jumped in bed with special interest groups.

This is why the people have to vote them out every 5 years!

That is what happens when you rely or foreign advisers to give crucial advice. You cannot quantify the culture and emotions of Bahamian people, neither can you discount the value it has in decision making. Minnis had November, First part of December, January February aMarch and several months to call ‘early’ or snap elections. But he chose to play a mind game. He bet wrong and called the election in the height of the pandemic when Bahamians were seeing friends, family and loved ones die like never before. Minnis can justify keeping churches and beaches closed, limiting or having funerals and weddings and other social events . But dragging Grammy or papa out in their wheelchair or with their canes to vote and standing in long lines. Minnis hosted the most and largest super spreader events in the country, including the early polls and the general elections. He spent his entire campaign attacking Brave Davis but not giving Bahamians answers then wanted or needed. And the Bahamian people wasn’t playing that game . So Minnis suffered probably the greatest defeat in the history of Bahamian politics. And Bahamians still don’t know why he called an early election.