Host Of Top Ministers Swept Out Of Office 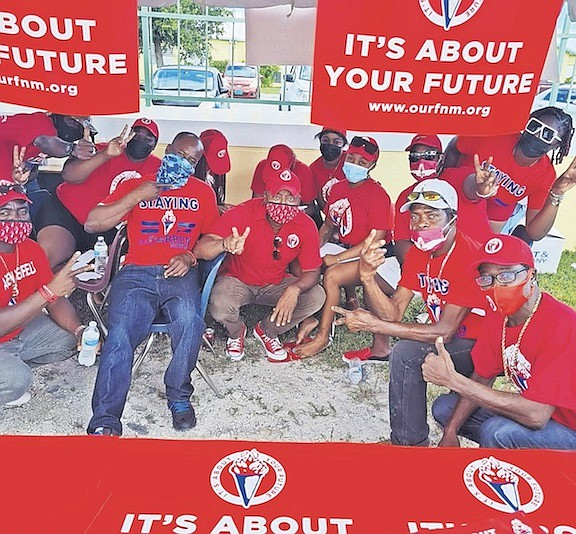 DARREN Henfield with supporters at Central Primary School in this picture posted to his Facebook.

A MAJOR upset at the polls yesterday has left many Free National Movement Cabinet ministers without a seat in Parliament as The Bahamas ushers in a new Progressive Liberal Party government.

Although the full results were not known yesterday, only a handful of FNM members of Parliament retained their seats. The ministers of health, tourism, environment, foreign affairs, national security, disaster relief and education were all voted out of their various constituencies according to the unofficial results available up to press time.

The results are a far cry from the FNM’s landslide win in 2017 when it secured 35 seats in Parliament.

Shortly before 9pm yesterday, it was evident that the PLP would be the next government of The Bahamas. Around that time, former Minister of Foreign Affairs Darren Henfield conceded to Kirk Cornish as the new holder of the North Abaco seat in Parliament.

OUT: Dr Duane Sands lost his seat in Elizabeth.

Abaco has expressed serious dissatisfaction with the Minnis administration over the handling of Hurricane Dorian and have sent a strong message by the rejection of Mr Henfield at the polls.

“It was an honour to serve,” Mr Henfield said. “Never in my life did I imagine serving my home in the House of Assembly and you all made that a reality. You have (given) me an opportunity to show why Abaco is the most resilient place on earth. You’ve shown me so much love and unwavering support. You all are still my family. I appreciate you. I thank you and I love you.

“Congratulations to the incoming member of Parliament Kirk Cornish. You’ve ran a fine race and today will be the start of your service to a great constituency. I make a commitment to do my endeavour best to assist you in any way possible. To all my family, friends and supports, this is not the end. There is still more work to be done and I will ensure that we still do it together, hand in hand, you and me.”

Despite coming under heavy attack from the PLP over contracts issued by the Water and Sewerage Corporation during his tenure as executive chairman, Adrian Gibson regained his seat in Long Island.

Speaking to The Tribune, he said, “I am super excited. I want to thank the people of Long Island for their support and for sticking with me. I commit to continue to fight hard in their interest and the matters that concern them and to redouble my efforts to fulfill my pledge to make and keep Long Island great while securing a brighter future for Long Island.”

VOTERS in Yamacraw, where Elsworth Johnson has been ousted as MP and replaced by Zane Lightbourne. Photo: Earyel Bowleg/Tribune Staff

The Tribune also spoke to former Minister of Immigration and Investments Elsworth Johnson, who lost his seat in Yamacraw. He said now is the time for the FNM to regroup.

“In The Bahamas I am grateful to God that we have a mature democracy that’s peaceful and that governments can have a regard to what is happening around the world,” Mr Johnson said. “I commend Mr Lightbourne on his victory and I thank God that I had an opportunity to serve. The FNM will regroup. Again I am grateful to God that I had the honour to serve the Bahamian people. On behalf of my friends and family, I would like to thank all the people who supported me. I am grateful for all the encouragement and prayers.”

Incoming Deputy Prime Minister Chester Cooper said the PLP’s celebration will not be long as there is lots of work to be done.

“I am thankful to my campaign team. They have all worked in a superb manner. I am thankful to my wife and family. I am looking forward to participating in the new government. I am very excited about shaping policy and working along with the new team to advance our country. We have great plans and now we will executive.

“The celebrations will be short lived given that we have a very serious crisis in our country. We will get to work swiftly on the many problems that confront the country including the economic and health crisis. Tomorrow is a new phase. We have successfully kicked Minnis out of office and now the hard work begins to reshape our country.”

Observers will watch the FNM to see what direction the now former governing party will take after yesterday’s loss.

Them MPs executed extreme subservience, they must have their rewards in the clouds.

Guardian's Talkie Show Host, The Most Humble Juan, — asking radio station's management to do please check with The Utilities Regulation and Competition Authority (URCA), — if under ARCAR's Rules, — as to the position of the station's Flag — when flying at half-mast — in memory of the former South Beach's, soundly defeated Jeff,— if it will all depend on its size, the length of the mast, and its location out front of the station,— so flown as it — wouldn't be seen as a — slap in the face, — to the landslide elevation of PLP's Brave, — into the Office of Premiership (OOP), — Yes?

Team Comrade, — the Most Humble Juan, with Sea Breeze's voters havin' delivered direct hit face TKO to his Idol, Jeff,— is one for two, — Well, Juan still has left his nature's healin' answer to all cure's, — his frequent on-air Guest, — Yes?

Dr. Sands was.endorsed by The former Prime Minister Hubert Ingraham. What does that say about his clout with the people? They can not use Hubert Ingraham to endorse them again.

Of course they can. FNMs even disaffected FMNs love Papa. The election was a referendum on Minnis and I think Elizabeth is naturally a PLP seat, so he had an uphill battle. If Sands had run in St Anne's he would have won for example

So sad that Dr Sands didnt win. I hope they include him in some way. Our salvation is in using all of our talented people. I said in 2017 it would have been good if Minnis could have given Komalafe a posting, little did I know how petty and victimizing he was

Can you imagine the dead weight a Prime Minister would have to shovel out of the way to even get near talented people or to get talented people to opt in?The decades people spend in either party trying to get to the top, to move from dust to crumbs, stay in favor. Therein lies the problem, Party structure. Loyalty over substance.