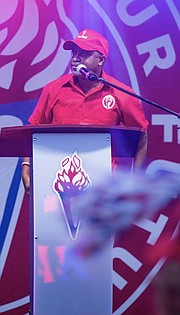 KWASI Thompson thanked supporters after he was elected as the new member of Parliament for East Grand Bahama.

He was grateful to the residents of the constituency for their support and has pledged to continue to serve and fight with a passion on behalf of the people. He also thanked his campaign workers for their hard work.

The Free National Movement lost significant ground in this election after previously winning all five of the island’s seats in 2017. Unofficial results pegged the Progressive Liberal Party’s Ginger Moxey as the incoming representative for Pineridge and former Tourism Minister Obie Wilchcombe as the incoming representative for West Grand Bahama and Bimini. However the official results were not known up to press time.

“I want to first of all give God thanks for all of the persons in East Grand Bahama who supported me,” the Free National Movement member said. “I want to say it was a humbling experience to have so many persons in East Grand Bahama give us their support. I want to thank my team who did a tremendous job; they worked tirelessly in a very short period of time to bring the result we got.”

Mr Thompson also thanked the people of Grand Bahama for their continued support of the Free National Movement.

“I said prior to the election that whoever wins come September 17, the same challenges that were there on the 16th will continue to remain there on the 17th. So, the focus still has to be one solving the problems of Grand Bahamians.”

Without missin' a beat, — East Grand Bahama's, Kwasi Thompson, was quick to microphone to confirm. — He remains, — 101 nautical miles east from acknowledging the utter lies, — Spoken as Promises, — which were made to Grand Bahamalanders.
Yes,— acts, committed by his, — Kwasi Thompson's, — now reduced to being disgraced, shamed, and cursed at,— Red Party's, — 2017's, 39 House-elected MPs?

The despicable “Red” post Hurricane response may be forgotten by the handful of folk in Ragged Island … and even the few remaining in East Grand Bahama … BUT NEVER EVER the proud and industrious independent thinking people in Abaco!

Surprisingly, even the political machines, numerous agents who were well position across Abaco's islands, cays, towns, and settlements — On election day, were finding it difficult getting a credible read on which way, Abaco's two House seats would swing, — Proving yet again, that, — Abacoians, IS more about — Doin,' not idle talkin. — Yes?

Kwasi needs to support Pintard taking the opposition leadership roll away from Minnis before the new parliament begins.