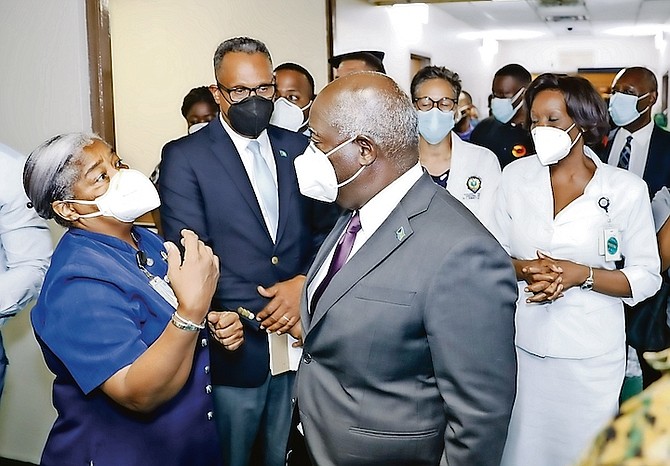 THE next 100 days in office for the Davis-led administration will see an aggressive push to fight the COVID-19 virus beginning with keen interest in the “dismal” Princess Margaret Hospital alongside an in-depth look at the country’s finances.

According to Prime Minister Philip “Brave” Davis yesterday, the public healthcare system is a high priority for the government after it was ravaged by three waves of COVID-19 and in recent times the Delta variant, which led to increased cases and deaths.

While there were only 39 cases reported in the country as of Monday, there have been 20,288 COVID-19 cases since the start of the pandemic.

Five hundred and twelve deaths have been recorded, with two new fatalities recorded on September 9 and September 20. The victims were ages 73 and 70.

PMH continues to bear the brunt of the stress-induced by COVID-19, including at the morgue where over 320 bodies are being stored.

Mr Davis said there were some glaring issues highlighted during his first tour of PM as prime minister and after discussions with doctors and nurses who’ve been fighting on the front lines.

“First of all we are in a health crisis and, of course, no doubt an economic crisis and until such time as we get the health crisis under control and have the right path towards a proper and effective fight against the virus we will not be able to get our economic situation under control,” Mr Davis said yesterday after touring PMH.

“So, today I’ve come here because I realise and appreciate what needs to be done from the outside,” Mr Davis said.

“I am now on the inside and ensuring that I have a full picture of what is happening. What I can say is that having spoken with Dr Dahl-Regis, (Vaccine Consultative Committee chairperson) on Friday right after my swearing-in because as I indicated that was the first challenge.

“There is some urgency of getting this virus under control so I met with Dr Dahl-Regis on Friday. I met with the doctors and nurses today along with the Minister of Health (Michael Darville) and we’ve gotten a picture from their perspective of what is happening in this fight against the virus. It’s bleak.”

Asked his impression of PMH, he said: “The healthcare system is a high priority for us. At the moment the system is such that it has been overwhelmed by COVID cases and that has to be addressed first to determine exactly what we do.

“I have to sit down now with my minister of health and we’ll craft a way forward and in the immediate term, we’ll have some short-term solutions to what we see here.

“It is accepted by all that the state of the hospital is dismal and we need to address that.” 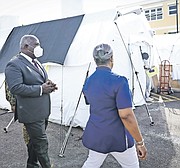 While he could not say what would be done in the immediate term, insisting there was a need to gather more information, Mr Davis said the next 100 days in office for his government would have two main focuses.

“(The) second step we will then address the economic issues that face our people and we’re now going to be aggressively looking at the state of our finances to determine what we can do with what we find and we will let the Bahamian public know what we have found.”

Mr Davis’ tour also took a look at ongoing construction at PMH. He said from what contractors have said, the completion timeline is unacceptable.

“From what I am hearing from the contractor because of the number of cases of COVID virus that’s impacted even the care of the ordinary ill patient. It has disrupted the manner in which they could proceed with their work and so they’re working at night and intermittently so as to accommodate the hospital providing services to people who need it and that has impacted the timeline for their finishing.

“They did indicate that if it continues this way the work could continue well into the 2023 and we were just saying that’s not an acceptable time, but I understand the factors that has interrupted the work and has caused the work to be extended and I think we will sit down to see how they can work around all those issues,” Mr Davis said.

Not really ready on day 1 then, as this was all stuff that was already known.

boy people really sour, sad part is after 4 years this had to be done in the first week of a new administration but never under a 4 year old admin. wow is all I can say

(The) second step we will then address the economic issues that face our people and we’re now going to be aggressively looking at the state of our finances to determine what we can do with what we find and we will let the Bahamian public know what we have found.

In order to get to step two you have to recognise that the step one is irrelevant/impossible because there is no good answer to fight virus - lockdowns, school closures, masks, social distancing and even vaccines has failed - the only way through is through treatment, focused vaccination in 'covid season' [just like we used to do with the flu] and acknowledgment of natural immunity and that vast majority of society is not risk from the virus. Brave had it already he should now..

They also said from day one , they will hit the road. What about VAT? You have to have a meeting then say the way forward. That doesnt sound like , from day one.

Davis made a grave mistake in appointing Darville minister of health. His track record as minister of health under the last Christie-led PLP administration left much to be desired. Also, Darville is known not to be too concerned about conflicts of interest involving government and his own private business affairs.

Remember the days when 2 cases a day was a concern. Now its like oh only 5 people die this week? It would be good to know the health status of these people with the dashboard

Were they "payin" any attention during the last 4 years?? My my my. . .don't tell that we must go through this "blame game" all over again?

I am not sure this guy ever been to the hospital even as a patient, even more so when he was in Min. oF Works. He always could afford private doctors, even when he had COVID he was not in there. My guess is he is finally seeing it for what it is. But still, its much better than the RMH, so glad he promised us a new one

Politicians in the Bahamas are actors. They like to appear unware of the many problems this country faces. The situation at the hospital has been know for some time. The question should be how this government intends to fix it or at least alleviate it.

That’s what I’m saying! Brave Davis mussie tink people fool! He knows first hand that PMH is a dump! After all, he helped get it there! Brave Davis knew that the PMH was a hovel! That’s why he jumped on a private medivac jet and high-tailed it to the U.S. when he got COVID. Stop playing games bey, Brave! Wit ya porky head!