‘It’Ll Mean The World To Me’ 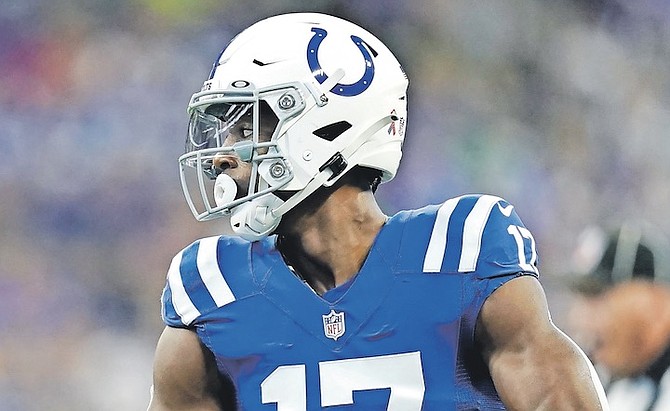 INDIANAPOLIS Colts wide receiver Mike Strachan (17) in the first half of an NFL football game against the Seattle Seahawks in Indianapolis on Sunday, September 12. (AP Photo/Charlie Neibergall)

As injuries continue to mount for the Indianapolis Colts’ receiving corps, Mike Strachan is on tap to receive more opportunities and is also just weeks away from having the opportunity to play an NFL game in front of his entire family for the first time.

Although he was targeted just once with no receptions in last Sunday’s 27-24 loss to the Los Angeles Rams, Strachan played 33 snaps on offence, the third most of any Colts receiver.

Strachan was listed at wide as a second string on the depth chart for the upcoming week three matchup against the Tennessee Titans, behind Parris Campbell.

Campbell was inactive for last week’s game against the Rams and was limited in practice Wednesday due to an abdominal injury.

In week one, Strachan finished with two catches for 26 yards in the Colts’ 28-16 loss to the Seattle Seahawk. He earned a pass interference penalty on a third target. All three of those plays came on third down and resulted in Colts first downs. Strachan was on the field for 18 snaps and was targeted three times, a higher rate than any other receiver in the lineup.

His mom, sisters, brother, uncle and two cousins were in attendance at the home opener and his father will join the remainder of the family and attend the Colts October 3 matchup in week four against the Miami Dolphins at Hard Rock Stadium in Miami, Florida.

“It’ll mean the world to me,” Strachan told Colts.com when asked about his father having an opportunity to attend an NFL game. “He was the one who brought me up and helped me, teaching me to learn receiver. He also played receiver. So for me to go out there and show him all he’s taught me throughout the years is going to be special for me, it’s going to be emotional.”

The Good Morning Football crew surprised Strachan live on air with the announcement that his parents would attend the game courtesy of Bahamasair.

As for the remainder of his family at the week one opener, Strachan said he looks to continue his production with the added motivation of family in the stands.

“It was definitely special,” Strachan said. “A lot of emotions going on. I was just out there doing my job, when the ball comes to me, I have the mindset to make the play. For me to go out there and perform in front of them, it’s a special thing for me.”