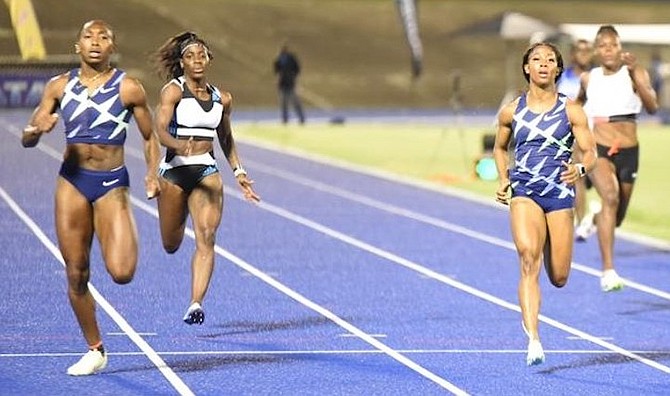 SPRINTER Anthonique Strachan and quarter-miler Steven Gardiner were both in fine form as they led a contingent of elite and collegiate athletes in action in various meets in the United States and Jamaica over the weekend.

In her biggest victory in the resurgence of her season so far this year, Anthonique Strachan sped to an impressive come-from-behind performance in the final 30 metres in a season’s best of 22.55 in the 200 metres on Saturday at the Velocity Fest II, a World Athletics Continental Tour Challenger Series Meet in Kingston, Jamaica.

Strachan’s former training partner Shelly-Ann Fraser-Pryce, the multiple World and Olympic champion, faded to second in the winding 10m in 22.79 as she made her season debut. Natasha Morrison was third in 23.06.

“I feel great about the performance no matter the results,” Strachan said. “I was able to walk off and that’s all that matters. The competition was healthy as always.”

“I expect nothing right now really from my races,” said Strachan as she moves closer to achieving one of her goals of not just getting into her first senior global final, but possibly getting on the podium with a medal.”

The World Athletics Championships in July in Eugene, Oregon is the target for Strachan, who has not had any international success since winning the Central American and Caribbean Championships’ silver medal in the 200m in 2011, a year before she did the sprint double in the 100 and 200m in Barcelona, Spain in 2012 at the World Under-20 Championships 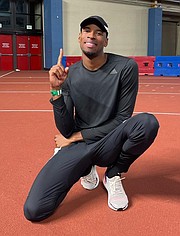 Gardiner, 26, finished comfortably ahead of Vernon Norwood of New Balance in 44.59 with Matthew Hudson-Smith, unattached, third in 44.61.

In the process, the Bahamian national record holder surpassed the previous world leading time of 44.28 done by Michael Cherry on April 16.

Also at the meet, Grand Bahamian sprinter Brianna Bethel, competing for API Athletics after her sting at the University of Houston, got 13th overall in the women’s 200m in 23.97. Thelma Davis of LSU won the event in 22.86.

World Indoor Championships’ silver medallist Devynne Charlton picked up a second place in the women’s 100m hurdles in 12.89 in her outdoor opener to lead a few Bahamians competing at the Kentucky Invitational on Saturday at the Outdoor Facility in Lexington, Kentucky.

Kentucky’s junior Masai Russel clocked 12.71 to win the event. Russell had the fastest qualifying time of 12.90, while Charlton was pegged in 13.13 for the second fastest time.

In the women’s 4 x 400m relay, Moss ran the opening leg of the Wildcats’ B team of Dynasty McClemnon, Shadajah Bullard and Masai Russell finished second in 3:40.97. Kentucky’s A team won in 3:25.79.

Kentucky’s freshman Jaida Knowles had the ninth and final qualifying spot of 12.19 to advance to the final, but she didn’t start as Kentucky’s top qualifier Dajour Miles won the event. The sophomore did it in 11.52.

Ohio State’s Shaun Miller soared 2.16m to win the men’s high jump on Saturday at the Jesse Owens Classic at the Jesse Owens Memorial Stadium in Columbus, Ohio. Andrew Taylor of Wheeling was his nearest rival with (2.13m) for second.

Miller’s teammate Oscar Smith pulled off the victory in the men’s 110m hurdles in 13.56. Smith had the fastest qualifying time of 13.75 in the preliminaries.

Johnson and Rolle in Florida

At the Pure Athletics Spring Invitational at the NTC Training Center in Clermont, Florida, Printassia Johnson of Power Athletics posted a fourth-place finish in the women’s 200m in 23.74. Corinna Schwab of Track Team Germany won in 22.72.

Marissa White, a senior at Temple, clocked a personal best of 53.84 at the Virginia Challenge at the Lannigan Field at the University of Virginia in Charlotte, Virginia. Her nearest rival was Elena Brown-Solar in 53.84.

Gaither in action in Waco

Tynia Gaither, competing for Adidas, raced to third in the women’s 200m in 23.23 at the Michael Johnson Invitational on Friday at the Clyde Hart Track and Field Stadium in Waco, Texas. Rosemary Chukwuma of Texas Tech was the winner in 22.97. Tamar Clark of Adidas got second in 23.04. Gaither was also fourth in the 100m in 11.02 on Saturday. The race was won by Brittany Brown, also of Adidas, in 10.66.

I saw that race, it seems that Fraser literally slowed down or turned the burners off in the last 30 feet. She did a Bolt.