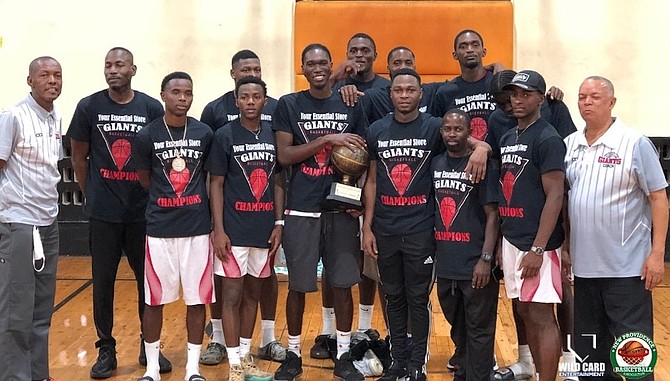 WE ARE THE CHAMPIONS - NPBA Division II champions Your Essential Store Giants.

AFTER leaving his Your Essential Store (YES) Giants with a 2-0 lead in their New Providence Basketball Association men’s division II championship series, coach Mark Hanna said he was disappointed to come back and see that the Sun Oil Rockets pulled even at 2-2.

In the fifth and deciding game on Friday night at the AF Adderley Gymnasium, Hanna had his Giants firing on all cylinders as they blew out the Rockets 87-72 as they led from start to finish to eventually win the title, thanks to four players scoring in double figures.

The game was marred by several interruptions as officials tried to clean up the water from the leaking roof from the down pouring of the rain on the outside. But despite all that transpired, Hanna said the goal was for his Giants to do what they didn’t do in the past two games.

“When I went away for the Easter break, I left my team undefeated, so I was surprised to come back and see the series tied up,” Hanna said. “The Rockets are a very good team, coached by Moses Johnson, but we were a much better team. We didn’t play up to that standard until we got back tonight.”

Hanna said he was extremely proud of his players. He noted that they worked hard in practice to ensure that the title didn’t slip away from them like it did in 2020 when they made it to the final for the first time.

This year’s championship was a conclusion of the 2021 season that was disrupted because of COVID-19.

The Rockets were out to add a double crown to the one their division one Discount Distributors won in a three-game sweep over the Commonwealth Bank Giants.

But coach Johnson said while they gave it a gallant effort, once the Giants got a roll in the second quarter, it was harder to catch them especially with all of the delays in the game because of the wet floor from the rain. “We started to make some good runs then we had to stop because of the wet floor, but notwithstanding that, hats off to the Giants,” he said. “They played an excellent series, they were poised and coach Mark Hanna had them ready for this game.”

Johnson, who is also on the coaching staff of the men’s national basketball team, said his Rockets will go back to the drawing board and get ready for the start of the 2022 season in October.

As they celebrate, Giants’ overall head coach Perry Thompson said they dedicate their victory to their sponsor, Raymond Knowles of Your Essential Store, for stepping up to the plate to support their team.

“I’m happy to see that Mark was back in town and he did a tremendous job in preparing the guys for the final game,” Thompson said. “He made some adjustments defensively and we were able to take control of the game from the jump ball.

“The guys they followed the game plan. They executed it very well as a team, so I’m very proud of these guys that we assembled and put together and to come out as champions. Now it’s just a matter of getting back to the drawing board over the summer and to see how we can improve both the D1 and DII teams.”

League president James Price said it was good to come back to complete the postseason in the aftermath of a two-year hiatus because of COVID-19.

He thanked the fans for showing up to support their teams. “It was a step in the right direction,” he said. “But we have some concerns about the gym. As you see, we had to deal with the issue of the water pouring from the roof, which forced us to stop the game a few times. “We hope that by the time we are ready to start the new season in October, the government would have made the necessary repairs to the gym because it wasn’t easy playing under the conditions that we did tonight.”

Anderias Black powered his way inside for 13 points, 14 rebounds and three steals and Adrian Thompson added 10 points with 15 rebounds, four steals, three rebounds and as many blocks. Cormardo Strachan helped out with six points and eight rebounds and both Brandon Strachan and Edward Williams finished with five points.

The Giants stamped their approval on the game from the first quarter when they surged out front by 10 and eventually posted a 24-15 margin at the end of the first break. With eight minutes to go in the second half, the game was halted with the Rockets trailing 27-17 to allow the water to subside a bit from the leaking roof.

Once they resumed play, Commonwealth Bank continued their aggressive style of play as they ran the floor and stacked the basket, securing a 47-25 advantage at the half. To their credit, Sun Oil stayed in the contest as they knocked down some big outside shots for a 66-50 deficit at the end of the third.

But in the fourth, every time the Rockets made a dent into the lead, the Giants answered with a run of their own and they managed to stay in control of the game to earn the rights to celebrate as champions.

Commonwealth Bank out-rebounded Sun Oil 75-55 and had eight less turnovers (22-30) in a game that had one lead change that came at the start of the first quarter. The Giants managed to open as much as a 25-point lead in the third quarter.