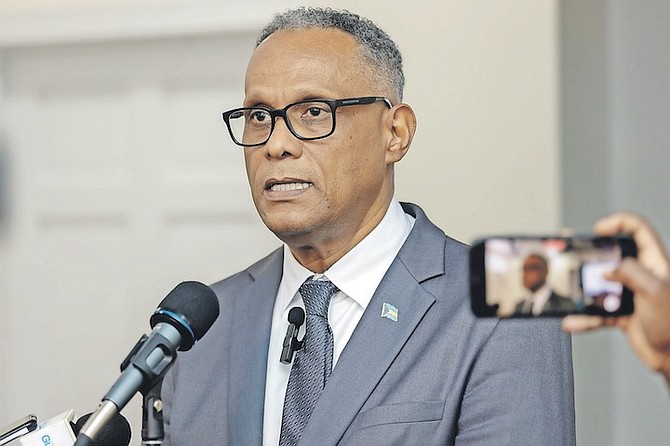 HEALTH and Wellness Minister Dr Michael Darville said yesterday that officials are hoping to have 70 percent of the population vaccinated against COVID-19 before lifting the remaining mask mandates in the country.

He also said the government is hoping to reach its vaccination goal by the end of the year.

“We are now somewhere between 54 to 56 percent and I say that very loosely,” Dr Darville said yesterday ahead of a Cabinet meeting. “We have now brought in the paediatric vaccines as well and we’re hoping to reach 60 percent within a few months and hopefully, reach our target of 70 percent by the end of the year.

“Once again, we’re pleading to the country and those who have not received vaccines to please come forward and get their first and second jab and for those who need boosters, the centres are open. Let us begin to work together to achieve the target of 70 percent in the country by the end of the year.”

The government’s push to get more Bahamians vaccinated comes amid heightened calls for the remaining mask mandate to be removed.

While mask wearing is not required in outdoor settings, it is still largely required indoors.

Speaking on the issue last week, Prime Minister Phillip “Brave” Davis told reporters government would consider removing the COVID-19 protocol if another 20,000 people were to get vaccinated.

Asked yesterday what officials considered the ideal number of people to be vaccinated to lift the measure, Dr Darville said there was no ideal number.

“There’s really no ideal (number),” he added. “It is a lot of associated factors within country. One of the things that we’re committed to is the World Health Organisation’s mandate for 70 percent of the population to be vaccinated by the end of the year.

“It’s out there. Many other Caribbean countries are trying to meet that particular target. The reason why that’s important is because we believe that if we get at that level, it will prevent a large influx of individuals to our hospital systems in the event that we start to see higher instances of COVID in country.

“Fortunately for us right now, the numbers appear to be trending downward and we have already petitioned the CDC for us to go back at Level Two, which is important to us in our tourism sector as well as our economy.”

He also said once the country meets its vaccination target and virus cases and hospitalisations remain low, “we will be able to reduce or even remove the mask mandate”.

Previously, only people aged 12 and older were eligible for doses in the country; however, children aged 5 to 11 years are now able to have access to COVID-19 vaccines thanks to a donation of 24,000 paediatric doses from France last month.

Dr Darville said since the government launched its vaccination programme for children last week, there has been a good turnout.

“We launched on the 28th,” he said. “We had a very good turnout. I think about 63 to 68 young individuals received the vaccines. We’re starting vaccinations again today (Tuesday) and we have about 66 bookings and a lot of walk-ins and so we’re watching it very closely because we’re just ironing out the kinks here in New Providence and of course, we’ll be rolling it out in Grand Bahama and the Family Islands as soon as we work pout all of the logistics and the timing for each clinic.”

Yesterday, Dr Darville was also asked how soon vaccines for the monkeypox virus could be in country.

However, he was unable to give a timeline, only saying “it would be sooner than later”.

He added: “We have been working from day one with our partners at the Pan American Health Organisation. We are definitely in the community. We are presently starting consultations with those in the border, customs and immigration and some of our uniformed individuals. We are presently reaching out to high-risk groups in the tourism sector and so the list goes on and on and so we’re working very closely with PAHO and we realise that it’s important for us to stay on top of it.”

The World Bank and IMF wrote us warnings that The Bahamas cannot return to restrictions in education availability, covid business restrictions transactions and that that we lost 9.7 billion dollars in cash-from your hand to in -hand-to-hand money circulation. According to UNESCO the world lost our pre school early learning ABC 123 friendships socialization and away from home basic maturity independence mind formations. With zero medical benefits, that our Governor General has received vaccine 1-2-3-4-5-6 and still got covid why is vaccination failure being enforced like a Blackmagic satanic obeah ritual to get a job or enter school? Money motivated Judas. The Bahamas is ful of Judas'. Even as medical doctors here and around the world that the vaccines are also killing Bahamians, the poor Hippocratic Souls know their monetary and spiritual graves.

I think this guy may have got his doctorate off the internet?

So why are you cursing the internet but also use it. Just get a compass and pen then mark every sqft of Ballou Hill Road. Smart person.

that wasn't my point... I agree with your point above...the 'DR' doesn't seem to provide evidence as to the correlation between masks and vaccines

Health and Wellness Minister Comrade Dr Michael Darville shouldn't have been hoping to have 70 percent of the population see the benefits of being amongst our colony's vaccinated against COVID-19 before health officials completely remove the remaining face covering mandates in the colony.  More than 13 billion free doses of life saving jabs have now been safely jabbed into arms popoulaces' globally. .. Hundreds of millions populaces' were not left crossing fingers and hoping to avoid hospitalization. ... The minister's time can best be utilized fix Prince Margaret Hospital. ... And straighten out the profiteering and diverting healthcare assets enriching private hospital shareholders..― Yes?

Bottom line. The computer mind that funds the WHO=PAHO AMERICAS - Caribbean/ Agencies for Africa and EU G7 States, The Russian Federation, India with South Asia, Oceania with the Pacific's all share a divergence on vaccination results. Israel, the most scientifically honest nation that follows each vaccinated Jew's health after vaccination is furious that they allowed their people to be quad vaccinated as they have failed the promised immunity guaranteed result after a single shot. They have been bamboozled, screwed, fckd then left to recover millions from adverse side illnesses. Theirs with the USA vaccinated Armed Forces are no longer fighting forces but rely on nukes alone. Then, there is the Ukraine, the grounds where vaccine profits were to spent in Soddam and Gomorrah.where it not for Putin.

No one wears masks now ...... Pointless to try and enforce this stupid rule anymore.

Forget the 70% - it is not based on the current science regarding covid. Think, study, evaluate, decide honestly please Bahamas.

@proffessional. Yea man. Too much gates money being pumped slacked into politicians pockets. Our health don't mean a st. But the computer guy lost his investment Ukraine paradise for non man/woman species. Covid profits dream investment Ukraine hotel and beach utopia for computer guy profits from PAHO/WHO is gone. WHO/PAHO is just dust in the wind and powerless fake.

Please tell me I am wrong on this !

Foolish people, you also need that monkeypox thing too, to get the reward.

What do I know I am just a poor cat!

Really its a farce.. we see junkanoo rushing at independence and all these cookouts and homecomings with crowds in close proximity and no mask.. its just fear of an outbreak and it gets blamed on no mask, so take safe route and do nothing. we will not achieve 70% until.another deadly strain materializes.

It's all too obvious now that this corrupt clown is personally profiteering from the many absurd positions he announces on masks and jabs. Not to mention others in the medical community who have very close ties to this corrupt PLP government led by roly-poly Davis.

We said the same thing about Minnis & his crew

Correct! We should just say Government from now on as party really doesn't make a damned bit of difference.

“Petitioned CDC”…”working with PAHO”… being told what to do and how to do it. 2023 50th anniversary of so-called “Independence” is a sham to true sovereignty. Grow up government people! Some bullies never leave off till you punch them in the face…. with real science facts! Power to the people…remove your mask the minute you leave a mask mandated space and “take a walk” to your car/home.

He is telling us that gates WHO/PAHO will remain terrorizing our bodies to get their failed vaccination. Biden is vaccinated a minimum of 4 times on order to remain fully vaccinated. So just what is PAHO dictating here in The Bahamas that the rest of the world including USA has abandoned. No masked are being worn anywhere in the USA. Under what medical or scientific rule are we to be vaccininated as we await the trivarient Vax being staged but debated for autumn. The science says a new covid strain of unknown power will be with us by the time the triple Vax gets out that once again contain Delta spike mRNA but also Omicron A.4/5 strains. In late 22 or early 2023 a new varient will be out then PAHO will force us to take an octagon vaccine monstrosity. Covid has been declared dead in the UK and across Europe, Africa and South America with the exception where there is heavy WHO interference. The CDC in finding it impossible to persuade Americans using death fear pornography. So in the Bahamas PAHO heavy hands is stabbing jobs and education threats, as something has to work. Problem is, big pharma needs more than 20000 viles of Autumn trivarient to pay off people and Americans, Africans, India, Europe just gas had enough of WHO bs.

Well, now that the American NIH study reported menstrual disruption on 40% of women, many will stop taking the vaccine.

ROE V WADE was a distraction. They are controlling the population growth.

No baby formula, no problema. Roach milk iss a superfood.

I would like to hear how many of the people catching covid now are fully vaccinated. In my immediate sphere of contacts almost everyone has caught covid recently and ALL of them have received the vaccine - and in a few cases the booster as well. I got the J&J jab and have never gotten covid and I never where a mask - unless the store insists on one.

Words come out of politician's mouths and money go into their bank accounts....MONEY MONEY MONEY Why can he not just say, if you want to wear a mask, wear it. Why does everyone have to wear one. We are adults and can look after our own health. Guess it is something to do with MONEY! Politicians have too much power and too many of them are corrupt and greedy. Every person going into politics become rich.

how was that 70% calculated? anything based on science would never been such a round number, rather lets say 65.71% etc

70% is based on the fabled herd immunity, that saw Israel, Denmark, Iceland, Seychelles, USA all come under 100% re infestations and deaths. 70 percent is all about some entity making money and continu⁹ing the stranglehold that is a proven profit maker.

At least the PLP is not carrying out PAHO orders with the extreme arrogance of Minnisitis. We just want PAHO to get in order and offer us advise the world is following.