Political leaders speak out on death 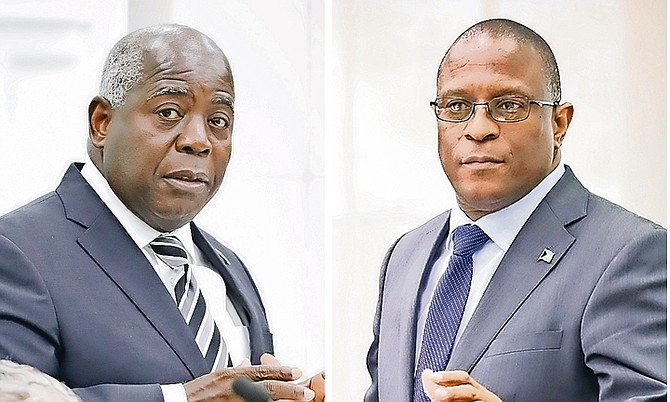 PRIME Minister Philip “Brave” Davis described as “truly unbearable” the death of Omar Davis Jr, saying all must get involved in fighting the scourge of violence in the country at a time when Bahamians are experiencing heavy hearts.

Mr Davis said “we must be relentless” in turning the tide in the nation, as he addressed the murder of the 21-year-old who was preparing this week to return to the United States to begin an internship at a noted audit firm in Atlanta, Georgia.

Meanwhile, Official Opposition leader Michael Pintard said the death sent shockwaves throughout the community and called for all to demand that “senseless bloodshed” in the country come to an end.

“To lose him in this way when he was about to embark on the next stage of his life feels truly unbearable,” Mr Davis said as he spoke at an education conclave at Loyola Hall. “Here we have a young man whose resolve to escape violence had fueled his outstanding achievements in our public schools and in further education. His determination and his success reached and inspired so many.

Mr Davis offered his official condolences and urged Bahamians to pray and come together to stop the spread of violence.

“We pray for God to wrap his arms around the family and hold them tight, just as we pray this for all of our families and there are far too many who lose loved ones to violence. You are not alone. We add to our prayers our shared determination to come together as policy makers, as community leaders, as clergy, families and friends or neighbours to do ever more to fight the scourge of violence even when, or especially when, our hearts are this heavy.”

He added: “We must be relentless.”

“One way to honour the memory of those whom we have lost is to work harder and harder to turn the tide to create hope and healing to prevent future tragedies,” Mr Davis said.

In a statement issued yesterday Mr Pintard also gave his condolences and demanded that the community come together to combat violence on the streets.

He said: “The killing of Omar Davis Jr, a young man with much potential, has sent shock waves throughout our country as yet again, families and the community that have given them birth, record another tragic demise of another young man.

“We must all collectively continue to call for and demand that the senseless bloodshed and human carnage cease on our streets.”

Mr Pintard also expressed condolences for all families that have suffered the loss of someone to murder or violence.

“We also offer our condolences to all of the mothers, fathers and family members of all victims of murder in our country. Please know that each of you are in our thoughts and prayers. Omar’s story and his journey represents a bright light, a ray of hope for our young people, especially our young men, that once you apply yourself there is truly nothing you cannot achieve. His dogged determination to succeed against all odds was and will forever be an inspiration to many,” he said.

On Tuesday, the partially decomposed body of a man was found in a garbage bag inside the trunk of a vehicle near the Centreville Food Market. It was identified as that of Omar Davis, Jr 21. Police Chief Superintendent Michael Johnson added it appeared that the body was in the early stages of decomposition and could have been inside the vehicle for about 24 hours.

Just more political blah, blah, blah blah. It's as if all of these corrupt and most incompetent politicians believe they can magically talk away the many problems plaguing our society.

And these lousy politicians have all come to believe the key to holding political power or getting back in another 5 years at most, is to just blow plenty hot air at the people.

Frankly, it's all they can do because they are so incompetent and clueless about what it takes to govern our nation for the betterment of its people. Besides, many of them are much more concerned about lining their own pockets while they hold elected office.

Over three decades ago, Bahamians bought into the narrative that the murders were about ‘one set of bad boys ( gangs) killing up another set. They were further ‘lotioned’ and lulled into false sense of security that ‘ the general public is safe and can go about their regular activities without being in fear .’ Unfortunately this is not the case, Guns and murder have become embedded in the mainstream culture of the Bahamas and murders are now an everyday occurrence. And because of the Police’s inability to control violent crimes, many young people are seeking to arm themselves illegally to protect themselves. Many Bahamians believe justice for murders does not exist. The practice of charging suspects with murder, then releasing them on bail to be murdered a few years later is not justice. It does not bring closure. And 90 percent of persons charged with murder claim they are innocent. Government must find a way to get persons charged with murder before the courts as quickly as possible. They must be found guilty beyond a reasonable doubt. And once found guilty, they must be isolated from the general prison population and treated like condemn prisoners. Does it take the murder of an exceptional person with a promising future to sound the alarm of how dangerous it is for young men to live in this country ? Not only is the country losing a lot of its young men to murder , but many with means are fleeing to the US and Canada. The future of the country follows them .

If you Google it you will find that about 3% of any population is sociopathic. That translates to about 12,000 sociopathic Bahamians. This does not equate to being evil but it does equate to a need for the correct upbringing and socialization. Draw your own conclusions.